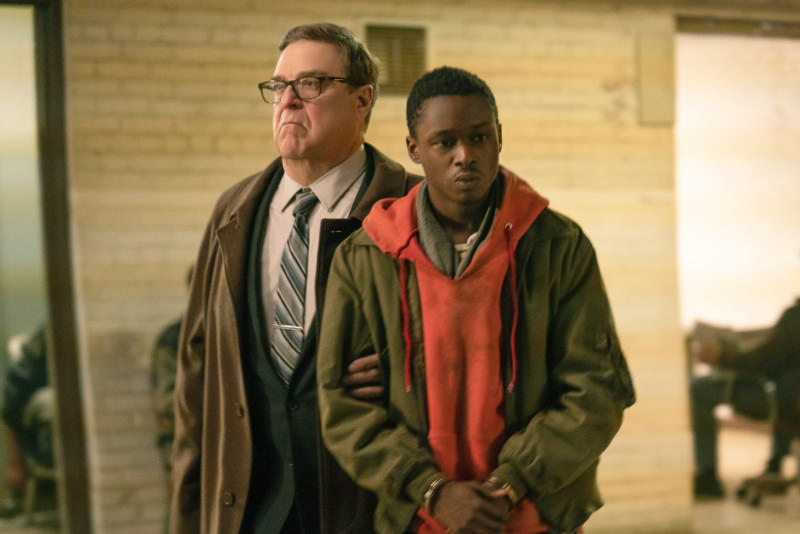 NEW YORK (CNS) — With the sci-fi drama “Captive State” (Focus), director and co-writer Rupert Wyatt has set out to tell a thoughtful, complex story and to comment on a variety of social issues.

But his film as a whole, penned with Erica Beeney, is drab in tone and never quite gels. The inclusion of some gritty settings and behavior, moreover, makes it strictly adult fare.

Nine years after humanity surrendered the earth to invading aliens, young Chicagoan Gabriel Drummond (Ashton Sanders) gets caught up in a conspiracy to rebel against them. In part he’s inspired to do so because his older brother, Rafe (Jonathan Majors), who was martyred in an earlier uprising, has become an iconic hero of the underground resistance.

Gabriel and the other plotters, including black marketeer Jurgis (Colson Baker aka rapper Machine Gun Kelly), are being tracked by high-ranking police official William Mulligan (John Goodman). Though Mulligan appears to be grimly dedicated to thwarting the insurgents, his ultimate allegiance in the struggle is unclear.

Equally obscure is the role being played by a mysterious prostitute of Mulligan’s acquaintance, suitably dubbed Jane Doe (Vera Farmiga). Whether or not she has a heart of gold, Doe does possess a bookshelf full of history tomes and a drawing on the wall of her room depicting the Trojan Horse.

“Captive State” engages more interest as the interlocking elements of the planned attack emerge. Catholic viewers, though, may have mixed feelings on finding that a character called Eddie the Priest (Guy Van Swearingen) is among those preparing it.

Identified in the dialogue as, in fact, an “ex-priest,” Eddie sells chalices to advance the cause. He also advises fellow conspirator Anita (Caitlin Ewald) to take off the cross she wears around her neck, implying, perhaps, that the extraterrestrials are anti-religious or specifically anti-Christian. There’s no follow-up to this momentary detail, however.

The invaders are busy exploiting the world’s natural resources, and they and their human collaborators spy on everyone, including Gabriel and his live-in girlfriend, Rula (Madeline Brewer), as they cavort in bed. Additionally, hi-tech gadgets have been banned. Exactly what application to real life these aspects of the situation are meant to have the script fails to specify.

The film contains considerable violence with some gore, torture, multiple suicides, glimpses of nonmarital sexual activity, cohabitation, a prostitution theme, a transvestite character, at least one profanity, a couple of rough terms and occasional crude language. The Catholic News Service classification is A-III — adults. The Motion Picture Association of America rating is PG-13 — parents strongly cautioned. Some material may be inappropriate for children under 13.

NEXT: ‘Us’ is a frightening look in the mirror at ‘them’