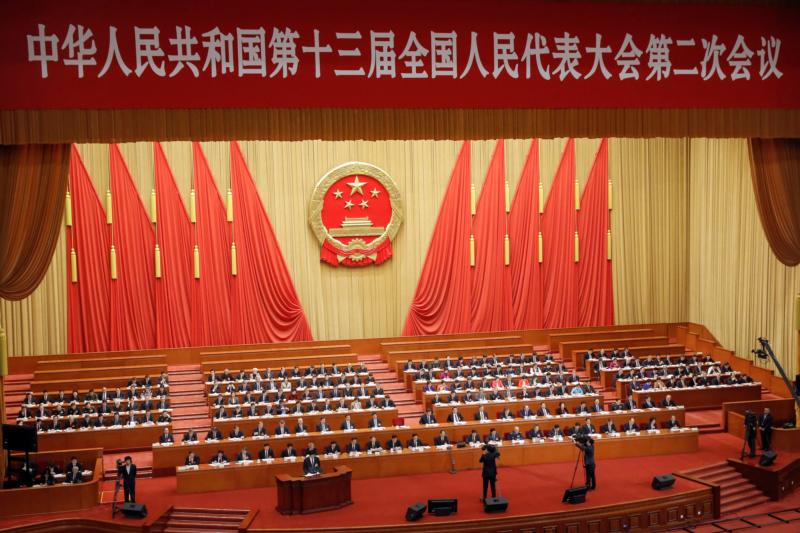 Officials in Beijing attend the second plenary session of the National People’s Congress at the Great Hall of the People March 8, 2019. (CNS photo/Thomas Peter, Reuters)

SYDNEY (CNS) — Chinese Premier Li Keqiang has reiterated the Communist Party’s commitment to make religion more culturally Chinese, underscoring what many see are problems with the secret agreement on the appointment of bishops, signed in September between the Vatican and Beijing.

“We must fully implement the (Communist) Party’s fundamental policy on religious affairs and uphold the Sinicization of religion in China,” Li, the ruling Communist Party’s No. 2 leader, said while delivering his annual “work report” March 5.

His message was delivered at China’s National People’s Congress in Beijing, part of the annual “two sessions” that started March 3 and were expected to run for up to 10 days. The congress is widely seen as the effective rubber stamp parliament in the one-party state.

Bishop Vincent Zhan Silu of Mindong, a member of the consultative conference and vice chairman of the Chinese Catholic Patriotic Association, told Hong Kong’s Sing Tao Daily March 3 that the deal was a win-win agreement that would promote the unity of the Chinese Church and its healthy development, ucanews.com reported.

“There will be no official or unofficial church when the church is united,” he said.

Asked if it meant the so-called underground church would be forced to disappear, he said: “Don’t you want the church to be united? A church schism is not the fundamental aspiration of Catholics.”

Bishop Zhan said those Catholics who refused to join the official church were acting in their personal interests, but there was no timetable for the integration of the underground church — those who have refused to register with the government — with Beijing’s hierarchy.

“Everyone works hard and works together,” he said.

The push to “Sinicize religion” — make it more culturally Chinese — was introduced by President Xi Jinping in 2015 and written into party orthodoxy in 2017. Experts see it as an attempt by the officially atheist Communist Party to bring religions under its absolute control.

In 2018, the party-controlled, governing bodies for Protestants, Catholics and Muslims in China all released detailed five-year plans on how to Sinicize their religions.

Catholics and Protestants have plans to retranslate the Bible, rewriting annotations to it. They also plan to integrate “Chinese elements” into services, liturgies, sacred music, clerical clothing and church buildings.

Beijing’s plan has seen Catholic and Protestant churches come under fire despite the agreement with the Vatican. In addition, under the Sinicization plan, up to 2 million ethic Uighur Muslims have been placed in so-called “re-education” camps in the province of Xinjiang, according to human rights groups.

The meetings in Beijing began while Cardinal Fernando Filoni, prefect of the Congregation for the Evangelization of Peoples, traveled to Taiwan, Hong Kong and Macau Feb. 26-March 6. He said the agreement needed improvement.

“The agreement is provisional only, and we will improve it in the future,” Cardinal Filoni said after celebrating Mass in Hong Kong March 5.

Beijing has moved slowly on recognizing about 30 “underground” bishops named by the Holy See but not recognized by the Communist Party Catholic organizations. So far, only one one such bishop has been “recognized” by Beijing.