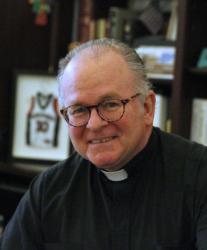 Jesuit Father Patrick J. Conroy, the chaplain for the U.S. House of Representatives, is pictured in a May 8, 2017, photo. (CNS photo/Rhina Guidos)

WASHINGTON (CNS) — In a unanimous ruling April 19, a three-judge panel of the U.S. Court of Appeals for the District of Columbia Circuit upheld the long-standing requirement of the House of Representatives that it open each day it is in session with a prayer.

“Since 1789, the House of Representatives has begun each legislative day with a prayer,” said the court’s opinion, which was filed by Tatel.

Although a House-appointed chaplain has traditionally delivered the opening prayer, some time ago the House began allowing members to nominate other individuals to give a prayer as “guest chaplain.”

As the opinion explained, this current case arose when a House member asked Father Conroy to invite Daniel Barker, a former Christian minister who is now an atheist, to be guest chaplain and deliver a secular invocation. Barker is co-president of the Freedom From Religion Foundation, a nonprofit that promotes nonbelief and “works to keep state and church separate.”

The priest denied the request and Barker sued in 2016, claiming that he was being “unconstitutionally excluded” from the guest chaplain program because he is an atheist. Barker cited the Establishment Clause of the First Amendment — which says Congress “shall make no law respecting an establishment of religion, or prohibiting the free exercise thereof.”

A lower court dismissed Barker’s claim and he appealed to the D.C. Circuit.

The House’s Office of the Chaplain approves guest chaplains and coordinates their visits. A majority of guest chaplains over the years have been Christian, but Muslim, Jewish and Hindu chaplains have been welcomed. “The House has never had an openly atheist or agnostic guest chaplain” the court ruling noted.

When Barker and the Freedom From Religion Foundation requested that he be allowed to be a guest chaplain, he was told of three requirements all guest chaplains must meet: They must be sponsored by a House member, they must be ordained, and they must not directly address House members and “instead address a ‘higher power.'”

When he was turned down, Barker sued, alleging it was a violation of the Establishment Clause and labeling it discrimination “against those whose religious beliefs do not include a belief in a supernatural higher power (and) those who practice a religion that does not have ordinations.”

“Even though we accept as true Barker’s allegation that (Father) Conroy rejected him ‘because he is an atheist’ … the House’s requirement that prayers must be religious nonetheless precludes Barker from doing the very thing he asks us to order (Father) Conroy to allow him to do: deliver a secular prayer,” the judges said in their decision.

The court cannot order the chaplain to allow Barker to deliver a secular invocation “because the House permissibly limits the opening prayer to religious prayer,” they wrote.

NEXT: Chaput: Testing of Christianity today not a defeat but a new awakening