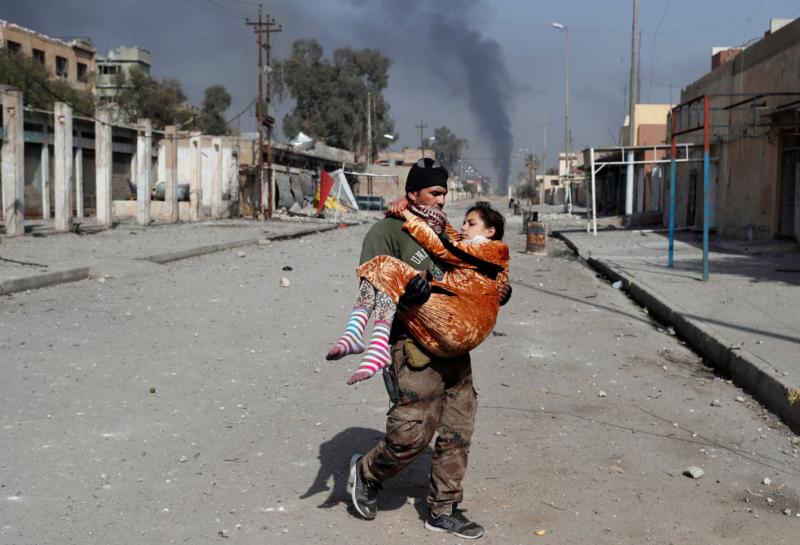 An Iraqi soldier carries an injured woman during a battle with the Islamic State group in Mosul Feb. 28, 2017. (CNS photo/Goran Tomasevic, Reuters)

NEW YORK (CNS) — In an April 12 op-ed in The Wall Street Journal, the CEO of the Knights of Columbus said that “Christian towns in Iraq increasingly look neither Christian nor Iraqi — but Iranian.”

“The public identifies the threat against Christians in Iraq and Syria as emanating from Islamic State,” wrote Carl Anderson. “After a hard-fought war, ISIS is no longer a territorial power. But the religious minorities persecuted under the caliphate remain in peril, thanks to the Iraqi government’s tolerance of Iranian influence.”

He said the threat to Iraq’s Christians now is coming from Iran-backed militias that are keeping minority groups from returning home or fleeing once again.

Before he visited Iraq in March, Anderson said, he met with Pope Francis. “A Middle East without Christians is not the Middle East,” the pope told him.

“Baghdad’s ambassador in Washington often says that ‘Iraq is not Iraq without its minorities,'” Anderson wrote.

He noted that five years ago, the Islamic State “swept through Northern Iraq, killing and displacing hundreds of thousands of Christians, Yezidis and other religious minorities.”

Both the Obama and Trump administrations each declared the IS actions genocide, he said, “The proof lay not only in the dead but in the collapse of communities that had survived for millennia. There were as many as 1.5 million Iraqi Christians before 2003. Today some 200,000 remain.”

The IS onslaught across Iraq “was intense but burned out quickly,” he said. “The group swiftly took control of the ancient Christian homeland of Ninevah in 2014 but was forced out within three years. With their towns liberated, displaced Christians hoped to return, rebuild and work for a better future. ”

The Knights of Columbus stepped in, committing $25 million to help with the rebuilding of homes and other structures as well as assist in the return of those who had fled the area. In August 2017, many Iraqi Christians were coming back.

The international fraternal organization also has led a national effort to prioritize funding for the reconstruction and resettlement of Karamdes, a devastated Christian town in Northern Iraq, which was liberated from IS in late 2016.

Anderson pointed out that the Trump administration “also promised to prioritize the needs of these minorities after previous aid programs had overlooked them.”

“Water and power facilities, schools, hospitals and other public works have been refurbished and rebuilt, courtesy of the U.S. government,” he said.

But during his visit to Iraq in March, Anderson said, he “learned of new threats that could undermine these projects and keep Christians from returning home.”

As IS was dismantled, “a different menace took its place,” he said. “Iranian-backed militias known as the Hashd al-Shaabi, or Popular Mobilization Forces, quickly took root in the devastated, previously Christian towns.”

While Baghdad “claims power over the Ninevah region,” he said, “the reality is “the militias control much of it.”

“They have made life nearly unbearable for Christians attempting to return to towns like Batnaya, where the Popular Mobilization Forces have stripped Christian family homes of plumbing, wiring and other metal,” he explained.

Locals, church leaders, and American and Kurdish government officials “warn that the Iranian-backed groups have extorted Christian families and seized their property,” said Anderson. “Credible reports of violent crimes have emerged. Iranian proxies now are conducting a program of colonization in the Iraqi sector — building homes and centers for the use of Iraq’s Shiite majority in historically Christian towns.”

He described the two goals he said Iran has in Iraq: It wants to build a “‘land bridge’ to Syria through Iraq,” he said. “Second, it aims to alter fundamentally the demography of Ninevah in favor of Tehran. The Christians are at best collateral damage.”

So once again many of fleeing the country because they fear for their lives, because of the militias and no “rule of law in their hometowns,” according to Anderson.

He said that the genocide IS carried out “is now being facilitated and even actively continued by Iran’s proxies with the tacit support of the Iraqi government.”

“The situation is beyond demoralizing for anyone who has stood by Iraq’s minorities and prayed for their triumph after years of adversity,” Anderson added.

He praised the fact that much aid has been directed to the Ninevah region, “but it will be undermined unless the country’s overall security situation improves.”

He support must continue for “these fragile communities” Ninevah as well as in Kurdistan and in Southern Iraq.

Anderson noted that Vice President Mike Pence and other U.S. government officials have urged Iraq “to remove these irregular militias and take control of the region. Prime Minister Adil Abdul-Mahdi has proved unwilling to comply so far.”

Like the U.S. government, those who have advocated for and supported displaced communities are not happy with Iraq’s “dalliance with Iranian proxies.”

“Washington’s designation of Iran’s Islamic Revolutionary Guard Corps as a foreign terrorist organization should encourage Baghdad to rethink its embrace of Iran-backed militias,” Anderson concluded. “If Iraq wants Iraq to remain Iraq, it should get serious about protecting minorities before it is too late.”

NEXT: Notre Dame to Notre Dame: University to donate to cathedral restoration