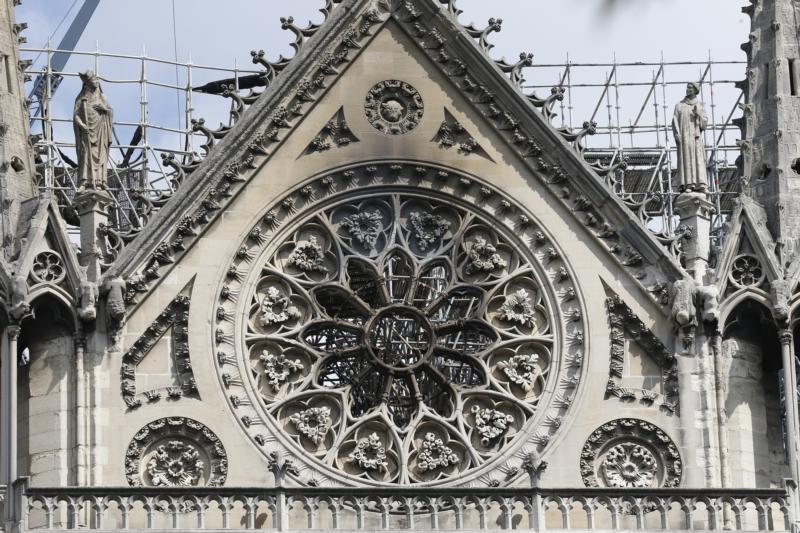 One of the rosette windows of Notre Dame Cathedral is seen April 17, 2019, two days after a fire destroyed much of the church’s wooden structure. Church and government officials pledged to rebuild the historic cathedral, which dates to the 13th century. (CNS photo/Paul Haring)

SOUTH BEND, Ind. (CNS) — Holy Cross Father John I. Jenkins, president of the University of Notre Dame, has directed the university to donate $100,000 toward the renovation of the Notre Dame Cathedral in Paris.

“We are deeply saddened to see the damage to … a church whose exquisite Gothic architecture has for centuries raised hearts and minds to God,” the priest said in an April 16 statement.

Up to 500 firefighters battled for 15 hours to save the cathedral after flames erupted in the structure’s attic. The blaze quickly consumed two-thirds of the 13th-century oak roof and brought down the cathedral’s 300-foot spire. Authorities said much of the cathedral’s wooden interior was destroyed and its masonry was seriously scorched.

“We join in prayer with the faithful of the cathedral and all of France as they begin the work of rebuilding,” Father Jenkins said.

He quoted the university’s founder, Holy Cross Father Edward Sorin, a French immigrant, who spoke to how the university would go forward after a fire destroyed the campus in 1879: “Tomorrow we will begin again and build it bigger, and when it is built, we will put a gold dome on top with a golden statue of the Mother of God so that everyone who comes this way will know to whom we owe whatever great future this place has.”

At 6 p.m. local time April 16, the bells of the Basilica of the Sacred Heart on the Notre Dame campus tolled 50 times — representing the 50 Hail Marys of Our Lady’s rosary — to mark the start of the rebuilding process for the cathedral.

Other U.S. churches similarly tolled their bells, including St. Patrick’s Cathedral in New York City, the Basilica of the National Shrine of the Immaculate Conception in Washington, and Holy Name Cathedral in Chicago.

In Washington April 16, President Donald Trump offered condolences to President Emmanuel Macron as France faces the enormous task of rebuilding Notre Dame Cathedral. The U.S. also has offered “assistance in the rehabilitation of this irreplaceable symbol of Western civilization,” according to a statement issued by White House press secretary Sarah Huckabee.

“The United States stands with French citizens, the city of Paris, and the millions of visitors from around the world who have sought solace in that iconic structure,” she said.

Trump tweeted early in the afternoon of April 17 that he had called Pope Francis to offer “condolences from the People of the United States for the horrible and destructive fire at Notre Dame Cathedral.”

The tweet repeated Trump’s earlier offer to provide “our great experts on renovation and construction as I did in my conversation yesterday with President @EmmanuelMacron of France. I also wished both Pope Francis and President Macron a very Happy Easter!”

Alessandro Gisotti, interim director of the Vatican press office, confirmed the conversation in his own tweet, writing, “The Holy Father received a telephone call this afternoon from the President of the United States, Donald Trump, who, regarding the devastation of Notre-Dame Cathedral, expressed to the Pope his closeness, in the name of the American people.”

In the U.S., those who want to donate to the restoration effort can contribute through the French Heritage Society, a U.S. 501(c)3 charitable organization. FHS is the main American heritage organization in France and the U.S., and has given close to $2 million in restoration and education grants in the last two years. Donations made be made online at https://frenchheritagesociety.org/event/notre-dame-fire-restoration-fund.

In Paris, authorities said the cause of the cathedral fire was not certain, but that it could be linked to renovation work that the cathedral was undergoing.