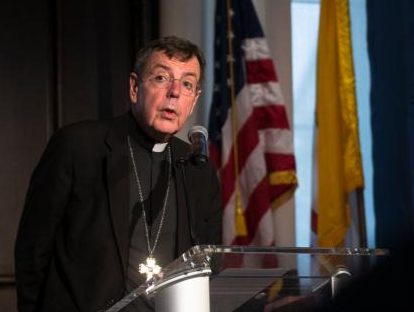 WASHINGTON (CNS) — In introductory remarks during a conference examining the laity’s role in helping the church move forward from the clergy abuse crisis, a speaker pointed out that what has happened impacts, and continues to affect, the whole church.

“We can’t fix the church by our own efforts,” but Catholics, like Simon of Cyrene who helped Jesus carry the cross, “can carry some of the weight,” said Stephen White, executive director of The Catholic Project, a group sponsored by The Catholic University of America in response to the church abuse crisis.

The group, which organized the April 25 conference at Catholic University, looks at root causes of abuse and ways for the church to move forward with conferences and consultation with theologians, sociologists, canonists, social workers and historians.

Detroit Archbishop Allen H. Vigneron started the day’s discussion by stressing the importance of lay leaders working with bishops in response to the crisis.

“My leadership in this crisis would not be possible without cooperation of the laity,” he said, stressing that “consultation is of indispensable value” and that bishops must determine responses that are authentic vehicles for moving on and finding healing.

In his own experience, he has listened to victim survivors and lay groups, which he said have animated his own response.

He also formed a group of clergy members, laity, archdiocesan leaders, communicators and experts in civil and canon law that has simply been dubbed: “the group.”

“We know what we mean when we say the group needs to get together,” he said, stressing that this body of people can identify where the local church stands and what actions need to be taken.

Other speakers at the conference included lay leaders and a victim-survivor advocate.

The day ended with criticism of recent comments made by the Pennsylvania attorney general about the abuse crisis.

The attorney general had initiated a months-long investigation into how six of Pennsylvania’s Catholic dioceses handled abuse claims over a 70-year period, beginning in 1947. Last August, a grand jury released its report on that investigation, which linked more than 300 priests and other church workers to abuse claims during the period investigated and said alleged victims numbered over 1,000.

Since the report was made public, many commentators have taken issue with some of its conclusions, including veteran journalist Peter Steinfels, who wrote an in-depth critique of the report in Commonweal in January.

The Pennsylvania grand jury said the dioceses acted “in virtual lockstep” to cover up abuse allegations and dismiss alleged victims over seven decades, a conclusion Steinfels called “inaccurate,” “unfair” and “misleading.” “Nor are there comparisons to other institutions. One naturally wonders what a 70-to-80-year scrutiny of sex abuse in public schools or juvenile penal facilities would find,” he added.

In his remarks at Catholic University, Weigel quoted Shapiro’s April 25 op-ed in The Washington Post, which said: “Where is the sense of urgency and acceptance of responsibility to support the victims and survivors of sexual abuse at the hands of Catholic clergy?”

“Well, it’s everywhere,” Weigel said, adding: “It’s there in the bishops who have spent hundreds of hours (with victims of abuse), it’s there in the $4 billion in settlements that the Catholic Church in the United States has provided — far too disproportionate amount of which has gone to predatory tort lawyers.”

“This kind of distortion of the Catholic reality by self-seeking politicians in cooperation with the biased media has to be called for what it is,” he said. “That is no reason for us not to take our mess seriously and fix it, but it is to say that we are dealing here with a societal plague.”

Weigel said he would like to propose that the U.S. bishops establish a lay body of legal experts to review attorney general reports of clergy abuse allegations as they come out.

He also said it is necessary for lay Catholics to develop “a healthy skepticism of the mass media and its reporting of these issues.”

“This is a moment of purification,” Weigel acknowledged. “Painful, but essential.”

Contributing to this story was Kurt Jensen.

PREVIOUS: Chaput: Testing of Christianity today not a defeat but a new awakening

NEXT: Magistrate denies motion to dismiss charges against plowshares activists