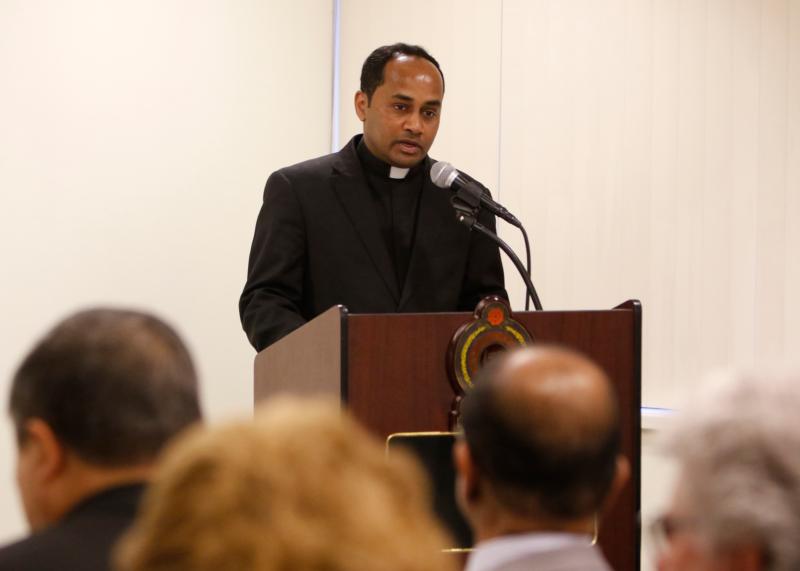 Father Nalaka Silva, chaplain of Sri Lankan Catholics of New York and New Jersey, speaks during an interfaith memorial service April 24, 2019, at Sri Lanka’s Permanent Mission to the United Nations in New York City. The mission hosted the event to remember the victims and all people affected by the Easter terrorist attacks in Sri Lanka. (CNS photo/Gregory A. Shemitz)

NEW YORK (CNS) — All Sri Lankans “are going through one of the saddest and most devastating periods of our history,” Father Nalaka Silva told those gathered at an evening interfaith memorial service April 24 in New York for the victims and all people affected by the Easter terrorist attacks.

“I myself am struggling with mixed feelings of anger, fear, pain, sadness and many other feelings I cannot express,” said the priest, who is chaplain of Sri Lankan Catholics of New York and New Jersey.

The priest said he has celebrated Masses in both Catholic churches bombed by terrorists April 21 and noted that he and other Sri Lankans who live outside their homeland “have that intimate connection with our people, therefore the wounds in our hearts hurt so much.”

Officials reported April 26 that the death toll was approximately 253; the number was revised downward from the earlier number of more than 350 deaths. They attributed the discrepancy to “complex forensic results.” The injured numbered about 500.

The violence was the deadliest Sri Lanka had seen since a 26-year civil war ended in 2009. The government has confirmed that nine suicide bombers, including one woman, were involved and said it had arrested 40 people.

Father Silva was one of several speakers at the New York interfaith service, hosted by Sri Lanka’s Permanent Mission to the United Nations.

An overflow crowd of more than 150 people attended, including ambassadors, representatives of diplomatic missions, U.N. officials and members of New York area’s Sri Lankan community. The service, which lasted about an hour, was held in the mission’s large meeting room.

Many attendees shared expressions of sympathy by writing personal entries in the mission’s book of condolence, which was opened April 23. That day was designated by the Sri Lankan government as a national day of mourning. To date over 200 people have signed the book at the mission.

“These people were innocent,” Father Silva said. “Some people went to church to celebrate the most sacred day of their faith. They wanted to pray and offer their innocent desires to God. There were some others who went to have a relax time in our beautiful country. These innocent people had to suffer and sacrifice their lives because of the evil created by evil people.”

The priest said he has spoken to many of his friends in Sri Lanka. “They are still in disbelief. … Their hearts are so heavy. A fear has all of a sudden surrounded their lives. Terrorism and acts of violence always put innocent lives in danger.”

So, “it is our responsibility as people of love and goodwill to be the keepers of our own brothers. We have to desire the well-being of all. We need to be vigilant all the time to prevent these acts,” he continued, urging everyone to not run from “our own responsibility for promoting peace and protecting our brethren.”

Catholics believe “life is sacred” because “life is created by God, redeemed by Jesus Christ and sanctified by the Holy Spirit,” Father Silva said, so “in this difficult time, we turn to God of life and love and pray for peace.”

He thanked the world leaders who have “extended their support to our country.”

“Sri Lanka is a beautiful country where all people live in harmony. These acts can never destroy our unity and harm the brotherhood we share with one another. Let us be united as one to enhance peace and harmony in the world,” Father Silva said.

After his remarks, the priest asked those at the service to stand and pray silently along with Sanmuganathian as she read aloud Pope Francis’ Prayer for Peace. The pope delivered the prayer June 8, 2014, at the Vatican when he presided over an “invocation for peace” with Israeli President Shimon Peres and Palestinian President Mahmoud Abbas.

“Keep alive within us the flame of hope, so that with patience and perseverance we may opt for dialogue and reconciliation,” the prayer says in part. “In this way may peace triumph at last.”

In his remarks, Archbishop Auza expressed his “heartfelt closeness to the Christian community (of Sri Lanka), wounded as it was gathered in prayer, and to all the victims of such cruel violence.”

“We are dealing here with the heinous crime of terrorism as a concrete manifestation of extremists and fundamentalism and radicalism, which we constantly denounce in the United Nations debates,” he said.

The archbishop recalled the words of sympathy the pope has extended to Sri Lanka and his condemnation of terrorism, adding that he made the pope’s words his own in addressing the diplomats and staff at the Sri Lankan mission and all Sri Lankans at the service.

Gregory A. Shemitz contributed to this story.

NEXT: Conscientious objection is part of religious freedom, commission says