Young love shines in ‘The Sun Is Also a Star’ 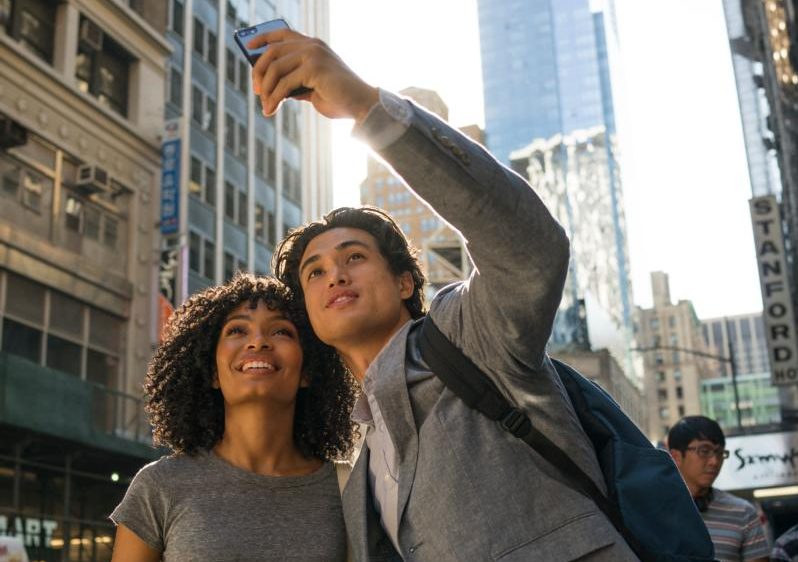 Yara Shahidi and Charles Melton star in a scene from the movie “The Sun Is Also a Star.” (CNS photo/Warner/Bros.)

NEW YORK (CNS) — The easily identifiable purpose of the adolescent romance “The Sun Is Also a Star” (Warner Bros.) is to make teenage girls swoon by presenting them with the beau ideal of a beau.

Parents will have to assess, however, whether director Ry Russo-Young’s uneven but essentially innocent adaptation of Nicola Yoon’s best-selling novel for young adults is suitable for its target audience — or their male counterparts.

The model boyfriend in question is Korean American high school senior and true believer in romance Daniel Bae (Charles Melton). After he crosses paths with pragmatic would-be astronomer Natasha Kingsley (Yara Shahidi) in New York’s Grand Central Terminal, he insists that they were destined to be together, but she has her doubts. In fact, she questions the very existence of love.

Natasha also is preoccupied with her struggle to prevent her family from being deported back to their native Jamaica. Since their unwilling departure is looming, Daniel has only 24 hours to make Natasha fall for him, an accomplishment he gamely sets out to achieve.

Though less drastic than Natasha’s, Daniel has a problem of his own. His prosperity-obsessed parents are forcing him to apply to Dartmouth College as a premed student, whereas he aspires to be a poet.

By the time Daniel, who has previously courted Natasha over coffee at a Greenwich Village cafe, finds a private karaoke chamber in which to launch into a steamy rendition of Tommy James and the Shondells’ 1968 hit “Crimson and Clover,” it’s clear that resistance is futile. And, indeed, the song is followed by some intense necking.

Another stop on Daniel’s itinerary is Roosevelt Island where the pair watch the sunset and later fall asleep in each other’s arms. The fact that they do so in an open field, and awaken fully clothed and otherwise unruffled, however, suggests that the apropos anthem for this sequence would be the Everly Brothers’ “Wake Up, Little Susie,” rather than the Rolling Stones’ “Let’s Spend the Night Together.”

So long as Russo-Young keeps the focus on the central duo, Daniel’s quirky chutzpah as he seeks to win over his lady love is sufficiently appealing to maintain viewer interest. The pretentious pronouncements about life, the universe and everything that lard Tracy Oliver’s script, by contrast, will likely try moviegoers’ patience.

The film contains scenes of sensuality, a couple of mild oaths, at least one rough term and several crude and crass expressions. The Catholic News Service classification is A-III — adults. The Motion Picture Association of America rating is PG-13 — parents strongly cautioned. Some material may be inappropriate for children under 13.