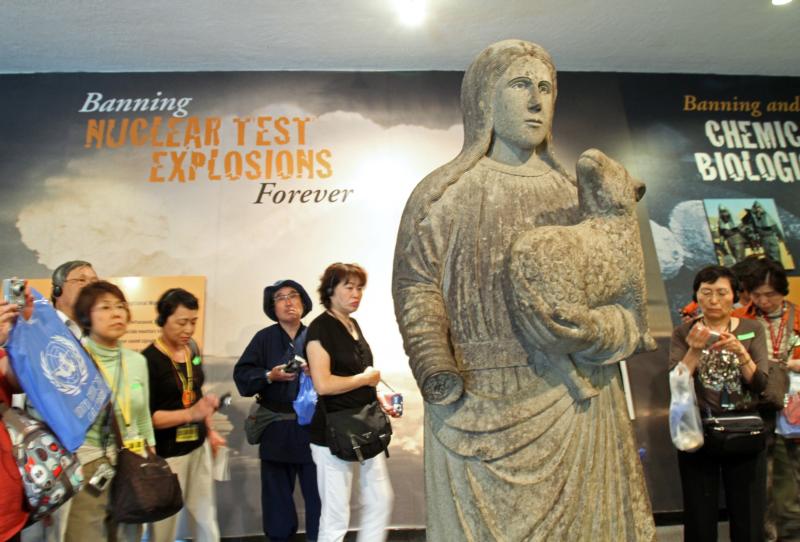 Japanese tourists at the United Nations in New York May 4, 2010, look at a statue of St. Agnes found in the destroyed Urakami Cathedral after the U.S. dropped an atomic bomb on Nagasaki, Japan, near the end of World War II. Fifteen college students attended a conference in Washington May 20-24 designed to prepare a new generation of nuclear weapons specialists and activists. (CNS photo/Gregory A. Shemitz)

WASHINGTON (CNS) — At the start of his senior year at The Catholic University of America last fall, Tim Jones never thought he’d be joining a crash course on nuclear weapons policy within days of his May 18 graduation.

What Jones, 22, said he learned was more eye-opening than he imagined. And that was only after two days.

His greatest concerns: making sure that nuclear weapons are never used and that others, especially people of his generation, better understand the grave threat to human life and dignity posed by such weapons of mass destruction.

“I felt this conference could give me the tools that maybe in the future I can rally some people on campus since we are located just down the Metro from the Capitol, and to lobby and become a force against nuclear weapons,” said Jones, whose degree is in political science. He will begin graduate studies in business analysis at the university in the fall.

Jones, of Wayne, New Jersey, was one of 15 college students who participated in the weeklong program designed to develop the next generation of Catholic nuclear nonproliferation specialists and activists.

It was coordinated by the Kroc Institute for International Peace Studies at the University of Notre Dame in cooperation with the Catholic Peacebuilding Network and Georgetown University’s Berkley Center for Religion, Peace and World Affairs. Notre Dame’s Keogh School of Global Affairs Washington office hosted the students May 20-24.

Gerard F. Powers, director of Catholic peacebuilding studies at the Kroc institute, earlier told Catholic News Service that the need for young Catholics in particular to engage in the nuclear disarmament debate is as crucial as it has been in more than three decades. He said lay Catholic voices have played a key role in the past and that it’s time for his generation to prepare new voices to enter policymaking and activist roles.

The program touched on numerous topics and gave students the opportunity to hear from some of the foremost U.S. Catholic actors who work on peacebuilding and nuclear nonproliferation policy.

Several attendees admitted that nuclear weapons were not an oft-discussed topic on their campuses. They said student concerns focused on paying off student loans, climate change, gender issues, racism, gun violence and, in some cases, abortion.

Krystyna Kula, 19, of Smithfield, Rhode Island, who is studying mathematics at the University of Notre Dame, admitted to not knowing much about nuclear weapons but wanted to participate in the program to learn more.

“I didn’t grow up with the Cold War,” she said.

When classes resume in the fall, she hopes to share what she learned about the history of weapons development and citizen-initiated efforts to shrink nuclear stockpiles.

The decreasing emphasis on arms control in recent years was a concern of attendee Lauren Appel, 21, a political science major at Randolph College in Lynchburg, Virginia, who studied the 1962 Cuban missile crisis and the Cold War during a recent study tour in Cuba.

“Learning about the tensions of the Cold War drew my attention to nuclear weapons and how it was a really big deal and yet today the issue still continues,” Appel said. “I would like to have a new knowledge of nuclear weapons on the world scale that still exist today. I would like to learn more about how to negotiate for peace and promote peace across all nations and resolve the issues that exist today.”

Two attendees from South Korea said they wanted to return to Seoul, where they are graduate students at Ewha Womans University, and take what they learned to campus as well as to the Archdiocese of Seoul.

“For me it’s been an eye-opening experience. In some ways, I could even say mind-blowing,” said Agatha Kim, 30. “In scale and scope, I didn’t know the history of nuclear weapons programs.”

She said that although there has been some coverage of North Korea’s efforts to develop nuclear weapons in South Korean media, wider coverage on nuclear nonproliferation is largely ignored.

“The way things are happening is not getting to the people. We have big trouble with fake news, wrong information,” she said.

“Everything related to the North Korea issue is pretty much polarized or politicized,” Minjeong Ko, 27, agreed. “Even the nuclear issue, with most of the people, is not really raised in detail. Everything (from North Korea) is raised as being communist propaganda.”

“I’m excited to bring back some more details and additional context so we can talk about it,” Ko said.

Kim is active in youth ministry in the Archdiocese of Seoul and plans to share what she learned with other young people. She also is helping translate into Korean the U.S. bishop’s 1983 pastoral letter, “The Challenge of Peace: God’s Promise and Our Response” so it can be widely shared in parishes.

Several students said they were inspired to act to reduce the world’s nuclear weapons stockpiles after hearing from experts, college faculty and those involved in developing policy, some of whom have been involved in nuclear nonproliferation and peacebuilding for decades. They pledged to carry on the tradition of Catholic peacemaking as much as possible.

“They were against these 30-plus years ago,” Jones, the CUA grad, said of the presenters. “They’re still against them today.”

NEXT: Survey of women in Bible study shows they have less stress, more patience