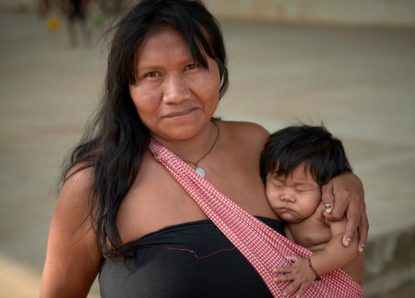 A Warao indigenous mother and child pose April 2, 2019, in Boa Vista, Brazil. They are among refugees from Venezuela who are living in a park that they and other Warao refugee families settled in; they receive support from local Catholics. (CNS photo/Paul Jeffrey)

BOA VISTA, Brazil (CNS) — Bending over a hammock, Sister Ines Arciniegas cradles a week-old infant, rocking the baby as she inquires about the mother’s health. Reaching into a bag, she pulls out clothing for the newborn and for another baby nursing at his mother’s breast.

The late-afternoon sun casts a golden glow over the cluster of families, all Warao indigenous people. Smoke rises from fires where women are heating water to prepare their evening meal as children chase a ball nearby.

The scene would seem typical of a Warao village, except for some glaring details — near each fire is a gym bag or small suitcase stuffed with the family’s meager belongings. And instead of hanging from tree branches, the hammocks are suspended from the concrete roof of a sports complex.

These families sought refuge in Brazil nearly a year-and-a-half ago, after flooding destroyed crops in their villages near the mouth of the Orinoco River in northern Venezuela.

That country’s severe political and economic crisis made it impossible for them to remain at home, said Baudilio Centeno, 37, a Warao man from the community of Arawao.

“We came because of the (lack of) food, medicine and jobs,” he says. “We were in need. It was very sad.”

Of the thousands of people who have been leaving Venezuela daily in search of better living conditions in neighboring countries, indigenous people face some of the greatest hardships, church workers say. And government policies for migrants do not always take into account their particular circumstances.

Warao people have traditionally crossed back and forth across the border between Venezuela and Brazil, said Esther Tello, co-director of Caritas, the Catholic Church’s social and humanitarian assistance office in Boa Vista. The spiraling crisis in Venezuela has increased migration.

There are now at least 3,000 Warao migrants in at the cities of Boa Vista, Manaus, Santarem and Belem, according to church workers. A new study by the International Organization for Migration urges the Brazilian government to pay particular attention to the needs of indigenous migrants.

The experience of Centeno and other residents of the sports complex underscores the challenges. They originally were housed in a government-run tent camp established just for Warao people, but they eventually moved out. First they went to an open, grassy area, then to the complex, which provides more protection from the elements.

Lodging in the tent camp was too cramped, some said, and the families were under the authority of military officers instead of their traditional leaders.

But the Warao are not the only indigenous group to have migrated in large numbers.

Near Pacaraima, on the Brazilian side of the border with Venezuela, several communities have taken in Pemon people who fled Venezuela after a confrontation with security forces in which at least three indigenous people died, said Ernesto Pulido, 41.

Pulido was among more than 800 Pemon who fled to two villages of Taurepang people, relatives of the Pemon, in the Brazilian state of Roraima.

Indigenous communities in the Gran Sabana of southern Venezuela, where the Pemon live, are divided over government plans to promote large-scale mining operations. Pulido and many of his neighbors worked in tourism, which has dwindled to nearly nothing because of the political upheaval in the country, he said.

That created economic hardship for them even before the Feb. 22 standoff with soldiers, which occurred as the Venezuelan government closed the border to prevent vehicles carrying supplies from crossing into the country. Venezuelan President Nicolas Maduro said the aid caravans constituted outside interference.

Pulido was among a group of men arrested after the confrontation in his home community. Once released, he took refuge in Brazil with his wife and three children.

“We left our homes, our businesses — everything,” he told Catholic News Service. “We have to start all over again.”

Several hundred Pemon migrants have returned to Venezuela, part of a pattern of movement by indigenous people in border zones throughout the Amazon, where European colonists drew national boundaries that split traditional territories.

But six weeks after they had arrived, others were building wooden house frames or settling into spare structures, evidently preparing for a longer stay.

Among them was Pulido, who saw little future in his homeland.

“I’m not thinking of going back,” he said.

NEXT: Pope draws lessons from Mother Teresa in city of her birth