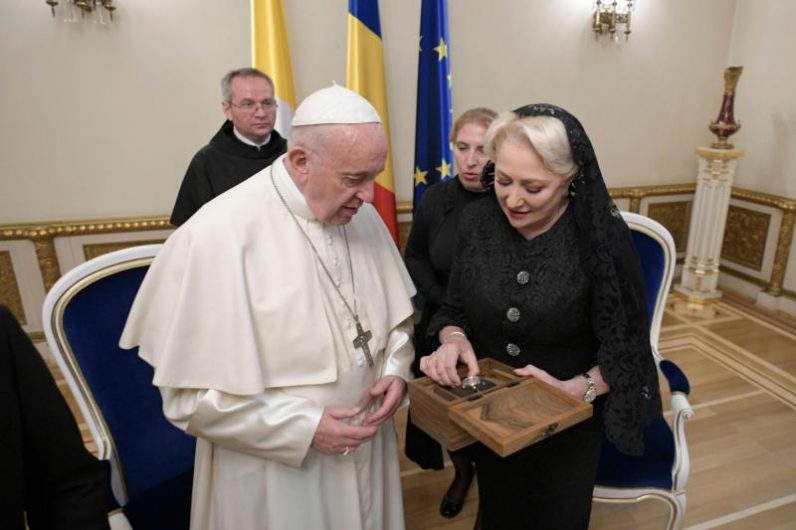 Pope Francis meets with Prime Minister Viorica Dancila of Romania in the Cotroceni Palace in Bucharest, Romania, May 31 as the two exchanged gifts. The pope is making a three-day visit to Romania. (CNS photo/Paul Haring)

BUCHAREST, Romania (CNS) — Pope Francis told Romanian leaders a country’s success is measured by how it treats and cares for its most vulnerable citizens, especially the poor and disadvantaged.

The path to building an inclusive society is one where every person is seen as a brother or sister and “where the weak, the poor and the least are no longer seen as undesirables that keep the ‘machine’ from functioning,” the pope told civil authorities and diplomats May 31, the first day of his visit to Romania.

“Only to the extent that a society is concerned for its most disadvantaged members, can it be considered truly civil,” he said.

The pope had been welcomed at Henri Coanda International Airport in Otopeni, 10 miles north of the center of Bucharest, by President Klaus Iohannis and his wife, Carmen Iohannis, as well as the country’s bishops.

Hundreds of well-wishers cheered and waved flags bearing the blue, yellow and red colors of Romania as well as the yellow and white colors of Vatican City State.

Thousands more lined the streets of Bucharest to welcome the papal motorcade as Pope Francis made his way to Cotroceni Palace, the presidential palace, where he met privately with President Iohannis.

Signing the palace guestbook, the pope wrote: “May God bless the Romanian people and may they walk united in peace and prosperity under the maternal gaze of the Virgin Mary.”

The pope was then greeted by Romanian Prime Minister Viorica Dancila before making his speech to the country’s civil authorities and members of the diplomatic corps.

Thirty years after the fall of communist control of the country, the pope reflected on the path toward democracy “from a regime that oppressed civil and religious liberty, isolated the nation from other European countries and led to the stagnation of its economy and the exhaustion of its creative powers.”

Nevertheless, the pope said, Romania still faces challenges, especially “the several million people who have had to leave their homes and country in order to seek new opportunities for employment and a dignified existence.”

“I pay homage to the sacrifices endured by so many sons and daughters of Romania who, by their culture, their distinctive identity and their industriousness, have enriched those countries to which they have emigrated and by the fruit of their hard work have helped their families who have remained at home,” he said.

Emphasizing the need for “heart and soul” to confront the challenges, Pope Francis said that the Christian churches can help promote political and social actions that places human dignity and the common good above all.

The Catholic Church, he said, hopes to “contribute to the building up of a society and of civil and spiritual life in your beautiful land of Romania.”

NEXT: Catholics, Orthodox must unite against ‘culture of hate,’ pope says