Pope draws lessons from Mother Teresa in city of her birth 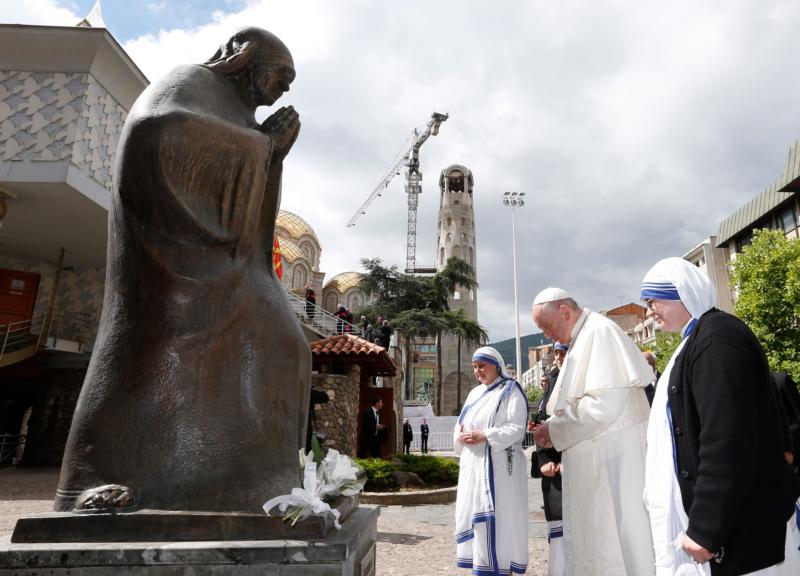 Pope Francis and Missionaries of Charity nuns pray in front of a statue of Mother Teresa at the Mother Teresa Memorial during a meeting with religious leaders and the poor in Skopje, North Macedonia, May 7, 2019. (CNS photo/Paul Haring)

Mother Teresa was born Agnes Ganxhe Bojaxhiu to Albanian parents in Skopje Aug. 26, 1910, so after paying the obligatory formal visit to North Macedonia’s president, Pope Francis went May 7 to the memorial and museum built on the site of the church where she was baptized. The church was later destroyed in an earthquake.

“Moved by the love of God,” the pope told the president, Mother Teresa “made love of neighbor the supreme law of her life.”

At the memorial, Pope Francis did not speak about the saintly founder of the Missionaries of Charity, but after praying silently before her relics, he praised God for the gift of her life and prayed for her intercession for North Macedonia.

Pope Francis also prayed that God would give Christians the grace “to become signs of love and hope in our own day when so many are poor, abandoned, marginalized and migrants.”

Among the guests present at the memorial were dozens of Missionaries of Charity, about 100 of the people they serve in Skopje, and two of Mother Teresa’s cousins, the Vatican said.

Celebrating Mass in the nearby Macedonia Square on a brisk spring morning, Pope Francis drew people’s attention to human hungers — the hunger for bread, but also the hunger for truth, for God and for love.

Too many people, he said, “have become accustomed to eating the stale bread of disinformation,” and so they end up being prisoners of a worldview that makes them either indifferent to others or downright hostile.

Christians must never be afraid to tell God that they are hungry “for an experience of fraternity in which indifference, disparagement and contempt will not fill our tables or take pride of place in our homes,” he said. “We are hungry, Lord, for encounters where your word can raise hope, awaken tenderness and sensitize the heart by opening paths of transformation and conversion.”

Hunger for connection, for peaceful relations and for a better world are the stuff of young people’s dreams, Pope Francis said at an afternoon meeting with Christian, Muslim and Jewish young people.

“What adventure requires more courage than the dream … of giving hope to a weary world?” the pope asked the young people gathered at the pastoral center of Sacred Heart Cathedral.

“Our world is weary and divided, and we can be tempted to keep it divided and to become divided ourselves,” he said. But young people must keep dreaming to “keep alive our certainty that another world is indeed possible and that we are called to get involved, to help build that world through our work, our efforts and our actions.”

Think of Mother Teresa, the pope told the young people. She could not have imagined what her life would become, but “she kept dreaming and tried to see the face of Jesus, her great love, in all those people on the sides of the road” in Kolkata. “She dreamed in a big way, and this is why she also loved in a big way.”

Mother Teresa liked to call herself “a pencil in the hands of God,” he said, and when she gave God control of her life, he “began to write new and amazing pages of history with that pencil.”

“Each of you is called, like Mother Teresa, to work with your hands, to take life seriously and make something beautiful of it,” the pope told them.

Father Goce Kostov, an Eastern-rite priest, and his wife, Gabriela Kostova, addressed the pope at his last event in North Macedonia, an early evening meeting with priests and their families and with members of religious orders.

Kostova told him that as the wife of priest, “I share with him all his joys and concerns.” With four boys, ages 1-15, and with a daughter who died in infancy, the family has experienced how family prayer brings strength, she said.

“As a priest,” Father Kostov said, “God has given me the grace to be able to experience physical paternity in my family and, at the same time, spiritual paternity in my parish. The two are complementary and complete each other. When the tenderness, love, patience and compassion for my family, especially the children, is reflected in the parish, it bears fruit.”

Pope Francis thanked the priests, their families and the religious of both the Latin- and Eastern-rite Catholic communities for helping him experience the fullness of Catholic identity.

According to Vatican statistics, there are only about 15,000 Catholics in the country, which is less than 1 percent of the population, but the pope told the priests and religious if they become obsessed with numbers, they will start thinking everything is up to them.

Instead, he pointed again to Mother Teresa, a “concrete sign of how one small person, anointed by the Lord,” could spread the perfume of the Gospel far and wide.

“History is written by people like this, people unafraid to offer their lives for love,” the pope said.