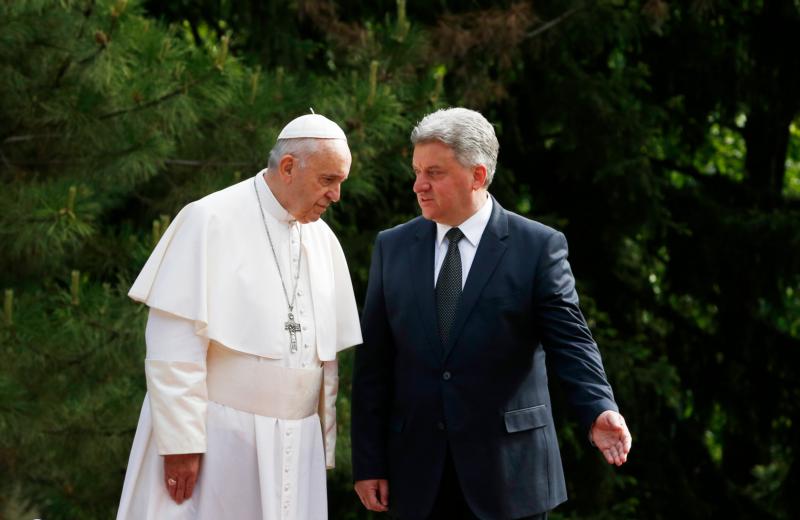 Pope Francis is pictured with President Gjorge Ivanov of North Macedonia during a welcoming ceremony in the courtyard of the Presidential Palace in Skopje, North Macedonia, May 7, 2019. (CNS photo/Paul Haring)

SKOPJE, North Macedonia (CNS) — Arriving in Skopje, with its skyline dotted by minarets and domes, Pope Francis told civic leaders that the country’s ethnic and religious diversity is a “precious patrimony” to be appreciated and treasured.

Gjorge Ivanov, ending his term as president, told the pope May 7, “You come at a time when the Macedonian society is deeply divided, and the Macedonian country is heavily wounded by broken promises, unfulfilled expectations and faltering trust in the international community.”

NATO and the European Union, supporting the position of Greece, delayed talks to allow the former Yugoslav republic to join until after it agreed in February to change its name to North Macedonia.

As the delay dragged on, Ivanov said, many people believed “the cross and crescent, the church and the mosque are being misused as borders and fortresses to mark and defend some kind of imaginary territories. It seems we forget that we are all people, regardless of our belief.”

North Macedonians chose Stevo Pendarovski as their next president May 5; Pendarovski, a pro-Western candidate, is expected to guide the nation into NATO in 2020 and into the European Union.

Speaking in the Mosaic Hall of the presidential palace, Pope Francis said the country’s Orthodox, Catholic and Protestant Christians, its Muslims and its Jews and its people with Macedonian, Albanian, Serbian and Croatian heritage “have created a mosaic in which every piece is essential for the uniqueness and beauty of the whole.”

“Every effort made to enable the diverse religious expressions and the different ethnic groups to find a common ground of understanding and respect for the dignity of every human person, and consequently the guarantee of fundamental freedoms, will surely prove fruitful,” the pope said.

Pope Francis also used his 10-hour visit to North Macedonia as an opportunity to thank the nation’s people for welcoming and assisting migrants and refugees, especially those who left Syria and Iraq in 2015 and 2016, crossing into Macedonia after the more common Mediterranean route to Western Europe became more difficult to navigate.

According to statistics from the Council of Europe, at the end of 2017 there were 123,000 migrants in North Macedonia, the equivalent of 6.3 percent of the population.

“With you, they found a secure haven,” the pope said. “The ready solidarity offered to those in such great need — people who had left behind so many of their dear ones, to say nothing of their homes, their work and their homeland — does you honor.”

“It says something about the soul of this people” that, despite widespread poverty and unemployment, the people of North Macedonia offered their solidarity and concrete assistance, the pope said.

“It is my hope that you will cherish the chain of solidarity that emerged from that emergency,” he said, “and thus support all volunteer efforts to meet the many different forms of hardship and need.”

PREVIOUS: Pope draws lessons from Mother Teresa in city of her birth

NEXT: Jean Vanier, who changed lives of intellectually disabled, dies in Paris