Pope Francis called Jean Vanier to thank him before his death 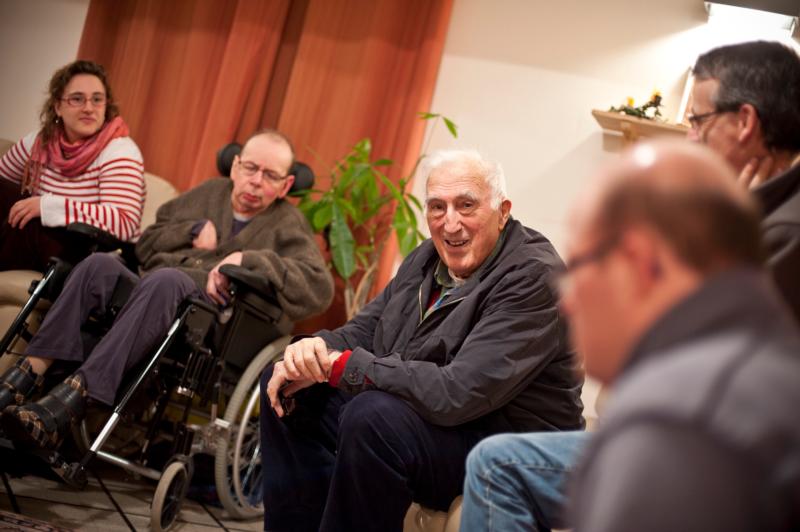 Jean Vanier, founder of the L’Arche communities, is pictured in a March 3, 2011, photo. Vanier, a Canadian Catholic figure whose charity work helped improve conditions for the developmentally disabled in multiple countries over the past half century, died May 7 at age 90. (CNS photo/courtesy Jean Vanier Association)

ABOARD THE PAPAL FLIGHT FROM NORTH MACEDONIA (CNS) — Pope Francis told reporters May 7 he had been kept informed about Jean Vanier’s failing health and had phoned him a week before his death.

“He listened to me, but he could barely speak. I wanted to express my gratitude for his witness,” Pope Francis said May 7, the day Vanier died in Paris.

“He was a man who was able to read the Christian call in the mystery of death, of the cross, of illness, the mystery of those who are despised and discarded,” the pope said.

But, also, Pope Francis said, Vanier stood up for those “who risk being condemned to death even before being born.”

“Simply put, I want to thank him and thank God for having given us this man with such a great witness,” the pope said.

The death of Vanier, whose ministry helped improve the lives of developmentally disabled people in dozens of countries, drew prayers and words of condolence from church leaders around the world.

Vanier, who died of thyroid cancer early May 7 at the age of 90, founded L’Arche in 1964, allowing people with developmental disabilities and those who assist them to share their lives while living in community in an atmosphere of compassion.

In Paris, Archbishop Michel Aupetit said he had recently visited Vanier in Jeanne Garnier hospital in the French capital.

“He was bright and joyful, all abandoned in the hands of God, like a child who will return to the Father’s house,” Archbishop Aupetit said in a statement from the Paris Archdiocese. “His life was consecrated to testify of the beauty of every man in this world and first of the most wounded. I share the sorrow and the hope of his relatives, and I fondly bless all the members of the Ark and Faith and Light.”

The president of the French bishops’ conference also paid tribute to Vanier, saying he “has been touched by human fragility.”

Bishop Georges Pontier of Marseille credited Vanier for developing L’Arche communities, which “radiate … a joy, a friendship and a human depth that we need so much. These are places of hope.”

“Let us entrust to the mercy and tenderness of God the one who has just left and pray also for all the members of the communities of the Ark, as well as the faith and light communities marked by this death,” the bishop added in his statement.

Toronto Cardinal Thomas Collins said Vanier “taught us to value the dignity of every individual.”

“In a world that increasingly pushes us to gauge success and worth by what we own or who we know, he reminded us that authentic love, friendship and community are what we really need,” the cardinal said.

“May his example of peace and gentle care live on through those he inspired for years to come,” he added in a statement. “We give thanks to God for his life.”

Supreme Knight Carl Anderson said Vanier “lived a life dedicated to the simple but inviolable belief that each of us is created in God’s image and that every single life is sacred and deserving of respect, protection and, most of all, love.”

Anderson presented Vanier with the Gaudium et Spes Award, the highest honor of the Knights of Columbus, in 2005, just hours after the death of St. John Paul II.

Anderson described Vanier as a friend and philosopher who was also a man of action.

“We must now continue his mission. We must rededicate our lives to the service and protection of others. We must love as Jean loved,” he said.

Bishops from England and Wales, meeting in Spain for a “study week,” heard of Vanier’s death “with deep emotion,” said Cardinal Vincent Nichols of Westminster, president of the Bishops’ Conference of England and Wales.

“For over half a century, he has inspired an entirely new appreciation of the gift of people with learning disabilities and revealed the most profound heart of human community,” Cardinal Nichols said in a statement. “We pray for him and his beloved L’Arche communities at this moment of loss. May he rest in peace.”

Halfway around the world, Archbishop Mark Coleridge of Brisbane, Australia, president of the Australian bishops’ conference, tweeted that “Going down to the bedrock of human dignity, #JeanVanier rose above all the ideological dogfights … the world feels a bit smaller, colder and darker without him. RIP… as he surely will.”

Hundreds of other tributes were tweeted from people who had met Vanier, participated in one of the communities emerging from L’Arche or Faith and Light or joined the retreats he led.

L’Arche (“the ark” in French) stresses the dignity and value of human life. L’Arche communities, numbering more than 100, exist in at least 37 countries.

Vanier also co-founded Faith and Light, an international organization of small groups that support and celebrate people with developmental disabilities and their families.

“His community of Trosly, the communities of L’Arche, Faith and Light, many other movements, and countless thousands of people have cherished his words and benefited from his vision,” Posner said in a statement.

NEXT: Pope says study on women deacons was inconclusive