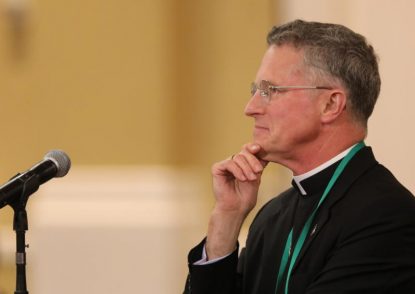 Archbishop Timothy P. Broglio of the U.S. Archdiocese for the Military Services speaks from the floor during the spring general assembly of the U.S. Conference of Catholic Bishops in Baltimore June 11, 2019. (CNS photo/Bob Roller)

WASHINGTON (CNS) — Amid rising tensions between the United States and Iran, Archbishop Timothy P. Broglio of the U.S. Archdiocese for the Military Services called on President Donald Trump’s administration to seek “sustained dialogue … to de-escalate the current situation that is a danger to both the region and the world.”

The archbishop’s call for diplomacy rather than military action came in a June 18 letter to Secretary of State Mike Pompeo. His letter was made public June 19.

The correspondence from the chairman of the U.S. bishops’ Committee for International Justice and Peace outlines the Catholic Church’s long-held stance that has preferred dialogue and engagement as the best actions to resolve political stalemates.

Archbishop Broglio called on the U.S. to avoid a military confrontation.

“There is little probability that another war in the most volatile region in the world, where the recent and current experiences of conflict in Syria, Iraq and Yemen are vivid, will succeed in bringing peace to the region,” Archbishop Broglio wrote.

“A different approach is needed,” he added. “The president’s recent statement that the United States does not seek war with Iran is encouraging.”

Tensions between the U.S. and Iran have heightened since early May as several seagoing oil tankers have been the subject of sabotage and attacks. In the most recent incidents June 13, two tankers were targeted with land mines in the Gulf of Oman. One of the tankers was set ablaze.

Pompeo told reporters June 18 after a meeting with U.S. military leaders at U.S. Central Command in Florida that Trump “does not want war.” However, he said, the U.S. presence in the region was meant as a deterrent to Iran’s threats.

Iran has denied any involvement with the ships and has said it will defend its interests.

Pope Francis June 16 called for diplomacy to head off any confrontation.

“I invite everyone to use the instruments of diplomacy to resolve the complex problems of the conflicts in the Middle East,” he said after celebrating Mass in Camerino, Italy, which was devastated by an earthquake in 2016. “I renew a heartfelt appeal to the international community to make every possible effort to favor dialogue and peace.”

Threats of military action by both countries will do little to resolve the disagreement, two observers of Middle East events told Catholic News Service.

They said Iran’s economy has taken a deep hit because of new sanctions put in place since the unilateral U.S. withdrawal from a multilateral agreement that limits the ability of Iran to develop nuclear weapons.

Trump has said since that the withdrawal from the so-called P5+1 pact has made the world a safer place.

Despite the U.S. withdrawal, France, the United Kingdom, Russia and China plus Germany remain parties to the deal, which international monitoring agencies have confirmed that Iran continues to follow. However, Iran announced June 17 that it could soon start enriching uranium to just beneath weapons-grade level.

In response, the Pentagon ordered 1,000 more troops to the Middle East. The step is seen as an effort to deter Iran and ease concerns among allies about the security of vital shipping lanes.

George Lopez, retired professor of peace studies at the Kroc Institute for Peace Studies at the University of Notre Dame, said he doubted that threatening statements from Trump and other administration officials and boosting the military presence in the Middle East will bring Iran to the negotiating table “or get them to heel.”

“The Iranians don’t look at it that way. They look at it as intimidation or a cavalier announcement,” Lopez said. “The Iranian framework is that they have been under attack economically since last year.”

He expressed concern that the Trump administration has failed to undertake any diplomatic overtures to Iran since withdrawing from the nuclear accord negotiated in 2015.

Should the U.S. initiate a surgical strike on one of Iran’s nuclear facilities to block uranium enrichment — as some in the administration and in Congress have suggested — Lopez predicted Iranian leaders would see it “as an act of war.”

“We didn’t see the towers when they were attacked on 9/11 as a surgical strike. We saw it as an act of war. Why wouldn’t any other state do that as such?” he said.

Kelsey Davenport, director for nonproliferation policy at the Arms Control Association and an occasional collaborator with the U.S. Conference of Catholic Bishops’ Department of International Justice and Peace, said Iran’s announcement on uranium enrichment is not surprising given the toll that U.S.-imposed sanctions have taken on the country.

“Slightly exceeding the (uranium) stockpile limit is not a near-term proliferation risk. But once Iran conducts the first violation it becomes easier to breach the deal in more serious ways,” she told CNS.

Of more immediate concern, according to Davenport, is the potential for a U.S. attack on an Iranian nuclear facility. “The most likely outcome is Iran deciding to pursue nuclear weapons,” she said. “Tehran may decide that developing a nuclear deterrent outweighs the cost that they’ll pay in sanctions and diplomatic isolation.”

Despite Trump’s rhetoric, Davenport said she does not believe he wants to see a war erupt with Iran.

She called on the remaining parties to the nuclear deal to “deliver on sanctions relief,” as Iran has sought since the U.S. withdrawal.

“So there is a space (to maintain peace), but it requires more courage from Europe to step and risk international sanctions and to send a strong message to Iran that it’s not just Iran that is willing to take some risks to preserve the deal,” Davenport explained.

“The deal is not dead yet, and conflict with Iran is not inevitable yet. But Europe in particular has to be much more proactive in the coming weeks to signal that they’ll risk U.S. penalties to deliver on sanctions relief.”

NEXT: Bishop Blaire dies; recalled for living by a simple code — ‘to serve’