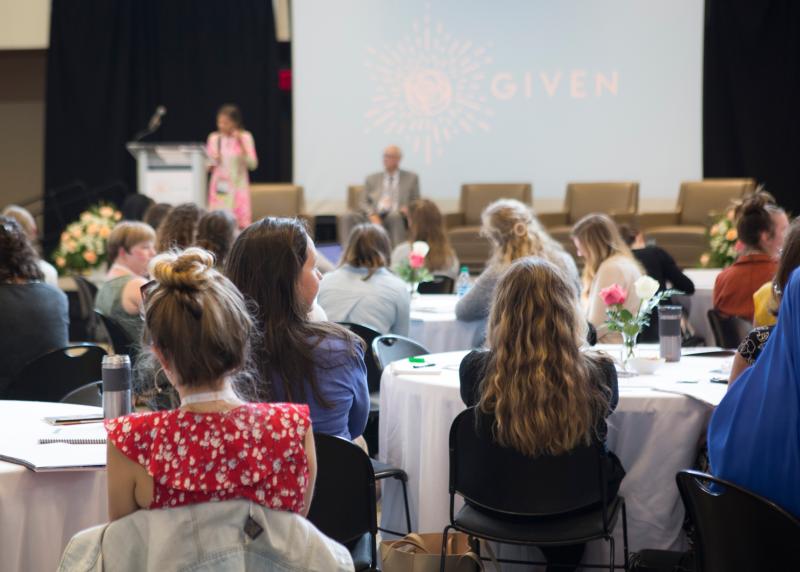 Attendees listen to Laraine Bennett, communications manager for the National Council of Catholic Women, during a June 13, 2019, GIVEN session at The Catholic University of America in Washington. The annual GIVEN Catholic Young Women’s Leadership Forum, held June 12-16 this year, is designed to help young adult Catholic women with a heart for mission and an aptitude for leadership identify their particular gifts and find practical pathways to put them in the service of the Gospel. (CNS photo/Sydney Clark)

WASHINGTON (CNS) — Spiritual advice was mixed with practical suggestions at the GIVEN Catholic Young Women’s Leadership Forum held at The Catholic University of America in Washington.

“To prepare yourself for motherhood, consider getting rid of your television and your smartphone,” said Jeanne Schindler, an author, lecturer and former college professor at the forum’s June 14 session. She said that not only does it end distractions, but it also supports the notion of a home “as a place of order and wonder.”

Elizabeth Kirk, director of the Institute of Faith and Culture at the University of Kansas, found herself in full agreement. “We got rid of our TV on Oct. 27, and my husband and I consider it the best decision we ever made,” she told 120 attendees, most of whom were laywomen between the ages of 21 and 30.

GIVEN is a year-round initiative that began in 2016 with the goal of helping young women embrace what St. John Paul II called the “feminine genius.”

Among its objectives are leadership training, faith formation, and the support of mentors to help young women better understand and pursue their particular mission and/or vocation. It was originated by the Council of Major Superiors of Women Religious. The nonprofit GIVEN Institute was founded last September. The forum is held annually; this year’s event was June 12-16.

Schindler said her marriage has brought her a new maturity: “We are for each other, forever, and we know that.”

Courage, she found, “does not always roar. Sometimes it’s the small voice that says, ‘I will try again tomorrow.'”

Motherhood, she added, “is an indescribable privilege. You are a sanctuary. You protect and nourish a person.” Her home life, she said, “is rich. It’s full of celebration, perhaps too much.”

Kirk, who has adopted four children with her husband, also spoke about the burdens of overcoming infertility. “If our crosses, whatever they may be, are not obstacles to our gifts, our obstacles can bear fruit.”

She acknowledged that infertility is “kind of a fundamental anguish marking your worth as a woman,” but medical fertility treatments “treat the child as an object, not the result of a marital embrace.”

Kirk said adoption “reminds us that all love is sacrificial.”

Keynote speaker Gloria Purvis, a co-host of the “Morning Glory” radio program on the Eternal Word Television Network, told attendees that it took many years and a series of unfulfilling corporate jobs after graduating from college for her to find time to reflect on her gifts.

She discovered that “I had a tendency to protect people who are vulnerable.” That came, she realized, from her mother, who, on the first day of kindergarten saw a single mother bringing her daughter, and told Gloria: “See that little girl? I want you to look after her.”

“And I just acted on it without fear,” Purvis added. “This thread of sort of sticking up for the underdog, even at great harm to myself.”

“Don’t let it be about ego,” she cautioned. “It has to be about integrity and honesty, and being true to what’s inside yourself.”

“I would say that your best bet is not to look a secular media to figure out your goals as a woman,” Purvis concluded. “Do not look to the world. Rather, embrace what God has given you as a woman.”