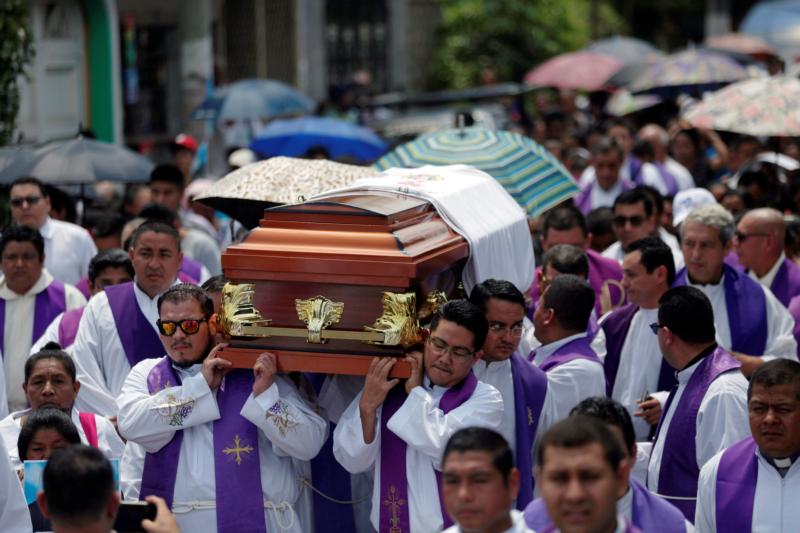 Priests carry the casket of Father Cecilio Perez Cruz during his funeral procession in Sonzacate, El Salvador, May 20, 2019. Parishioners found Father Perez dead in his residence in Juayua early May 18 with a note nearby that said he had not paid “rent,” a euphemism for extortion money. (CNS photo/Jose Cabezas, Reuters)

WASHINGTON (CNS) — A 34-year-old sacristan is in the custody of Salvadoran authorities in connection with the May killing of a Salvadoran priest.

Abraham Heriberto Mestizo made an initial court appearance June 14 after being formally accused by officials in Sonsonate of being involved in the killing of 35-year-old Father Cecilio Perez Cruz, found fatally shot May 18 at home.

In a press release, El Salvador’s National Civil Police said Mestizo was the sacristan at San Jose La Majada parish in Juayua, in the western part of El Salvador, where the priest was the pastor, but the statement did not explain why he was linked to the crime.

In a short video clip disseminated by various online news sites on June 14, Mestizo appears before cameras saying: “Let justice be done, whoever did these things.” Outside the place where he was being held, a crowd of parishioners from San Jose de La Majada prayed in the street and said the sacristan was innocent, Salvadoran news agencies reported. Police said he had been captured June 10 but did not face formal charges until four days later.

Shortly after the murder of Father Perez, Catholic Church officials demanded that justice be carried out since the killing of another priest in 2018 remains unsolved. From the archbishop of San Salvador to human rights groups connected to the Catholic Church, all called for an investigation of the crime.

NEXT: Bishop to remain with Hong Kong protesters ‘no matter how long they stay’