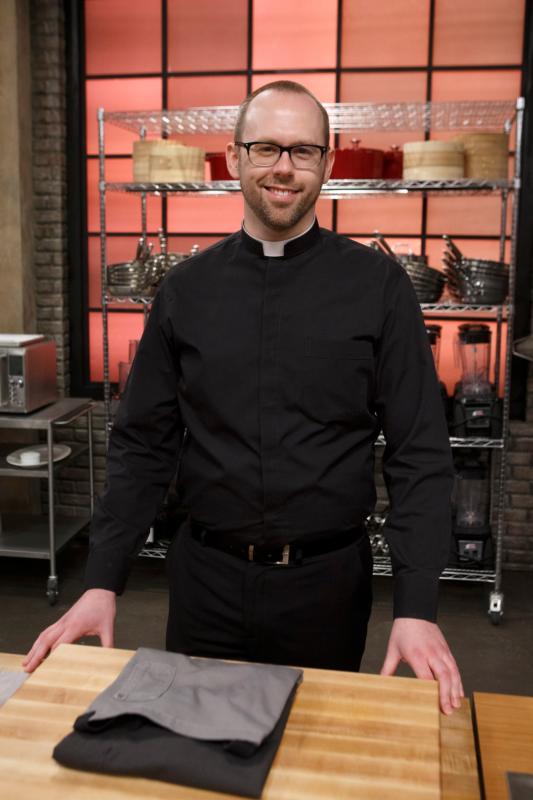 Father Adam Young poses in an episode of “Worst Cooks in America” Season 17 on the Food Network. The pastor of St. Paul Church in Cranston, R.I., will soon be a featured contestant on the reality TV show’s upcoming season set to premiere Aug. 4, 2019. (CNS photo/courtesy The Food Network)

PROVIDENCE, R.I. (CNS) — Father Adam Young can think of a few failed recipes in the kitchen that might lead him to think he’d be a good contestant on the popular Food Network show “Worst Cooks in America.”

The pastor of St. Paul Church in Cranston will soon be a featured contestant on this upcoming season, which is set to premiere Aug. 4. Each season, 14 “recruits” with extremely poor cooking skills take part in a culinary boot camp led by celebrity chefs Bobby Flay and Anne Burrell, to earn a cash prize of $25,000.

Earlier this year, Father Young was watching the reality show with friends and they all agreed he would fit right in on the small screen. So, they looked up how to apply and the very next day, Father Young received a response that they would love to feature him on the show.

“I had to send a video application to show them my skills — or lack thereof. It was some awful chicken dish that I found in a cookbook. I had to carve up a chicken and it just didn’t come out so good. I’m pretty sure that secured my spot,” he said, laughing.

His bio on the show describes Father Young as “needing all the prayers he can get” in this competition, continuing on to say: “He has been a priest for nine years, but God seems to abandon him in the kitchen.”

Some people find fixing up a meal in the kitchen to be a relaxing, therapeutic experience, but not Father Young. But on the show, he had an opportunity to learn cooking techniques, including knife skills, checking temperature, seasoning and preparation.

“It always stressed me out, even though I managed to make an edible dish. It was just easier to order takeout. Now I can find a little more fun in it and not worry if I mess up. I have found myself cooking more and experimenting a bit. The other priest that lives in the rectory has been my guinea pig and he’s still doing OK.”

Father Young admitted he was a little star-struck at first to learn to cook from some of America’s best during the taping of the episodes of the show.

“I was so lucky while I was one the show to have culinary lessons from these world chefs. Their passion for food is very inspiring and it was a humbling experience to work with two world-renowned chefs,” he told Rhode Island Catholic, newspaper of the Diocese of Providence.

This season’s contestants are all ages and come from different walks of life, Father Young shared, adding that the only thing they had in common was that they were all “disasters in the kitchen.”

Father Young shared that learning the basics of cooking on national television may be a unique opportunity to share the faith in a down-to-earth way.

“The church needs good PR. When some people think of the Catholic Church, in the last few months and recently it’s an automatically negative idea, and we deserve it. But there are so many good priests, religious and laypeople out there. It was good that this could be a positive presence,” he said.

Although he couldn’t reveal the final outcome of the show, Father Young said that if he were to win, he was planning on sharing the $25,000 prize with his inner-city parish school of St. Paul.

From the pulpit, he recently explained to his parishioners why he has been missing in action, since during filming he was not able to share his whereabouts with anyone — with the exception of the bishop.

“It’s hysterical. When I left to film, I wasn’t able to tell anyone where I was going. Recently I had to come clean and tell them where I was. When I told them I never heard anyone laugh that hard,” he recounted.

“They are really excited to see their pastor and church on national TV,” he said, adding: “My parishioners know I can’t even make toast, that I’m a pretty hopeless cook.”

Kilgus is assistant editor of Rhode Island Catholic, newspaper of the Diocese of Providence.

NEXT: Digital bill of rights formulated, headed to presidential hopefuls