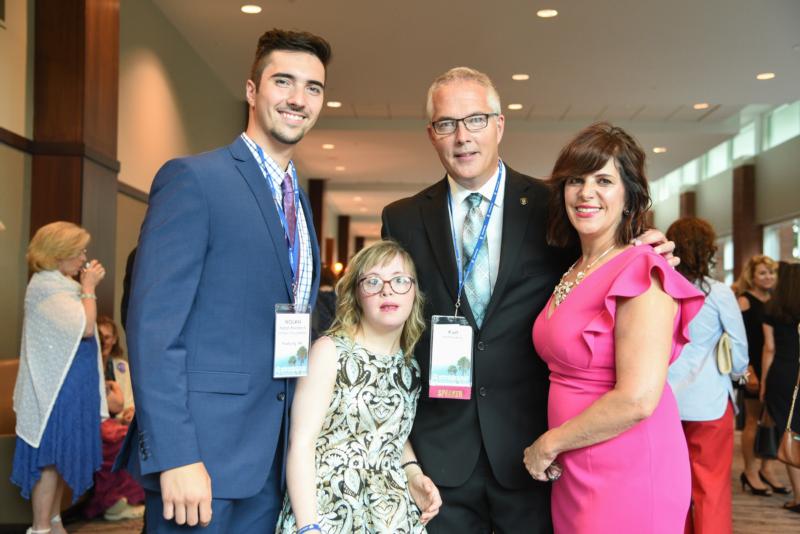 Kurt Kondrich, center, a speaker at the National Right to Life Convention, is pictured with his wife, Margie, and their children, Nolan and Chloe, July 6, 2019. During the closing speeches, convention attendees were moved to tears by the words of Kondrich, whose daughter Chloe, 16, has Down syndrome. (CNS photo/Douglas Deas, The Catholic Miscellany)

CHARLESTON, S.C. (CNS) — While most of the country was winding down from its Independence Day festivities, another type of celebration was underway at the National Right to Life Convention July 5-6 in Charleston.

Pro-life advocates from around the U.S. spent two days celebrating our right to life, an unalienable right first stated in the Declaration of Independence. Participants also focused on learning strategies and best practices to continue defending that right in all its forms.

The latter was the focus of a moving closing ceremony July 6, which included the celebration of Mass by Bishop Robert E. Guglielmone of Charleston.

During the closing speeches, it was the words of Kurt Kondrich, father of Chloe Kondrich, his 16-year-old daughter with Down syndrome, that moved conference attendees to tears.

He spoke about the prenatal test he and his wife never received back in 2003, even though they were approaching 40 and considered “high risk.”

Kondrich explained that back then prenatal tests were quite involved and “rather invasive,” and not something that he and his wife were comfortable undergoing. “Now it is a blood test and it can tell you all sorts of things, but especially if your child has Down syndrome,” he told the audience.

When they had Chloe in the hospital by C-section, he remembered the doctor telling him that his daughter had characteristics of Down syndrome.

“I didn’t know much about it at the time, but I asked if I could hold her,” he said. “The doctor looked at me surprised and said, ‘Oh, you want to hold her?'”

One of the defining moments was when he introduced her to their then 5-year-old son, Nolan. “He was thrilled and so happy,” Kondrich recalled. “That made me realize that she was here for a reason.”

Now, Kondrich said, Down syndrome babies are being identified, targeted and terminated in a form of prenatal genocide due to prenatal testing.

“If your test shows a presence of Down syndrome, it is like you failed the test and it is therefore a death sentence for the child. It is like they are saying, ‘You aren’t going to meet the cultural mandate that we have set for our society so you can’t be born,'” he said.

Kondrich, who is a former police officer, realized after Chloe was born that God had a new path for him: educating the country on Down syndrome and prenatal testing.

“We need to empower people so that they are armed with the knowledge of what to do with the results of their prenatal test, rather than listening to a doctor that tells them just to terminate,” he said.

In July 2014, Pennsylvania passed Chloe’s Law, which requires the Department of Health to provide expectant parents with “up-to-date, evidence-based information about Down syndrome that has been reviewed by medical experts and national Down syndrome organizations.” The information includes treatment options, support services, relevant resource centers, and national and local Down syndrome organizations. Since Chloe’s Law was passed, eight other states have followed suit with similar mandates.

Kondrich calls himself a “dad-vocate” for Down syndrome children and encourages others to join the cause. He thinks about his children and the special relationship they have.

“There are so many kids out there that are missing siblings because of these frightening prenatal tests,” he said. “I know why God put me on this earth and it’s to fight for the lives of children like Chloe.”

Stratford writes for The Catholic Miscellany, newspaper of the Diocese of Charleston.

NEXT: Subduing attacker unusual reaction for deacon but he had to protect abbey