Religious freedom is basis of all other freedoms in U.S., cardinal says 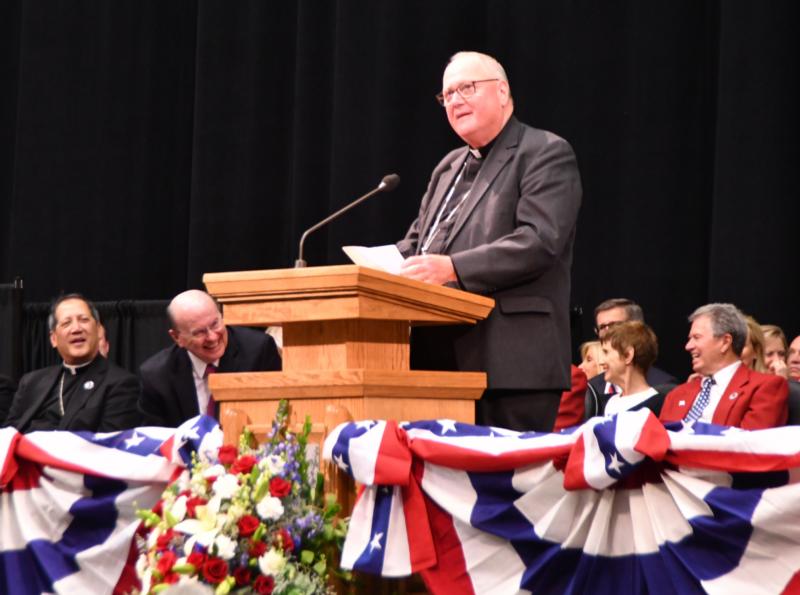 New York Cardinal Timothy M. Dolan addresses a crowd of more than 3,000 gathered June 30, 2019, at the UCCU Events Center on the Utah Valley University campus in Orem. The event was part of the America's Freedom Festival at Provo. (CNS photo/courtesy Intermountain Catholic)

New York Cardinal Timothy M. Dolan addresses a crowd of more than 3,000 gathered June 30, 2019, at the UCCU Events Center on the Utah Valley University campus in Orem. The event was part of the America’s Freedom Festival at Provo. (CNS photo/courtesy Intermountain Catholic)

OREM, Utah (CNS) — The nation’s Bill of Rights guaranteed freedom of religion, not freedom from religion, New York Cardinal Timothy M. Dolan told a crowd of more than 3,000 gathered in Orem for a patriotic event held each year around the Fourth of July.

The defense of religious freedom is the “quintessential American cause, the foundation of all other human rights,” he said, adding that other liberties promised by the Bill of Rights would be in jeopardy if freedom of religion is diluted.

“Simply put, my friends, government has no business interfering in the eternal life, the soul, the conscience or the church,” he said to applause. “Protect our free exercise, and then leave us alone.”

Cardinal Dolan gave the keynote address at the June 30 event, held at the UCCU Events Center on the Utah Valley University campus in Orem. It was part of the America’s Freedom Festival at Provo.

Among those attending were Elder Quentin L. Cook, a member of the Quorum of the Twelve Apostles of the Church of Jesus Christ of Latter-day Saints, and his wife, Mary Cook, and Bishop Oscar A. Solis, head of the Catholic Diocese of Salt Lake City, along with other officials from the two religious denominations.

“In your goodness you call us tonight to recognize our unity in the midst of diversity,” to gather as brothers and sisters regardless of differences of culture and religious affiliations, the bishop said. He prayed that government leaders would extend religious freedom in the United States and throughout the world.

Elder Cook introduced Cardinal Dolan as a good friend who has worked with LDS Church leaders on many issues, including matters of faith and family, and joint humanitarian efforts. The cardinal also has been instrumental in “opening important doors in relationships for our leaders. … He is a bridge builder for all faiths,” Elder Cook said.

Quoting political and religious thought from Alexis de Tocqueville, Thomas Jefferson, Elder D. Todd Christofferson of the LDS Church and the modern philosopher Francis Beckwith, and employing his trademark humor, Cardinal Timothy Dolan of New York roused the crowd to applause and laughter throughout his address.

Cardinal Dolan said to applause that he fears “our first and most cherished liberty” is in danger even though it “has been and is the most driving force for every enlightened, unshackling, noble cause in American history.”

Those causes included the American Revolution. Cardinal Dolan told the story of the Rev. Peter Muhlenberg, an ordained preacher recruited by Gen. George Washington to become the first commander of the 8th Virginia Regiment of the Continental Army.

Cardinal Dolan recounted how the minister removed his clerical robe to reveal his colonel’s uniform, and inspired 162 men from his congregation to enlist in the Continental Army.

“Oh, no wonder, with religion and the churches such essential partners in the revolution, no wonder freedom of religion was enshrined in our national charter,” Cardinal Dolan said.

Similarly, the leaders of the abolitionist movement to end slavery were all motivated by “a conscience moved by faith,” as were those of the women’s equality movement, the civil rights movement and today’s pro-life movement, he said.

Religious freedom is the “quintessential American cause,” the cardinal said, adding that “we citizens of any and all faiths, or of none at all, are not paranoid and self-serving in defending what we hold as ours, but are in fact protecting the country we love. We act not as sectarians but as responsible citizens. We act on behalf of the truth about the human person.”

These days, freedom of religion is threatened by secularists, who believe that religion has no place in the public square, but “our faith just isn’t about showing up on Sunday, it’s about what we do on Monday through Saturday!” Cardinal Dolan said.

Another threat comes from government intrusion into the church’s ministries, message and meaning, he added.

“I’m embarrassed to tell you, but recently a prominent Catholic political leader in Washington stated that, ‘You know, my church needs to get over this conscience thing,'” Cardinal Dolan said. “Well, no, we don’t.”

“As a matter of fact,” he continued, “no, we can’t, neither as believers nor as loyal American citizens. … All we want, along with those first patriots, the abolitionists, the William Jennings Bryants, Cesar Chavez, Dorothy Day, the Rev. Martin Luther King, is the freedom to carry the convictions of a faith-born conscience into our public lives.”

“We want to let freedom ring, and that’s why I’m so thrilled to be with you tonight. God Bless America,” he concluded.

PREVIOUS: Government must account for families separated at border by October