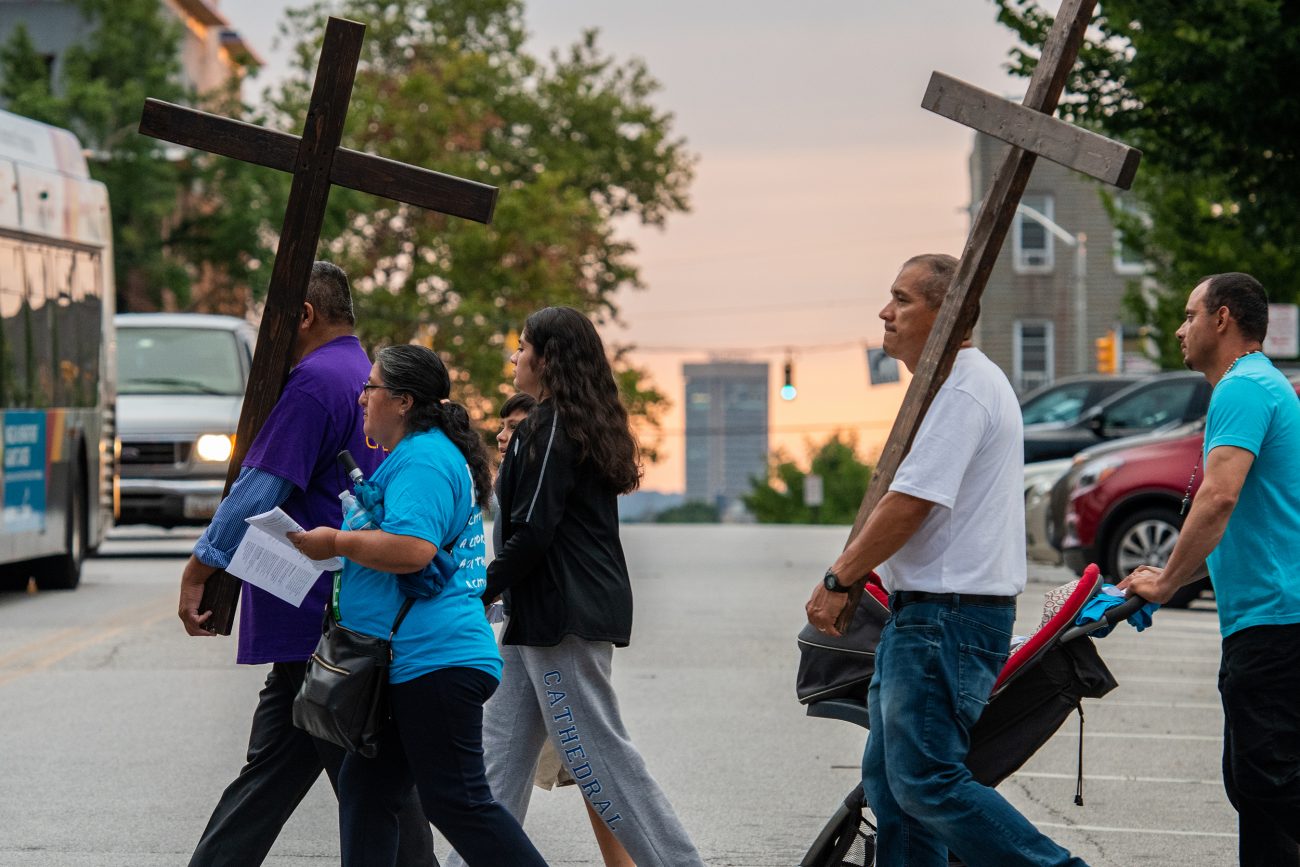 People take part in the refugee-themed Stations of the Cross in Baltimore July 23, 2019. Over 200 people participated in the event, organized in response to the news that U.S. Immigration and Customs Enforcement officers were to begin carrying out deportation orders for some immigrants July 14 in 10 cities nationwide, including Baltimore. (CNS photo/Kevin J. Parks, Catholic Review)

BALTIMORE (CNS) — The Stations of the Cross, modified for the migrant and refugee, began July 23 at Sacred Heart of Jesus-Sagrado Corazon de Jesus in Baltimore’s Highlandtown neighborhood with a not-so-subtle lesson in welcoming the stranger.

“Find someone you don’t know, someone you didn’t come with, and walk with them,” said Redemptorist Father Bruce Lewandowski, pastor of the bilingual parish.

He had prepared 60 copies of “The Way of the Cross: Jesus the Migrant and Refugee,” with prayers, readings and reflections in English and Spanish, which was created by the Ecuadorian Commission for Refugees in Quito in 2003.

With over 200 in attendance, Father Lewandowski acknowledged he had “underestimated” interest in the public display of support for the immigrant community.

“We’ve got a van with a much bigger speaker than this,” he said, of the wheeled unit used. “With a group this big, we could have used that.”

Originally scheduled for July 19 but postponed because of oppressive heat, the event was organized in response to the news that U.S. Immigration and Customs Enforcement officers were to begin carrying out deportation orders for some immigrants July 14 in 10 cities nationwide, including Baltimore. As the Stations commenced, there were no reports of such arrests in Maryland.

For two hours, Father Lewandowski led the people through the streets. The group included children on foot, in arms and strollers, and those who accepted the invitation to carry a not-so-small cross along the way.

They included Fredi Jobel, who belongs to Sacred Heart of Jesus-Sagrado Corazon de Jesus. A truck driver who came to the U.S. from El Salvador in 1990, he holds a green card that grants him permanent residence.

“I’m here to support my people, and the church and community,” Jobel told the Catholic Review, Baltimore’s archdiocesan news outlet.

Those with Salvadoran roots included Lia Salinas, director of Hispanic ministry for the Archdiocese of Baltimore.

“I’m here to show solidarity with our immigrant and refugee brothers and sisters,” said Salinas, who came to the U.S. at age 12. “As Archbishop (William E.) Lori has said, in order to stand with the community, we have to put our faith into action. What better way to pray than on the streets of Baltimore.”

Among those traveling the farthest was Richard Castillo, a member of St. John the Evangelist Parish in Frederick, Maryland, and member of its San Juan Bosco Hispanic Council No. 14726 of the Knights of Columbus.

“I’m a first-generation American,” said Castillo, who joked that he grew up on Long Island speaking “New Yorican,” a mix of English and Spanish. “My father, John, came in 1964, when the U.S. opened its doors to Guatemalans. I’ve had four cousins deported, two in California and two in Texas.”

Castillo works for the Department of Public Works in Frederick but resides in Carroll County, like Father Mark Bialek, pastor of St. John Parish in Westminster, who spent the summer of 2015 in Mexico City, immersing himself in the culture and language.

“When there was talk about the ICE raids in Baltimore, people in Westminster were actually scared of what effect it might have on their families,” he said. “It’s important to show solidarity not only with the Hispanic community, but all immigrants and refugees, to show their dignity in the face of suffering and hardship.”

Father Bialek towered over the crowd as it moved down and across several streets and returned to the parish parking lot.

The 11th Station, Jesus is stripped of his garments, included the following reflection: “Often it is we ourselves who legally strip the migrants and refugees of their dignity by looking down on them, by publicly insulting them, by discriminating against them and humiliating them, because society allows us treat people like that. We have lost sight of the fact that in each migrant and refugee stripped of his rights is to be seen the image of Jesus stripped and suffering.”

The Catholic clergy in attendance included Redemptorist Father Mark Owen, associate pastor of Sacred Heart of Jesus-Sagrado Corazon de Jesus, and Father Jaime Garcia-Vasquez, associate pastor of St. Francis de Sales Parish in Abingdon and Prince of Peace Parish in Edgewood, who was born in Colombia. Presbyterians and Baptists were among other faith groups participating in the event.

“We need to stand in solidarity with those being viewed as marginalized, but who in fact are integral parts of society,” said Bishop Douglas Miles, pastor of Koinonia Baptist Church. “Many of their fore-parents were here before the Europeans arrived. To view them as outsiders is a sin.”

The sun had long set on a not-so-hot summer evening when Father Lewandowski put the Stations in perspective.

“If your feet hurt, try walking for 14 days,” Father Lewandowski said. “If you’re thirsty now, think of the thirst (experienced) in the desert. If you think we walked a long way, we walked 14 blocks. Think of walking 1,400 miles.”

NEXT: Immigration policy ‘will have terrible human consequences,’ bishop says