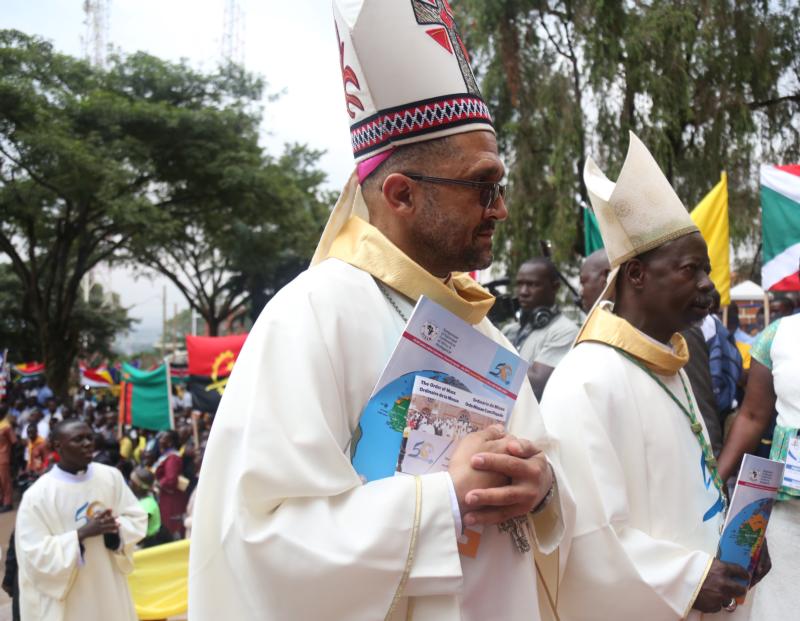 Africa’s bishops pledged to work together to ensure that the continent’s resources serve development and peace of all people.

“Confronted with the anguish of our people,” the Symposium of Episcopal Conferences of Africa and Madagascar has always “aimed at being a sign of hope, especially for families and our countries,” said a July 28 message signed by Cardinal Philippe Ouedraogo of Ouagadougou, Burkina Faso, as the organization’s weeklong meeting celebrating its founding 50 years ago ended in Kampala, Uganda.

The symposium, known as SECAM, “is a commitment to the service of reconciliation, justice and peace, which promotes communion and pastoral solidarity,” the message said. Such solidarity will enable standing against threats including “ideological colonization, land grabbing, political and democratic destabilization, human trafficking, terrorism and arms trafficking.”

Cardinal Ouedraogo, who was elected president of SECAM during the meeting, presided at the closing Mass at the Uganda Martyrs’ Shrine outside of Kampala, Uganda’s capital.

He urged the thousands who traveled from throughout Uganda and neighboring countries to put God first in their lives.

Delivering the homily at Mass, Bishop Sithembele Sipuka of Umtata Mthatha, South Africa said that “there must be new beginnings in our lives that demonstrate that we are truly pilgrims making a journey toward God, growing in holiness.”

He urged young people to “keep doing what is good … because you will not only save yourself, but you will also save others.”

“Afro-pessimism, where everything bad is associated with Africa,” and “Afro-optimism, which tends to romanticize Africa as paradise,” should be replaced by realism, Bishop Sipuka said.

Before and after the Mass, Catholic worshippers sang as they drummed and danced outside the shrine.

John Kasadha, a lay leader at Kaguli Catholic Church, led a contingent of 200 to the Mass. He said they and others who attended wanted to “get blessings from the over 100 bishops celebrating the Mass.”

For Jospeh Batuliluno of Nsambya Parish, the liturgy was “the most wonderful” he had attended. “Everyone was happy,” he said, singing at the top of their voices. I could see that the bishops were also happy and excited.”

Afterward, Cardinal John Njue of Nairobi, Kenya told Massgoers that the bishops resolved to be a “sign of hope for the underprivileged, especially those who land is being grabbed.”

The bishops, he explained, will guardedly eye government to ensure that political leaders serve the needs of all citizens and will speak out when governments oppress people.

In their final message from the meeting, the bishops committed themselves to helping young people “to be more deeply rooted in the values of the Gospel in order to prevent them from engaging in all forms of fundamentalism and violence.”

Pastoral care of the family “so that it can bear prophetic witness within the society” emerged as another priority for SECAM members, as is strengthening ecumenical and interfaith relationships, the message said.

Participants also said they would “deepen collaboration with our political leaders and call them to accountability so as to put our human and natural resources at the service of development, reconciliation, justice and peace.”

Attention will be given to “migrants, refugees and all who are still victims of slavery and human trafficking,” the message said.

The bishops urged “missionary exchange among the different dioceses of the continent, particularly with those in North Africa.”

“We urge Christian communities to be more attentive to interpersonal relationships, to sharing, to the struggle against misery; to be involved in the pastoral care of health, both spiritual and physical; and to be committed to responding to integral ecological challenges of our time,” the message said.

Contributing to this report was Godfrey Olukya at the Uganda Martyrs Shrine.

PREVIOUS: Cause for beatification of British missionary in Zimbabwe opens Sept. 5

NEXT: Pope: Prostitution is ‘disgusting vice’ that tortures defenseless women