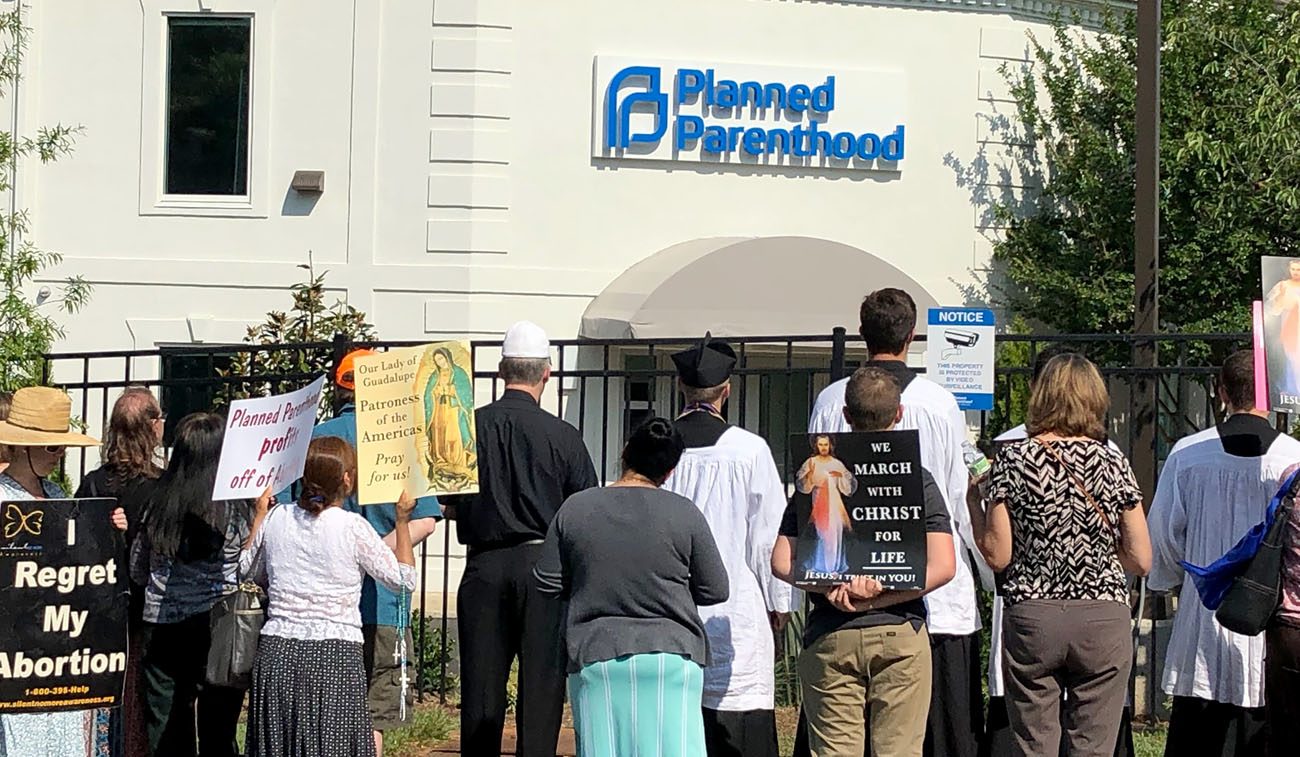 Catholics pray for an end to abortion during a June 15, 2019, procession and rally outside Planned Parenthood's new location in Charlotte, N.C. The facility is larger than its previous location and is located in a historically African American neighborhood of Charlotte. Pro-life groups, grassroots organizations and churches have united in opposition to the new location. (CNS photo/Patricia L. Guilfoyle, Catholic News Herald)

CHARLOTTE, N.C. (CNS) — As Planned Parenthood prepares to open Charlotte’s newest abortion facility this summer, pro-life groups are responding by organizing prayer rallies and sidewalk vigils in front of the facility, and by generating awareness of abortion among local Catholics.

Among these groups, one has a unique focus in mobilizing Catholics from an often overlooked demographic: Catholic teenagers. This group is called EPIC and stands for “Each Person Is Cherished.”

Founded in 2014 by St. Patrick Cathedral parishioner and pro-life teen activist Molly Rusciolelli — now professed with the Franciscan Daughters of Mary in Kentucky — the group is open to Catholic teens from ages 13 to 19 and its members participate in a variety of pro-life activities.

EPIC coordinates a monthly prayer vigil at the site of the soon-to-open abortion facility, organizes pro-life conferences, and hosts social and educational events. This past spring, it organized a pro-life movie night during which teens viewed and discussed “Gosnell: The Trial of America’s Biggest Serial Killer,” a documentary about convicted abortionist Kermit Gosnell.

They also hosted a speaker from the national group Students for Life to empower the teens to engage in pro-life conversations with their peers.

Prayer and fasting is a key component to EPIC’s activities as it also runs a prayer and sacrifice sign-up page where members are asked to offer prayers and small penances each month. Recognizing that many teenagers are dependent on their parents for transportation, this offers an option to help end abortion without leaving home. The group also has an e-mail list to keep members updated on upcoming activities.

With Charlotte’s fourth abortion facility set to open, EPIC is renewing its efforts to engage Catholic teens and invite them to participate in pro-life advocacy.

Mary Ohlhaut, a 17-year-old St. Ann parishioner and cousin to Rusciolelli, now leads the group, supported and mentored by her parents, Dan and Beth Ohlhaut.

“Abortion is a defining moral issue among my generation, and teens have shown their enormous interest in ending abortion by participating at the March for Life in D.C. each January,” said Ohlhaut. “We want to let them know there is an outlet at home where they can continue that momentum and enthusiasm for pro-life work for the rest of the year — that place is EPIC.”

To engage more Catholic teens in the pro-life cause, EPIC is seeking to form a leadership team of teens and parents to expand its reach and activities. The team would focus on social media, email communications, publicity, event organizing, hosting an annual conference, coordinating prayer efforts and fundraising.

The goal is to have one to two teens per task along with a parent or other adult to support them. No prior experience is required and the roles would only take a few hours a month. With a team in place, Ohlhaut believes EPIC can hold more pro-life events and activities — thereby enabling teens to help end abortion in Charlotte.

“My generation of pro-life teens, which has grown up in the climate of easy access to abortion, wants to make it illegal and unthinkable. We want to help mothers and their babies,” she told the Catholic News Herald, newspaper of the Charlotte Diocese.

“We want to make reparation to the Sacred Heart of Jesus and the Immaculate Heart of Mary for the outrages committed against Our Lord and Our Lady in the abortion facilities in our city. And we want to inspire one another to not grow tired of fighting this spiritual battle,” Ohlhaut continued.

“EPIC is the place where we can do this, while growing in leadership and team-working skills that will prepare us for a lifetime of involvement on this issue of great national and moral importance.”

FitzGerald is a correspondent for the Catholic News Herald, newspaper of the Diocese of Charlotte.