Circle of Protection members, others see much to like in budget deal 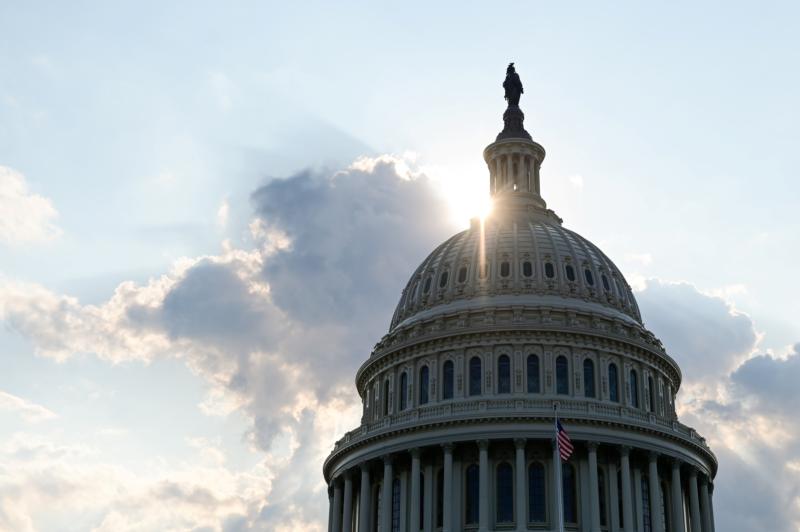 The dome of the U.S. Capitol is seen as the sun sets on Capitol Hill in Washington July 26, 2019. The U.S. House passed a budget bill July 25 and the Senate OK’d it Aug. 1 and sent to President Donald Trump for his signature. (CNS photo//Erin Scott, Reuters)

WASHINGTON (CNS) — There is a lot to like in the two-year budget worked out in Congress and signed by President Donald Trump, according to faith-based institutions that are members of the Circle of Protection.

The U.S. Conference of Catholic Bishops and Catholic Charities USA are members of the Circle of Protection, as is Bread for the World and about 140 other Christian organizations.

The Circle of Protection had, in March, urged Congress to pass a bipartisan budget agreement.

“We believe budgets are moral documents; they reveal our values and show our priorities. Budgets show who and what we view as important,” the letter said. Without a deal, it added, “discretionary funding levels will return to austere levels required by the 2011 Budget Control Act, putting non-defense discretionary programs at risk of deep cuts.”

Yet “it is not enough to simply prevent cuts to domestic and international anti-poverty programs,” it said. “We call for additional investments in these programs.”

“Sequestration and the looming threat to low-income programs is completely off the table,” Adams said, “There was the looming cloud that if a deal was not reached or the numbers didn’t turn out the way they wanted them to, there’d be cuts,” she added. “That’s the biggest, most positive portion of this deal.”

The budget deal will increase funding across the board for defense and non-defense programs by $320 billion over the next two years.

Anthony Granado, vice president of government relations for Catholic Charities USA, cautioned as to what may lie ahead.

“I certainly was happy that an agreement was come to, that they lifted the caps, that they addressed the debt-ceiling issue,” Granado said. The two-year budget deal does away with the debt ceiling, which had been the focus of a decade-long tug-of-war in congressional budget battles. “We’re pleased with that, because that will bring stability to this process. But the devil’s in the details.”

Negotiations are ongoing over what the allocations will be for each of a dozen separate appropriations bills, Granado told Catholic News Service. “We thought by now they’d have some agreement, but there’s been some disagreement, as you can imagine, between Democrats and Republicans on these top-line numbers.”

The Rev. Galen Carey, the National Association of Evangelicals’ vice president for government relations, was likewise grateful for the lifting of the budget cap to provide more assistance for the poor, but “they did not do anything to address the deficit and debt issues, which is basically putting off a problem that’s going to get worse and worse. We think debt should be addressed by looking at the very large entitlement programs” rather than cutting aid to the poor.

Also missing in the deal, Rev. Carey said, was “looking at ways to increase revenues. … We have resources to care for the poor and exercise financial responsibility. But it takes political courage, and our leaders have not been eager to do things to make that a possibility.”

Amelia Kegan, legislative director on national policy for the Friends Committee on National Legislation, hailed the bipartisan nature of the agreement. “That Congress came together to raise the debt ceiling is incredibly important,” she told CNS.

One downside for Kegan: “We’re a Quaker lobby” — the Quakers are one of three historic peace churches, along with the Mennonites and the Church of the Brethren — “and seeing continued increases in Pentagon spending is something we were very disappointed to see. Those dollars can be used better elsewhere.”

Kegan said that, despite the individual and collaborative efforts of so many Christian organizations in the Circle of Protection, “we can’t do it alone. We do it in partnership with the fed government to address hunger and poverty in our communities.”

A July 26 statement from National Right to Life Committee president Carol Tobias thanked Trump and GOP leaders for their role in preserving pro-life policies in the budget deal.

The budget deal “didn’t really deal with how we’re going to pay for the thing the nation really needs,” said Sister Simone Campbell, a Sister of Social Service who heads the Catholic social justice lobby Network.

She acknowledged that issues like housing and health care won’t get all the attention they deserve in the months ahead as Congress must fund the 2020 Census. “Still, there’s a big enough pot to take care of most — some — of the priorities that we have. It can take care of the of the priorities we have at Network to mend the gap” between rich and poor.

“They raised the debt ceiling high enough so that it won’t really matter. That’s the Republicans’ way of saying we’re not going to deal with taxes, and we have a big enough credit line on our national credit card so we don’t have to worry about it,” said Sister Campbell. “The big thing was that non-defense spending got equitable treatment with defense. That was important, and they should be applauded.”

PREVIOUS: Knights give over $185 million to charity, 76 million service hours in 2018

NEXT: Women religious build bonds as they work together to assist immigrants