Women religious build bonds as they work together to assist immigrants

Immigrants, mostly families, walk to San Antonio's Travis Park Church June 29, 2019, where they will spend the night while waiting for transportation to other parts of the U.S. In former Sunday school classrooms filled with blue and green cots, some 270 immigrants from Central America, Haiti and the Congo will take shelter in the facility, a stopover on their way to what they hope is a new life in other parts of the country. (CNS photo/CNS photo/Nuri Vallbona, Global Sisters Report)

In former Sunday school classrooms filled with blue and green cots, some 270 immigrants from Central America, Haiti and the Congo would take shelter for the night, a stopover on their way to what they hope is a new life in other parts of the country. As Sister Connolly passed, they tugged at her arm and peppered her with questions.

A woman held up a leaking baby bottle and asked if there was another one. Around the corner, two young Haitian girls point to their bare feet. Were flip-flops available, one asked? Moments later a young girl said she is hungry.

“Lo siento,” Sister Connolly said, shaking her head. There was no food in the overnight shelter. “I’m sorry.”

On this June evening, Sister Connolly and Sister J.T. Dwyer, both Daughters of Charity of St. Vincent de Paul, joined volunteers helping border crossers after their release from Border Patrol stations and detention centers in Texas.

They are among some 1,000 Catholic sisters in border states who have been ministering to immigrants seeking safety in the U.S. since the surge began last fall, according to the Leadership Conference of Women Religious estimates.

Some help at temporary shelters, offer travel assistance or even send shoelaces to replace those confiscated by border agents. Others pray, donate funds or join protesters, such as Sister Jean Durel, a Sister of Charity of the Incarnate Word, who was arrested for lying down on the floor of the Russell Senate Office Building in Washington July 18.

Volunteering as part of the Interfaith Welcome Coalition’s mission to assist migrants, the San Antonio sisters avoid talking about themselves. They prefer to focus on the collaborative efforts of various groups who came together when immigrants, primarily families, overwhelmed the city in March. Yet it is the sisters’ ability to build relationships with those they serve and those in authority that has made a lasting impression on coalition leaders. 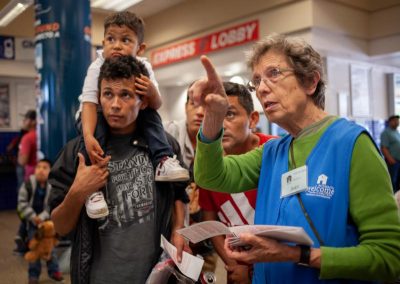 “I believe Jesus is present in this people, especially those who suffer and so for me … that’s my adoration,” Sister Connolly told Global Sisters Report.

About 20 sisters from 16 congregations in the archdiocese are helping in the San Antonio effort, Sister Denise LaRock, a Daughter of Charity of Saint Vincent de Paul, estimates. That doesn’t include those across the country, such as Sister Janet Dohr, a Sister of the Most Precious Blood, who sends shoelaces from O’Fallon, Missouri, or other congregations that send money.

At the heart of this effort is the faith that the sisters say inspires them.

“The Scripture about ‘welcome the stranger.’ … It’s without a doubt our ongoing driving force,” Sister Connolly said.

But they consider their calling much more than greeting immigrants. Advocacy is an important part and how they do that inspires others.

“I feel like, that sometimes when I’m with them, that God’s grace incarnate is with me,” said coalition co-chair Lenna Baxter. “I’ve truly learned from these women so much.”

One key lesson: how to ask for help from those in power. When the coalition started in 2014, its relationship with U.S. Immigration and Customs Enforcement officials was at times contentious.

“We did not like ICE at all,” Baxter said. But that changed as she watched the sisters at work.

When various groups went to the Texas Capitol to protest a potential Senate bill in 2017, Baxter said a woman snuck in a sign and was grabbed by two Capitol police.

“I was just so angry and I was just yelling at them, ‘Just ‘let this girl alone!'” Baxter said.

However, she noticed that Sisters Dwyer and LaRock and Sister Sharon Altendorf, a Sister of the Presentation of the Blessed Virgin Mary, remained quietly in their seats while the woman was escorted out.

“This is the model that I need to follow; this is the way I need to go,” Baxter said. “They don’t get up and yell … (yet) people in power listen to them.”

Noting this, Baxter and others in her organization changed their approach with positive results.

“Instead of having an adversarial relationship with ICE, we have a cooperative relationship,” Baxter said. “We don’t agree with everything they do, but we treat them with respect.”

As a result, ICE officials became more receptive when the sisters or volunteers asked for help. 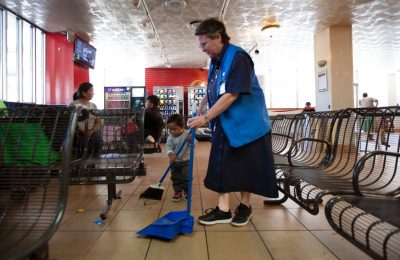 As an Interfaith Welcome Coalition volunteer, Sister Denise LaRock, a Daughter of Charity of St. Vincent de Paul, gives directions to 2-year-old Gustavo Hernandez of Guatemala June 14, 2019, as they sweep up the waiting area of the bus station in San Antonio. “I love playing with kids, too,” Sister Denise said. “It keeps me and them entertained while they wait for their buses.” (CNS photo/Nuri Vallbona, Global Sisters Report)

The bulk of the sisters’ work is at the Greyhound station where the coalition began assisting migrants during the immigration spike of 2014, later adding those arriving at the airport. Until March 2019, coalition volunteers were able to handle the influx. However, when 200 to 300 a day started arriving, the city was called.

“I was at the point of leaving at the end of the day and the place was full,” Sister Durel said. “It was just packed.”

As Sister Durel left, she said to herself, “Oh my God what is going to happen?” Two days later, the city opened a resource center across the street where immigrants could wait for buses away from the crowded station.

“If the city had not done that, people would obviously be on the streets,” Sister Durel said.

“We’ve had these partners who have been doing this great work and it wasn’t until there was a large surge that we really even needed to step in and help,” said Melody Woosley, director of the city’s Department of Human Services, which provides staffing, medical services and travel planning assistance, and partially funds meals from the food bank.

The number of migrants coming to San Antonio is unknown, but this year, the coalition passed out more than 17,000 backpacks for each household (two if it’s a large family), compared with 21,687 for all of 2018. That spike mirrors U.S. Customs and Border Protection statistics that show 390,308 family members were apprehended at the southwest border for the 12 months ending in June 2019, compared with 68,541 in 2018 for the same period in 2018.

Most backpacks are given out at the bus station where Sister Altendorf scanned the faces of watchful parents trying to keep their children in sight.

“Listos para el viaje?” she asked a family. “Are you ready for the trip?

Family members nodded and she moved on to a young man and asked where he was going.

Sister Altendorf explained his itinerary, pointing out where Jader Reyes of Nicaragua would change buses along the 1,826-mile trip to New York. He would arrive at 4:05 a.m. two days later. She asked how well he knew the person meeting him at the station — questions she has been trained to ask to protect immigrants from human trafficking and exploitation. Reyes answered yes; it’s a trusted friend.

Describing the political violence shaking his country, Reyes said peaceful protesters are often jailed and tortured. “We are facing persecution because the government is communist,” he said. “They came to put me in prison. I fled because I know what they do in jails.”

After he got to New York, Reyes hoped to one day reunite with the family he left behind — his wife, son and a newborn daughter he has yet to meet. “We come here with no money; we don’t know anything; it’s a big help,” he said of Sister Altendorf’s assistance.

Sister Altendorf repeated this process over and over, later joined by Sister LaRock, who picked up an energetic 2-year-old named Gustavo to give his mother a break. Laughing, she carried him through the terminal with Sister Altendorf at her side. At one point she handed him a broom and followed him with a dustpan while he cleaned the floor.

As the mission grows, the women religious from different orders draw closer. Though they see each other at jubilees, funerals and other events, Sister LaRock said “there’s a deeper connection” that comes from this shared effort. They’ve developed a camaraderie that inspires each other.

“We are one heart,” Sister Connolly said. “The people who are not used to being around sisters, they’re absolutely amazed at how we support each other; how we appreciate each other and how we care about each other.”

More than 800 employees, many who volunteer, have staffed the resource center, city official Woosley said. Travis Park Church opened its doors for those needing overnight shelter, while the Refugee and Immigrant Center for Education and Legal Services, or RAICES, offers legal aid.

Even Greyhound employees pitch in. Connie Obregon, who cleans the terminal daily, reserves a section so the migrants can sit together.

“We’re just all working together,” Sister Altendorf said. “That’s why we get so much hope … because there’s so much good, so many people wanting to work with us, so many people willing to do whatever they can, not just the sisters.”

Vallbona is a freelance documentary photojournalist.

PREVIOUS: Circle of Protection members, others see much to like in budget deal

NEXT: Teen who died saving classmates in Colorado school shooting made a Knight