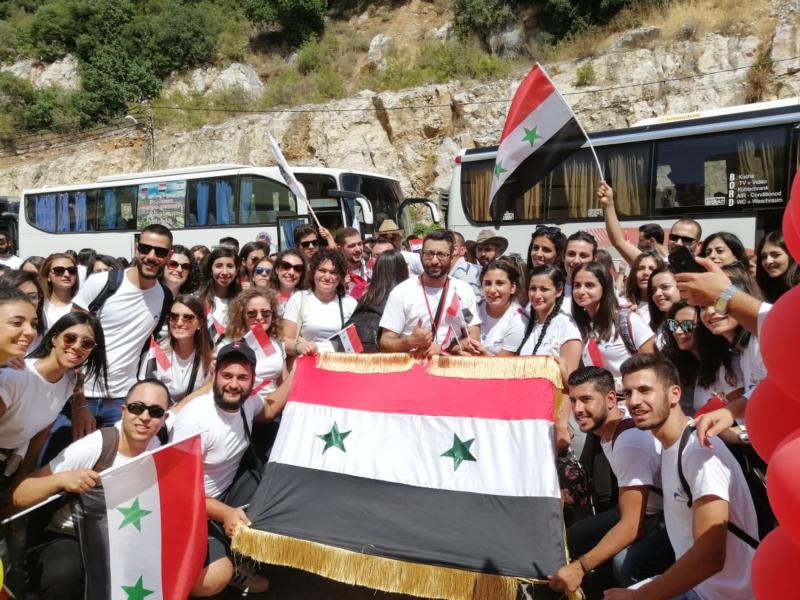 More than 100 young adults from Damascus, Syria, pose Aug. 9, 2019, after arriving at the Liqaa Conference Center near Beirut. Meeting under the theme, "To You I Say Rise," more than 900 Melkite Catholic young people from the Middle East gathered in Lebanon for the first conference especially for them, hosted by the Melkite Patriarchate. (CNS photo/Doreen Abi Raad)

More than 100 young adults from Damascus, Syria, pose Aug. 9, 2019, after arriving at the Liqaa Conference Center near Beirut. Meeting under the theme, “To You I Say Rise,” more than 900 Melkite Catholic young people from the Middle East gathered in Lebanon for the first conference especially for them, hosted by the Melkite Patriarchate. (CNS photo/Doreen Abi Raad)

BEIRUT (CNS) — Full of zeal for their faith, 920 Melkite Catholic young adults from the Middle East gathered in Lebanon for the first conference especially for them.

Meeting under the theme, “To You I Say Rise,” the participants, ages 18-35, came from the Palestinian territories, Syria, Egypt, Jordan, Kuwait and Lebanon for the Aug. 9-13 event, hosted by the Melkite Catholic Patriarchate.

Edward Nazarian, 22, a student in medical devices engineering from Aleppo, Syria, said the conference restored hope for young people, particularly those from Syria.

“After going through so many years of war, we fell into despair. We are here to renew that hope, that confidence and faith,” he told Catholic News Service.

Melkite Father Kamil Melhem, spiritual director for young adults, told the group at the opening that the conference would “be the first spark that will illuminate the paths of our faltering lives in the East.” The main venue was the Liqaa (“gathering”) Conference Center, located in a valley beneath the Melkite Patriarchate in Rabweh, 12 miles north of Beirut.

The event combined prayer, educational workshops — including communication and social media — and presentations related to the Melkite Catholic identity. Participants also visited holy sites of Lebanon, including Harissa, Our Lady of Lebanon, the tomb of St. Charbel and the biblical coastal cities of Tyre and Sidon in South Lebanon.

Melkite Patriarch Joseph Absi told participants in his opening address, “You came carrying a variety of flags, but one banner unites you, the banner of Jesus Christ.”

He continued, “There are many voices and noises in your life, attracting you, disputing you … tiring you, but today the voice of Jesus is calling each of you.”

Patriarch Absi advised the young adults: “Open up to each other and communicate. Show each other your dreams and aspirations, and share your fears and concerns. Unite, because you are the power that can create a new Pentecost.”

Emphasizing that young people are precious to the church, Patriarch Absi told them: “Thank God you are here. You have heard the voice of Jesus Christ who says, ‘Rise!'”

“It’s great to see the unity of the church,” said Nadine Zayat, 24, a recent graduate in sociology from Cairo. “Even though we’re from different countries and different backgrounds, we’re all united in Jesus; this is why it’s so special. It’s great to meet new people, have fun and encourage and support each other to continue our message in our countries. I’m hoping more people get to know Jesus.”

Even though it is forbidden in Egypt to preach in the streets, she said, Christians “are a witness by the way we act.”

“The youth, when they come together are very strong,” Father Achaia told Catholic News Service. “They can do a lot.”

As Christians living among Muslims in the Middle East, he said, “we have to be a light. We’re taking this light from Jesus, and we reflect it, first in our self, and then onto the others.”

For 32-year-old Khaldoon Al Haddad, who works at the Central Bank in Amman, Jordan, the gathering was a chance to exchange and share ideas. He told CNS one of the biggest challenges of working with a youth group in his parish is to engage teens, amid all their activities and the “noise of the world.”

“I hope to come back (to Jordan) with new ideas, new ways and methods to bring youth back to the church,” he said.

During lunchtime the first day, horns bellowed from three buses signaling the arrival of 110 young adults from Damascus, Syria, after more than 10 hours of travel. The journey, under normal circumstances, should not exceed three hours. However, because of their large number, procedures at the border crossing between the two countries caused their delay.

Emerging from the buses, the Syrians’ weariness transformed into exuberance at the celebratory welcome. A group of Jordanians played traditional bagpipes and thundering drums. There was cheering, clapping and waving of Syrian flags. Young adults joined arms for the step-and-stomp traditional dabke dance.

Dina Fares, 26, an English teacher from Damascus, told CNS: “We are so tired. But we are so excited to be here. … We’re here to say, ‘There are Christians in Syria. We’re still here (in Syria), and we’re not going anywhere.'”

Inside the venue, Patriarch Absi posed for selfies and group photos with the newcomers from his native Damascus.

Elsewhere, Natalie Abou Sada, a 21-year-old graphic designer, was one of 11 young adults from the Palestinian territories.

“I’m very proud to represent my country. From here to Palestine, I want to bring back a message of peace and love. Peace is most important,” she told CNS. “We always pray for a better life.”