After Amazonians migrate to cities, they struggle to survive 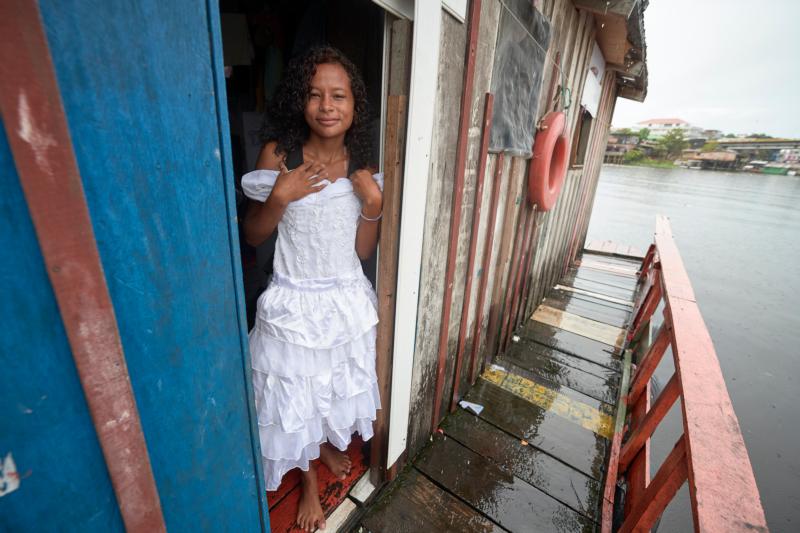 Beatriz dos Santos Rodrigues, 18, holds the dress she wore to her 15th birthday party as she stands in the doorway of her family’s floating house, tied to a riverbank in Manaus, Brazil. Caritas, the social ministry of the Catholic Church, bought her the dress, which she will hand down to her little sister. The two girls participate in a Caritas program aimed at preventing sexual abuse and exploitation of children and adolescents. (CNS photo/Paul Jeffrey)

MANAUS, Brazil (CNS) — On Christmas Eve of 2015, Marcia Soares’ home was bulldozed into oblivion, and with it, her dreams for the future.

She and her husband had bought a small lot in a new neighborhood in a poor area of this Amazonian city. They had built a simple house and opened a small bakery, where they made bread. They dreamed of a secure future for their three children.

But that Dec. 24, as helicopters circled overhead, bulldozers arrived and leveled the neighborhood, leaving thousands of people on the street.

The person who’d sold the lots had not been the real owner of the land. Someone who claimed to be the owner — which may or may not have been true — came along and ordered the destruction of the homes, with help from the police.

“We saw the sunrise as we huddled on the ruins of our homes,” recalled Soares, 39. “It was like I imagined a war zone would be.”

Her children cried from hunger, but there was no food and no money for groceries. The nightmare continued for two weeks, as they were forced to live on the sidewalk outside the property where their home used to be.

“But we had our lives, and the strength of our will,” she said.

Hope for the future came in the form of an empty building in a gritty commercial section of downtown Manaus. The 15-floor structure, which had been abandoned for eight years, was run-down, but it offered a roof and walls and relative safety.

With help from Caritas, the Catholic Church’s humanitarian aid and development office in Manaus, 52 families moved into the lower six floors of the building.

But their troubles were not over. Just days after they moved in, police arrived at the building. The families gathered in the corridor and prayed, Soares recalled. In the end, they were able to stay, “but the children were traumatized,” she added.

Her daughter, Emily, who is now 9, was afraid to go into the hallway, out of fear that the police would return, and she is still skittish at the sound of helicopters, her mother told Catholic News Service. 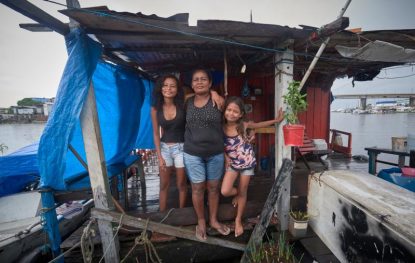 Maria Jose dos Santos Rodrigues, center, and two of her three children, Beatriz, 18, and Aguida, 9, pose on the front porch of their floating house, near a riverbank in Manaus, Brazil. The children participate in a Caritas program aimed at preventing sexual abuse and exploitation of children and adolescents. Caritas is the social ministry of the Catholic Church. (CNS photo/Paul Jeffrey)

The families organized and drew up rules — no drugs or alcohol in the building, no prostitution, no sexual abuse of children — and they take turns providing security at the door of the building, a paid job to which all the families contribute.

At first, local shopkeepers looked askance at the newcomers, seeing them as squatters and fearing they were criminals, Soares said. So the families sent a letter to businesses in the neighborhood, telling them they were families of workers.

Mention of the Amazon is likely to conjure images of snaking rivers, seemingly endless forests, indigenous villagers and exotic animals. But poor harvests or a desire for jobs and an education drive people from rural areas to fast-growing cities, which generally are poorly planned and ill-equipped to deal with the influx of newcomers.

Some Amazonian towns and cities trace their founding to early Spanish or Portuguese missions. And virtually all, including Manaus, were built on what was once the ancestral territory of the indigenous people who were the region’s original inhabitants.

With some 2 million residents, Manaus is the Amazon’s largest city. Iquitos, the largest Amazonian city in Peru, has grown to about half a million, even though it is accessible only by air or river. Both cities maintain faded vestiges of the elegant architecture of the rubber boom era of the late 19th and early 20th centuries.

Manaus got a boost in the 1960s, when the government granted tax breaks to attract industry, and its 600 or so factories continue to attract job seekers.

When people arrive, they face an uphill struggle. Housing is scarce, inadequate or expensive. Newcomers generally settle around the edge of the city, in neighborhoods that often lack public services like water and sewers.

People do what they can to survive.

Some, like Soares, scrape together some cash and buy a lot, but those deals are often fraudulent, and the buyers end up on the street again when the “real” landowner shows up.

Others make do in tiny spaces carved out of old houses. Elizangela Ribeiro Pereira and her nine children, ranging in age from 7 months to 22 years, crowd into three cramped rooms near the river port. She rises before dawn to sell vegetables in the local market, often taking home just a few dollars a day.

When parents work long hours for low pay, it is hard to keep tabs on the kids. Under those conditions, children and teens can be tempted to start drinking or using the drugs sold on street corners, said Marcela Dias de Albuquerque, 38, an education specialist in the Caritas social ministry office.

Pimps troll for girls who need money for clothes or school supplies, luring them into prostitution.

In 2008, to help families dodge those hazards, Caritas launched a program aimed at preventing violence and against sexual abuse and sexual exploitation of children and adolescents. The program provides psychological assistance, as well as activities for children ages 6-18, during the hours when they are not in school. The program operates in buildings like the one where Soares lives and at a center called Bethany House.

“The idea is to create a safe space,” said Dias de Albuquerque, who was a catechist in a parish in a poor neighborhood on the outskirts of Manaus and volunteered at Caritas before beginning to work full time for the church organization.

Through theater, sports and dance, the youngsters develop skills, learn to express themselves and control their emotions, and respect other people, said Marcelo Texeira da Silva, 32, one of the teachers in the program.

Some of the children, even the youngest, have survived experiences that would traumatize adults. One school-age girl had seen her parents murdered and had been splattered with their blood before entering the program.

“The first thing you see is that they’re turned in on themselves and they have little self-esteem,” Dias de Albuquerque said of newcomers to the program. Many are exposed to violence at home. They don’t talk much and are hyperactive or easily upset, she said.

But that changes with time. At a monthly meeting for families in early April, youngsters sang, danced and recited poetry as part of an early Mother’s Day celebration.

Kids join the program in various ways. Staff members visit schools, talking to teachers and students and showing videos about family situations. That often prompts students to seek them out to talk about problems at home.

Dias de Albuquerque also keeps an eye out when she is walking around poorer areas of Manaus, like the neighborhood near the river where she met Maria Jose dos Santos Rodrigues. Pregnant and with three small children in tow, Rodrigues was scavenging through garbage in search of bottles, cans or anything else that she could sell to a recycling company for a few cents.

Home for Rodrigues and her children was a small boat moored by the river bank, for which she had to pay rent. The roof leaked, and Rodrigues was constantly terrified that one of her children would fall into the river, because they did not know how to swim.

Dias de Albuquerque stopped to talk with her, gradually gaining her trust. The older children were school age but were not attending classes because neither they nor their mother had identity documents.

That problem is not uncommon among people who arrive in Manaus from a rural area, and it places children in a precarious situation, said Dias de Albuquerque, who helped the family obtain documents and enroll the children in school and in the Caritas program.

A good Samaritan offered them a safer home — a house built on pontoons, close to the boat where they were living. The floating dwelling is sparsely furnished, with a small garden near the front door.

Many people from communities along the Amazon and its tributaries travel to Manaus to do business or purchase goods, mooring their small boats near the family’s house. That created a new opportunity for Rodrigues, who now makes a living as a boat caretaker, keeping an eye on a dozen or so boats at a time for about $6 per week per boat.

Her children go to school and to the Caritas program, rowing the short distance from their house to the shore in a small canoe.

One afternoon, Rodrigues’ daughter arrived at an activity with a gift from her mother, a package painstakingly wrapped in a piece of black plastic and tied with scavenged electrical cord.

Dias de Albuquerque removed the wrapping with care. Inside lay a pearl necklace, a treasure that Rodrigues had found in the trash during those hard days spent scavenging on the street, saved for years, and now offered as a gift to the person who had helped her build a new life.

NEXT: Struggles of families uprooted by Belo Monte reveal the dam’s dark side