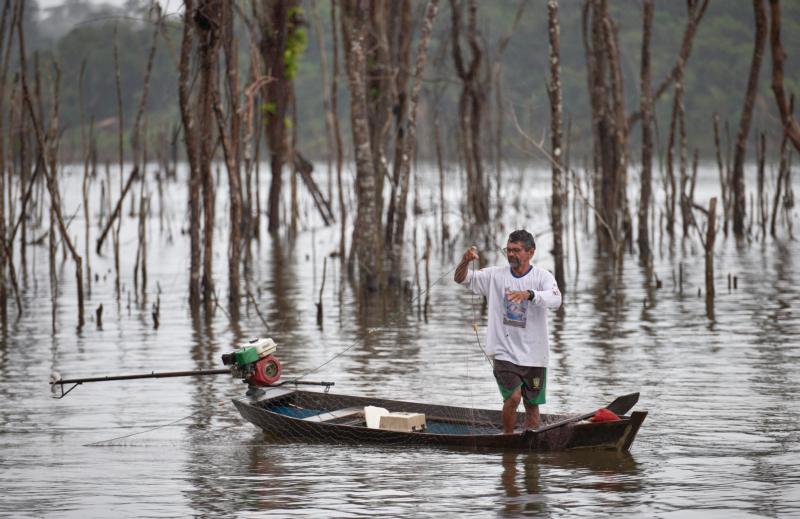 ALTAMIRA, Brazil (CNS) — Treetops poke above the surface of the lake that laps at the shore of this Amazonian town.

“People used to live there,” said Joana Gomes da Silva, pointing to the cluster of skeletal trunks and branches. “It was a very pretty house. It’s underwater now.”

So is the place where she and her family lived. It was submerged when the controversial Belo Monte hydroelectric dam was built on the Xingu River, creating a huge reservoir that uprooted them and inundated the fishing grounds on which their livelihood depended.

“After the dam was built, it was a year before I came back to the river,” said Gomes da Silva. “It was all different. The places where there had been houses, communities, where my neighbors had lived — it was all gone.”

Amazonian countries, especially Brazil, have increasingly turned to hydropower to generate electricity. The region’s abundant rivers are considered a renewable source of energy. But science is showing that hydropower is not as environmentally friendly as once thought, and the struggles of the families uprooted by Belo Monte reveal the dam’s dark side.

“Megaprojects” like the 11,000-megawatt Belo Monte Dam, one of the largest in the world, are likely to come under scrutiny when bishops meet at the Vatican in October for the Synod of Bishops for the Amazon. Such projects were among the top concerns voiced by Amazonian people during a series of assemblies held last year to provide input for the synod.

The working document for the synod refers to “the invasion of great so-called ‘development’ projects, which actually destroy … in the name of progress,” with the support of local, national and foreign governments.

The people who were forced from their homes by Belo Monte have not given up. Gomes da Silva is now part of a movement of more than 300 displaced people who seek to return home, or to as close as possible to where their homes used to be, in an effort to resume a normal life.

She and her family lived for two decades on an island in the river, in an airy, wooden house. Like many families, they also had a house in town, close to the river. They moved back and forth between the two, going to the river to fish for a time, then back to Altamira to sell their catch and buy provisions.

The dam upended their lives. The most valuable species of fish, which lived in the river, have not adapted to the still waters of the lake and have disappeared. Fisher families spend more time casting their nets for fewer and fewer fish, said Gomes da Silva, and the ones they catch fetch less at market.

Where her family used to net more than 250 pounds of fish in a week, they now catch barely 70 pounds. With the decreased catch came a sharp drop in income, but their expenses went up. They spend more on boat fuel, because they must travel a longer distance to fish, and they pay more for transportation to their home from the port. 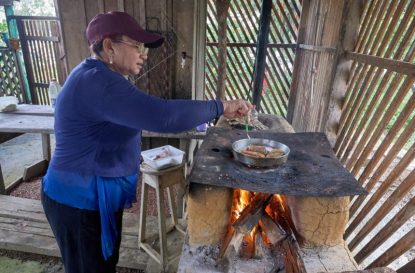 Francineide Silva was displaced by the flooding caused by the Belo Monte dam near Altamira, Brazil. As compensation her family was given a house in Altamira, but felt it was cramped and stifling compared to the places where they lived before. (CNS photo/Paul Jeffrey)

“Some families don’t make enough to cover expenses,” said Eraldo Paulino of Xingu Vivo, an organization of people affected by the dam. “Some have had to give up fishing altogether.”

People displaced by the flooding were moved to new neighborhoods, practically devoid of trees, carved out of land at the edge of town. The original plan was to offer houses of three different sizes, with larger dwellings for families with children and grandchildren, said Antonia Melo, who heads Xingu Vivo.

In the end, however, the neighborhoods were filled with rows of small, prefabricated houses. Neighbors were not resettled near each other, and the lack of space forced families to split up, sometimes in different neighborhoods. Gomes da Silva was separated from her siblings and has lost touch with most of the people she knew on the river.

In the neighborhood where Ailton Faustino de Freitas lives, many people have gradually drifted away, leaving their houses shuttered. De Freitas, 68, understands the reasons. He moved to one of the new neighborhoods in July 2015, from a low-lying area closer to the center of Altamira.

His old home was adobe, he said, with a high ceiling and large windows that kept the rooms cool in summer. The new neighborhood boasts street after street of cookie-cutter houses with cement walls and tin roofs that trap the heat. Ultimately, the old area did not flood, but it is now a park, so families cannot move back.

In his new neighborhood, he gets water from the tap every other day. The electricity is unstable — spikes have ruined two TV sets and a refrigerator, he said.

In his old neighborhood, de Freitas lived close to the Catholic church, where he was a minister of the Word in the parish. In his new neighborhood, he leads liturgies in people’s homes.

It is difficult to participate in evening services for Holy Week or feast days at the main parish church, however, because there is little public transportation to the city center, and the trip is unsafe at night.

“The dam didn’t bring benefits for the people who lived along the river,” he said.

Raimunda Nonata Souza dos Santos, 74, who lives a block away, disagreed. As the years passed, farming and fishing along the river had become more difficult for her, she said.

She was happy to move to a small house in the new neighborhood, where she sees her daughter and grandchildren more often, although tap water is intermittent and electricity is expensive.

The Belo Monte Dam was controversial from the start. Scientists criticized the project, saying it would seriously disrupt the flow of the Xingu River, affecting ecosystems both upstream and down.

And although water is a renewable resource, hydroelectricity in the Amazon is not really “green,” said scientist Philip Fearnside of Brazil’s National Institute of Amazonian Research in Manaus. That is because the trees and other vegetation submerged in the reservoir rot over time, producing greenhouse gases that contribute to global warming.

The project was held up for more than a decade because of protests by organizations like Xingu Vivo and indigenous groups. The government decided to go ahead with the project in 2010, however, and life in Altamira began to change drastically.

Thousands of workers arrived, seeking construction jobs. In a decade, the city’s population doubled. Workers sent money to relatives in other parts of the country and purchased goods from local businesses, said Jose Cleanton Curioso Ribeiro of the Catholic Church’s Indigenous Missionary Council office in Altamira.

Once construction was complete, however, the economic boom passed and jobs became scarcer. Some businesses have closed, and road paving and other urban infrastructure improvements were left half finished.

Many of the more than 20,000 people displaced by the flooding were indigenous. Brazilian law requires that indigenous people be consulted about projects that would affect their communal rights, but no consultation was held, Ribeiro said. The dam also has affected indigenous territories downstream. Although they were not flooded, they are suffering invasions from settlers and land speculators, he added.

An area inhabited by a semi-nomadic group that shuns contact with outsiders is now hemmed in on all sides, raising the risk of violent encounters or of exposure to diseases that could be fatal, because isolated Indians generally lack immunity even to common illnesses.

And now a new threat is on the horizon. The Toronto-based Belo Sun Mining Corp. is planning a large gold mine on some 600 square miles of land near the Belo Monte Dam, where illegal gold miners have been working. Melo worries that the project will pose an environmental risk, in the wake of two disastrous collapses of mine tailings dams at other mines in Brazil in 2015 and 2019.

Meanwhile, some of the fisher families displaced by the Belo Monte reservoir are planning to return to the fishing ground they abandoned, even though it does not resemble the river they left.

On a drizzly morning in April, Lindolfo Aranha Neto was fishing among the bare treetops that rise above the surface of the lake near the house he built with his wife, Francineide Silva. Although more rustic than their home in town, it is large and airy. A car battery powers a television and a refrigerator.

Chickens and ducks venture out of their pen under the last of the raindrops, scratching among the manioc plants and small fruit trees that the couple has planted.

Neto casts his net carefully, to avoid snagging it on submerged branches. He is adjusting to the changes, though he says the best fishing grounds are gone. The couple is among more than 100 displaced people who have moved back to start over. Several hundred more also hope to return, forming several small communities of scattered houses.

It won’t be the same, though. They will have to use different farming techniques, because the area around the lake is considered protected now, so they are prohibited from cutting down trees or burning the fields where they plant crops.

“All the time we lived here, we didn’t destroy anything,” Neto said.

Silva nodded agreement and said of the government agencies that approved the dam, “They’re the ones who destroyed.”

PREVIOUS: After Amazonians migrate to cities, they struggle to survive

NEXT: Development threatens way of life in Amazon’s Afro-Brazilian communities