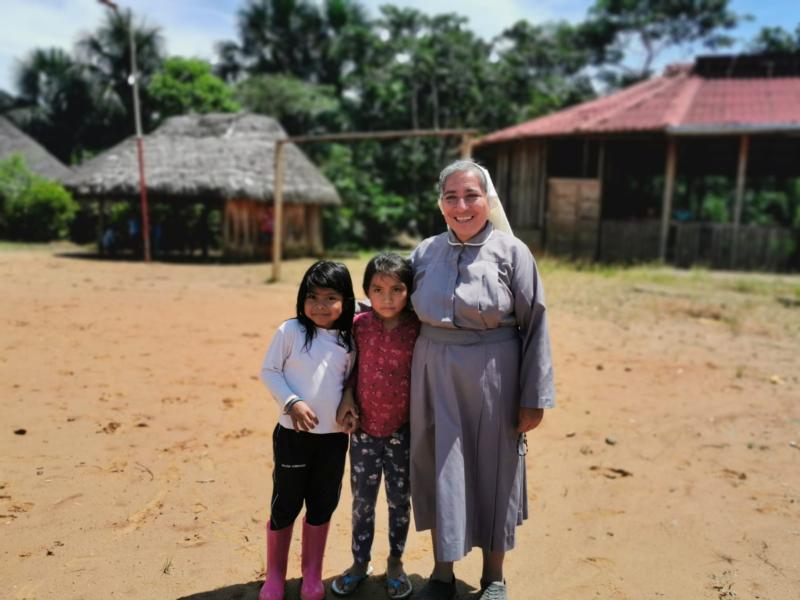 Sister Rosa Elena Pico, a member of the Missionaries of Mary Co-Redemptrix, poses for a photo with children from the indigenous community of Sarayaku, Ecuador, Sept. 18, 2019. Sr. Pico has worked and lived with the community since 2017 and occasionally leads the liturgy of the word in the absence of a priest. (CNS photo/Junno Arocho Esteves)

QUITO, Ecuador (CNS) — The upcoming Synod of Bishops for the Amazon will focus on the devastating effects of climate change on the environment and on indigenous communities, but it also will look at ways to meet the spiritual needs of the region’s people.

One of the big challenges in evangelization and ministry is the lack of missionaries and priests, which some people in the region believe can be resolved by the ordaining of married “viri probati,” or men of proven virtue.

The ordination of married “viri probati” would “respond to a concrete challenge in a concrete reality, for example, in the Amazon,” Spanish Bishop Rafael Cob, apostolic vicar of Puyo, told journalists in Quito Sept. 14.

The journalists were on a study trip organized by REPAM, the Pan-Amazonian Church Network, in advance of the synod Oct. 6-27.

“The Amazon is a geographically difficult region to evangelize first because of its distance, its inaccessibility,” the bishop said. But there also is a “lack of candidates who can or want to be priests with that discipline (celibacy). So, logically, the church is looking for new methods to respond to concrete challenges.”

The synod’s 45-page working document, published by the Vatican June 17, suggested studying “the possibility of priestly ordination for elders — preferably indigenous, respected and accepted by the community — even if they have an established and stable family.”

While Pope Francis has made it clear that he did not agree with allowing “optional celibacy” for priests, he did say he was open to studying the possibility of ordaining married men for very remote locations, such as the Amazon and the Pacific islands, where Catholic communities seldom have Mass because there are no priests.

One of those remote locations is the Kichwa indigenous community of Sarayaku, located deep in the heart of the Ecuadorian Amazon region and accessible only by small plane or a four-hour canoe ride.

Franco Tulio Viteri Gualinga, former president of the Confederation of Indigenous Nationalities of the Ecuadorian Amazon and a member of the Sarayaku community, told journalists Sept. 17 that sometimes a priest or a bishop will come every two weeks or sometimes just once a month.

In the absence of a priest, a nun living in the village will lead the community in a liturgy of the word, he said.

When asked about the possibility of having an ordained married elder person in the community, Viteri said, “that’s what the church needs to do.” He cited the example of his uncle, who is a catechist in Sarayaku, as a possible candidate.

However, for 58-year-old Sister Rosa Elena Pico, ordaining married men is not the only solution in an area that is “a challenging place to evangelize.”

Sister Pico, a member of the Missionaries of Mary Co-Redemptrix, and two other sisters arrived in Sarayaku in 2017 and often lead the Liturgy of the Word in the absence of a priest.

While nearly all the area’s inhabitants identify as Catholic, many prefer to keep the church’s influence on the Sarayaku’s culture at arm’s length, she said Sept. 18.

“Many do not want to commit to what the church demands,” Sister Pico told journalists.

One example is that out of the 1,400 members of the Sarayaku indigenous community, only six couples have received the sacrament of marriage. Many of the others, she said, believe that people who marry eventually will separate or divorce and would not be able to keep the lifelong bond of sacramental marriage.

Although she said she feels welcome in the community, she said she was asked to leave on two occasions for explaining the church’s teaching on marriage. Nevertheless, she told them she would stay “until the bishop tells me to leave.”

Sister Pico said that Christian formation, particularly among those who want to fulfill a ministry within the community, was very important in the region and that while there is a lack of priests, ordination of married “viri probati” isn’t the only solution.

“I believe that it is necessary that if there isn’t a priest, there must be somebody who should be a representative, for example, a permanent deacon who can administer the sacraments,” she said. “There should be permanent deacons in the communities.”

NEXT: Vatican releases list of participants for Amazon synod