Synod to be surrounded by events offering prayer, criticism, support 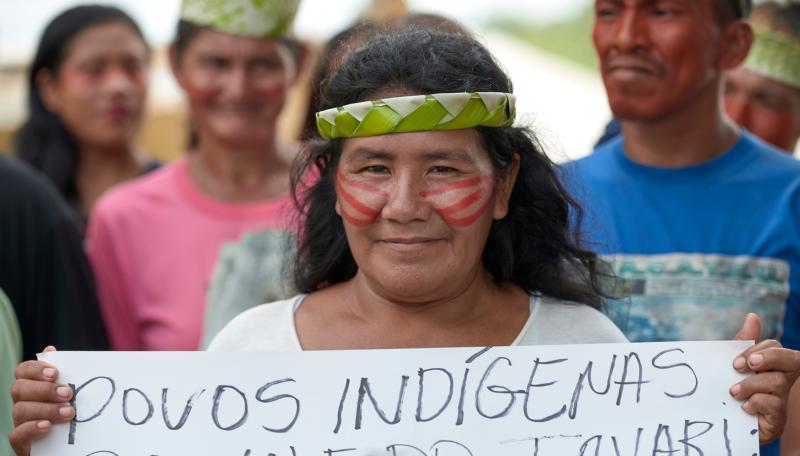 A woman in Atalaia do Norte, in Brazil’s Amazon region, is seen March 27, 2019. The Pan-Amazonian Church Network, with partners in Rome, will bring more than 50 indigenous leaders to the city “to guide and animate moments of spirituality, discussions and roundtables” and to talk about the challenges their people face and their vision of ecology and the future during the October Synod of Bishops for the Amazon. (CNS photo/Paul Jeffrey)

VATICAN CITY (CNS) — Before members of the Synod of Bishops for the Amazon began packing their bags for the synod assembly at the Vatican Oct. 6-27, a variety of groups were announcing side events.

The two, who are not expected to participate in the synod, have launched a 40-day “Crusade of Prayer and Fasting” to ask God to preserve the synod from the “error and heresy” they believe is implied in the working document for the assembly, especially in sections urging respect for the region’s indigenous people, their cultures, their spirituality and their relationship to the land.

They also believe the synod working document, which was written after consultation with the Catholic bishops of the region, promotes “dialogue instead of evangelization” and an “erroneous conception” of ministerial priesthood.

After noting a lack of access to the sacraments for many people in the region because of a lack of priests, the working document says: “Affirming that celibacy is a gift for the church, it is requested that, for the most remote areas of the region, the possibility of priestly ordination be studied for older people, preferably indigenous, respected and accepted by their community, even if they have an existing and stable family, in order to ensure availability of the sacraments that accompany and sustain the Christian life.”

REPAM, the Pan-Amazonian Church Network, also launched a 40-day prayer initiative in Spanish and Portuguese called “40 dias por el rio” (“40 days by the river”), a series of online prayers, Bible readings and reflections about the environment, evangelization and the Gospel call to assist the poor.

Under the title, “La Tienda de la Casa Comun” (“The tent of our common home”), REPAM will hold conferences, prayer vigils and a full slate of cultural events in Rome during the synod.

The group has planned dozens of events, including a photo exhibit, “The Cry of the Amazon,” which will run Oct. 15-30.

REPAM also will offer public talks by synod members from the Amazon region on topics as diverse as the mining industry and on the witness of martyrs. The group, with partners in Rome, will bring more than 50 indigenous leaders to the city “to guide and animate moments of spirituality, discussions and roundtables” and to talk about the challenges their people face and their vision of ecology and the future.

Another side event is being sponsored by Voices of Faith, an international initiative promoting the voice of women in church leadership and ministry. The group will sponsor a news conference Oct. 1 to discuss ongoing efforts to give women religious the same voting right religious brothers have had at recent synods.

The lay group Voice of the Family, formed to express concern about some of the topics being discussed at the 2014 and 2015 sessions of the Synod of Bishops on the Family, will return to Rome for a “roundtable on the eve of the Pan-Amazon Synod.”

“The vision of civic society in these synods seems to aspire to a Marxist-inspired model promoting an egalitarian and ecologically minded society — a vision which draws its spiritual foundation from Pope Francis’ encyclical Laudato Si’, proposing that care for ‘our common home’ be at the heart of our religious and moral life,” according to the group’s website.

Also, citing the synod working document’s request for a discussion of ordaining older, married community leaders, Voice of the Family said, “An attack on priesthood is also an attack on the family and vice versa.”

NEXT: Amazon inhabitants hope synod will address lack of priests