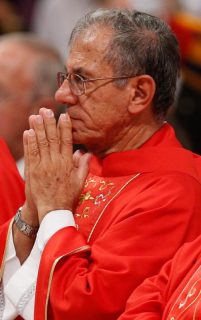 VATICAN CITY (CNS) — With one of the most important Marian feasts in Cuba falling just one week after it was announced Sept. 1 that he would be made a cardinal, Cardinal-designate Juan Garcia Rodriguez said he took the news as a sign of Mary’s maternal love.

The 71-year-old archbishop of Havana, whose full name is Juan de la Caridad Garcia Rodriguez, was referring to Cuba’s patroness, “la Virgen de la Caridad” — Our Lady of Charity — whose feast is celebrated Sept. 8, the feast of the birth of Mary.

“Thanks be to God and Pope Francis” for looking upon the church in Cuba, which has spent the past five centuries praising God, proclaiming the Gospel, teaching the faith and doing works of charity, he told Vatican News Sept. 4.

He said he learned “with surprise, shock and fear” that he had been named a cardinal from Father Ariel Suarez, rector of the minor Basilica of Our Lady of Charity in Havana.

After a few seconds of not believing what the priest had told him, the cardinal-designate said he then took the news “as a sign of the Virgin’s maternal affection” for the people of Cuba, since the news came in the midst of preparations and prayers for her feast day.

He will receive his red hat in a consistory Oct. 5 at the Vatican.

The Cuban bishops’ conference, which he headed from 2007 to 2010, expressed its “great joy” with the announcement.

In a Sept. 1 statement, the bishops called him a passionate missionary whose life and ministry were modeled on Jesus Christ; they highlighted his humble nature and unassuming closeness to the people, whom he concretely helped, especially in times of great need.

He was among the Cuban church officials who worked to help hundreds of thousands of Cubans who lost their homes and belongings during one of the worst natural disasters in the country’s recent history — Hurricane Ike in September 2008.

He was on the scene loading up sacks of beans, rice and “guayaba” paste, a popular type of fruit jam, to take to the people of the province of Pinar del Rio, which had been hard hit by the hurricane.

The native of Camaguey has worked quietly to help rebuild the Cuban church, both physically and spiritually.

Known for his missionary spirit, he found ways to help catechize Cuba after nearly 50 years when religious practice was discouraged by the communist government.

Funding from U.S. Catholics helped support projects throughout Cuba, including work by Cardinal -designate Garcia, who enlisted grandparents — who grew up at a time when they were taught about the church — to help educate their grandchildren about the faith.

As president of Cuba’s bishop conference, then-Archbishop Garcia asked Pope Benedict XVI in 2008 to visit Cuba in 2012; the now-retired pope made the visit to help celebrate the 400th anniversary of Cuban devotion to Our Lady of Charity.

Then-Archbishop Garcia said the Cuban bishops wanted Pope Benedict to witness “our healthy pride in the people who have remained faithful to Christ and his church throughout the long years in which they were criticized” for believing.

Born in Camaguey July 11, 1948, he was one of the first group of priests able to complete all his studies for the priesthood on Cuban soil. He was ordained in his home archdiocese in 1972, and he served in a number of parishes there. He was also the founder and director of a school for missionaries in the archdiocese.

He was appointed auxiliary bishop of Camaguey in 1997 and was elevated to archbishop in 2002. In addition to serving one term as conference president, he represented Cuba in the meeting of Latin American and Caribbean bishops in Aparecida, Brazil, in 2007, and at the Synod of Bishops on the Family in 2014.

Pope Francis appointed him to be the archbishop of Havana in 2016.