Vatican calls for electoral reform, negotiations to resume in Nicaragua 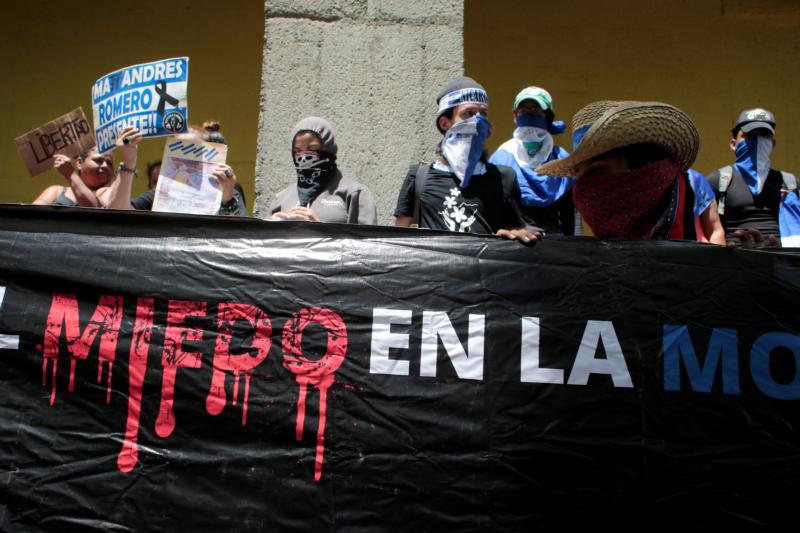 Demonstrators take part in a protest against Nicaraguan President Daniel Ortega’s government Sept. 9, 2019, in Managua. With increasing concerns worldwide about human rights violations in Nicaragua, a Vatican representative has called for an immediate return to negotiations and a rollout of reforms necessary to hold “free and transparent elections” there. (CNS photo/Oswaldo Rivas, Reuters)

GENEVA (CNS) — With increasing concerns worldwide about human rights violations in Nicaragua, a Vatican representative has called for an immediate return to negotiations and a rollout of reforms necessary to hold “free and transparent elections” there.

“The Holy See has been following with great attention the sociopolitical situation in Nicaragua and believes that the unsettled disputes should be solved as soon as possible,” said Archbishop Ivan Jurkovic, the Vatican observer to U.N. agencies in Geneva.

The Vatican recommended that all “political and social stakeholders” come together in a “renewed spirit of responsibility and reconciliation” in order to find a solution “that respects the truth, reestablishes justice and promotes the common good,” he said in a speech Sept. 10 during a session of the U.N. Human Rights Council on the situation in Nicaragua.

“The Holy See strongly believes that it is essential to implement the agreements reached last March, to return immediately to open and mutually respectful negotiations and to realize, at the earliest, the electoral reforms for the holding of free and transparent elections with the presence of international observers,” he said.

A major human rights crisis was triggered after police forces and pro-government groups cracked down on nationwide protests that began in April 2018 against a series of reforms mandated by President Daniel Ortega.

Some human rights groups have estimated the resulting violence led to the deaths of at least 300 people, the wounding of more than 2,000 people and the detention of hundreds more, who have been reportedly subjected to serious abuses such as torture and the denial of due process.

Even after major protests died down, human rights violations continued, according to the high commissioner’s report, with the government banning public demonstrations by groups critical of the government and with the excessive use of force by police in ways that infringed on the freedom of expression and association.

The report said a number of nongovernmental organizations have lost their legal status, international monitors have been expelled, and media outlets have been shut down and journalists prosecuted under a new anti-terrorism law.

The government has also blocked the entry of medicine and food aid from Caritas the past year, a move the Nicaraguan bishops’ conference has called an act of “irrational authoritarianism.”

“We cannot remain in total silence, we cannot be silent,” said Bishop Juan Mata Guevara of Esteli, Nicaragua, speaking on behalf of the bishops’ conference.

Caritas Nicaragua and other diocesan aid programs help the poorest and are in no way connected to commercial or business activity, Bishop Mata told Fides, the news agency of the Congregation for the Evangelization of Peoples, Sept. 9.

Instead, the government controls every request by Caritas Nicaragua “in an exaggerated manner” of excessive bureaucracy, resulting in the aid, sent mostly by the U.S., Germany and Canada, never making it into the country.

“This way of proceeding is an exercise of irrational authoritarianism,” he said, adding, “This reflects how the regime does not see the needs of those who suffer.”