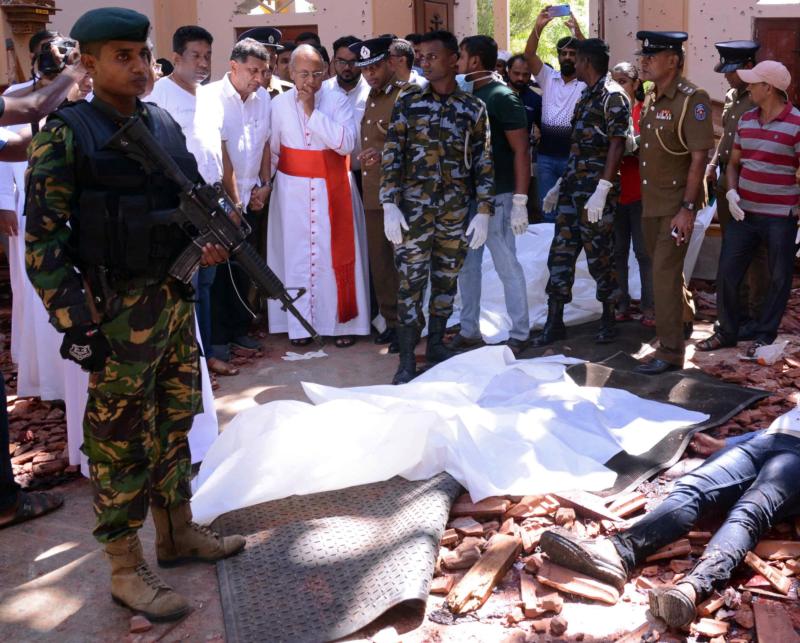 Cardinal Malcolm Ranjith of Colombo, Sri Lanka, looks at the explosion site inside a church in Negombo April 21, 2019, following a string of suicide bomb attacks on churches and luxury hotels across the island. Cardinal Ranjith has finally won a concession from Sri Lanka’s government after widespread criticism of the investigation into the deadly attacks. (CNS photo/Reuters)

Prime Minister Ranil Wickremesinghe announced Sept. 6 that a new independent commission would be appointed as a direct result of the cardinal’s plea, reported ucanews.com.

Cardinal Ranjith, president of the Sri Lankan bishops’ conference, had appealed for such a commission to bring impartiality and progress to the police investigation, ucanews.com reported. The bishops had urged the government to treat their demand as a matter of the utmost urgency.

A nine-person group of suicide bombers affiliated with local Islamist extremist group National Thowheed Jamath blasted three churches and three luxury hotels April 21, killing 259 people, including 37 foreign nationals, and wounding at least 500. Many Christians have been too scared to attend church since the attacks.

Cardinal Ranjith insisted he would not give up his efforts to find out the culprits behind the attacks.

President’s Counsel Shamil Perera, appearing on the cardinal’s behalf, told the Supreme Court Sept. 4 that if intelligence information had been disseminated before the attack, church officials could have canceled the ill-fated Easter services. Perera told the court that fundamental freedoms had been violated by the failure to act on essential information.

Ruwan Gunasekara, police spokesman, nevertheless insisted they had been making progress and revealed that 293 people had been arrested.

“There are 178 held on detention orders and a further 115 suspects have been remanded in custody,” he said.

NEXT: Vatican calls for electoral reform, negotiations to resume in Nicaragua