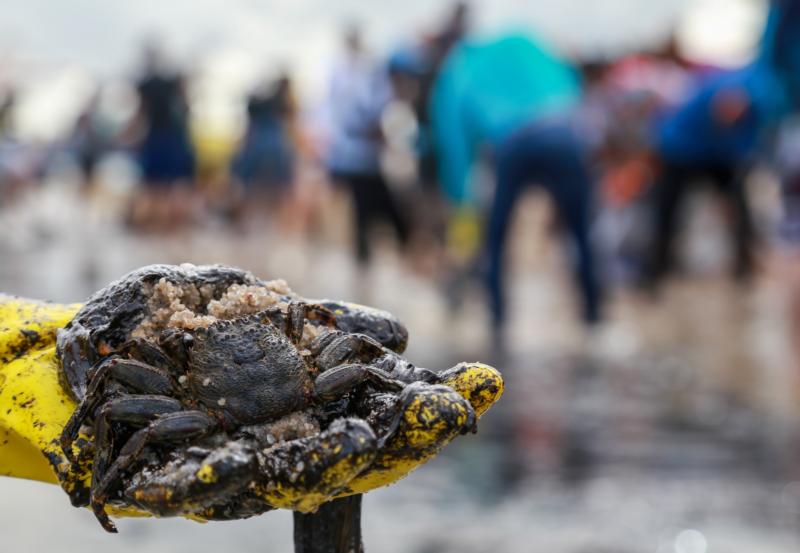 A man in Cabo de Santo Agostinnho, Brazil, shows a crab covered in oil Oct. 20, 2019, as he and others work to clean the site of an oil spill. Proposals made by small groups at the Synod of Bishops for the Amazon involve the Catholic Church’s role in helping indigenous communities confront issues such as ecology, violence and migration. (CNS photo/Diego Nigro, Reuters)

VATICAN CITY (CNS) — Proposals made by the small groups at the Synod of Bishops for the Amazon not only involved theological matters but also the Catholic Church’s role in helping indigenous communities confront issues such as ecology, violence and migration.

The church must continue to reaffirm the rights of indigenous people to their “land, culture, language, history identity and spirituality” as well as “defend their rights to prior, free and informed consent to projects in their territories,” the Italian-A group said in its report.

“Indigenous people, people of African descent, fishermen, migrants and other traditional communities in the Amazon are threatened like never before and are often divided or strategically weakened by the seductions of money and power,” the group said.

The 12 small-group reports, published by the Vatican Oct. 18, were the result of reflections in groups organized by language; each group summarized its members’ conclusions and offered proposals for the whole synod.

Several groups made proposals that call on the church to take a more active role in protecting the environment, both in awakening the public conscience through “ecological conversion” as well as through practical and concrete measures.

“An ecological conversion to a sober life is indispensable, which implies changes in mentality, in lifestyle, in modes of production, in practices of accumulation, consumption and waste. We already know that ‘later, it will be too late!'” the Portuguese-B group said.

The Portuguese-C group said that to be a “visible and credible witnesses of ecological conversion” means that the church must also be ecologically conscience in practical actions such as recycling and eliminating the use of plastic.

The Spanish-E group highlighted the importance of ensuring that the “fruits of the Amazonian synod become a reality” and called for the establishment of a “postsynod ecclesial organization” under the auspices of the Latin American bishops’ council, also known as CELAM for its acronym in Spanish.

This organization, the group said, will lead the charge in “new ways of evangelization and integral ecology” in the region.

Another issue affecting indigenous populations in the Amazon is violence, particularly against women and young people, who “suffer the most due to a ‘macho’ culture, that includes authoritarian behavior and clericalism, as well as abuses and trafficking,” the Italian-A group said.

Such violence, the group said, “demands a greater prophetic denunciation by the church” as well as “a culture of dialogue and encounter” that works for a peaceful resolution of conflicts.

Violence and the abuse of poor or vulnerable people is seen particularly among migrants, especially young migrants who fall for the “deceitful enchantment of urbanization and propaganda,” one group said.

“Many of them are trapped by drug trafficking and organized crime and see their human rights systematically disrespected,” the group identified as Spanish-C said. “Indigenous people, women and children are the ones who suffer the worst and most heartbreaking experiences of abuse.”

The Spanish-D group also noted that migration, particularly among indigenous people, has not only contributed to the “disintegration of the family,” but also “the loss of cultural identity, social marginalization, rejection by people in cities where they arrive as foreigners, they are exploited and fall into violent or criminal organizations, prostitution, etc.”

The group proposed that local churches work with their respective governments to establish and develop projects aimed at addressing “the needs of the communities.”

“Both indigenous and rural territories, as well as cities, suffer a permanent pressure to which we must be attentive to and ready to act as a church — especially at the borders — to define the type of service we can give,” the group said.

NEXT: From sidewalk to swamp, wonders of creation abound