No room for laughter (or hope) in ‘Joker’ 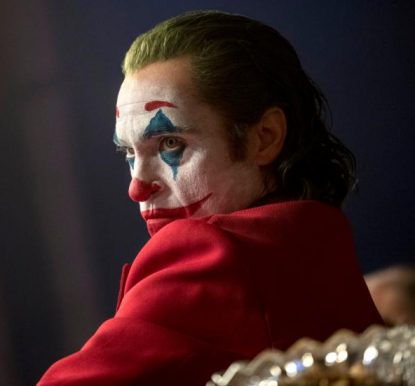 Portrayals of Batman’s archnemesis have spiraled in that direction for years. This time, director Todd Phillips and screenwriter Scott Silver turn the cackling maniac into a warped homage to Travis Bickle, the violent antihero in 1976’s “Taxi Driver,” and a bit of frustrated standup comic Rupert Pupkin in 1983’s “The King of Comedy.”

To drive home the point, Robert De Niro, who played both roles, has a cameo as talk show host Murray Franklin, whom Arthur Fleck (Joaquin Phoenix) — aka Joker — regards as a sort of father figure whose approval he craves.

It’s a familiar and unappealing narrative with no sense of moral uplift. Fleck is both a failed party clown and a failed comedian, battered by poverty, mental illness (his uncontrollable cackle is shown as a form of Tourette’s syndrome), a raft of medications that seem to have no effect, an inability to find a woman who will love him, and a mentally unstable, delusional mother, Penny (Frances Conroy), with whom he shares a decrepit apartment.

The era in the fictional Gotham City is easily recognized as late-1970s New York, when basic municipal services were stretched to their limits, trash piled up on curbs, and the subways harbored violence.

“The worst part of mental illness,” Fleck writes in his diary, “is people expect you to behave as if you don’t.”

In another passage he repeatedly turns to, he’s written, “I just hope my death makes more cents (sic) than my life.”

Penny has led Arthur to believe that his real father is uber-rich Thomas Wayne (Brett Cullen), who has failed to support them in their many troubles.

Wayne is portrayed as an arrogant Donald Trump-like figure who decides to run for mayor because, he says of the city’s downtrodden, “They may not realize it, but I’m their only hope.” He is, of course, the father of young Bruce Wayne (Dante Pereira-Olson), the future crime-fighting Batman.

With steep budget cuts closing the social services office that supplied his medications, the truth of Fleck’s life slowly weighs down on him until his rage emerges in a triple shooting redolent of Bernard Goetz, the “subway vigilante” of 1984. This gives Fleck a sort of demented tabloid fame as a killer in whiteface clown makeup, and as his frustrations mount, so do his murders.

The general idea is for the audience to feel empathy for a troubled loner with none, and whose moral sense has wasted away in the face of hardship.

Fleck is a serial murderer, but equipped only with a revolver another clown had given to him for self-defense. He’s not a mass murderer with an assault rifle. He seeks only to right the wrongs done to himself.

As well-constructed and sharply paced as the film is, it’s just another story of a very sad, compassionless clown who escapes justice at every turn.