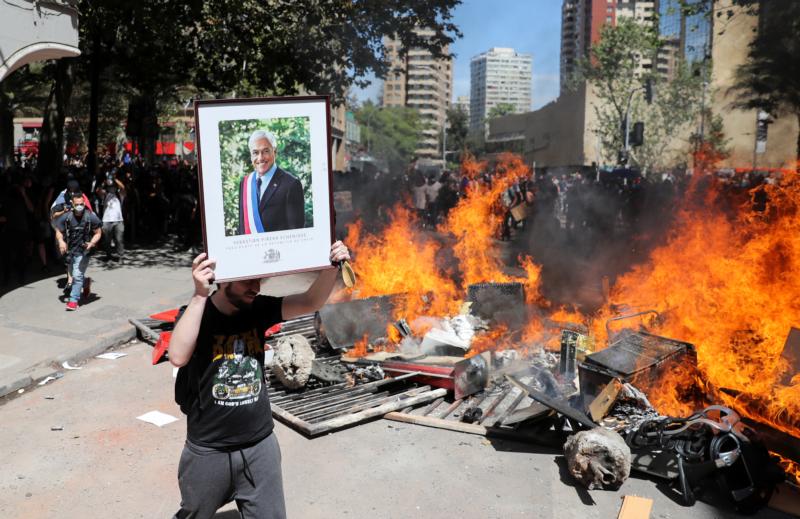 UPDATED – SANTIAGO, Chile (CNS) — Chileans must work together to address the causes of violent protests, which were followed by a police crackdown and have left at least 11 people dead in Santiago, the country’s bishops said.

The demonstrations came after the government announced a 10% increase in electricity rates and a transit fare hike equivalent to about $0.04. Though apparently small, the fare increase triggered a reaction to growing inequality, analysts said.

The “traumatic” events are an “imperious call to continue creating a culture of understanding,” in which people can “empathize with the everyday suffering and ills of Chilean society,” the bishops wrote in a statement dated Oct. 19.

That suffering, they said, is related to shortcomings in employment, health care, public safety, education, housing, pensions, poverty, immigration policies and other issues.

Pope Francis called for dialogue to address the crisis and its root causes.

Speaking at the end of his general audience at the Vatican Oct. 23, the pope said he had been following the situation in Chile with concern.

He said it was his hope that now that the “violent protests have ended, efforts be made through dialogue to find solutions to the crisis and to face the difficulties that generated it for the good of their entire population.”

Conflicts have erupted in the past over the cost of education, and private pension funds mandated several decades ago have failed to deliver as promised. The gap between rich and poor, crime, the rising cost of living in a country where two-thirds of the population earns less than $770 a month, and corruption scandals involving the police and military have worn people’s patience thin, analysts said.

Chilean leaders, the bishops wrote, have an obligation to “understand the deep dissatisfaction of people and families that are affected by unjust inequalities, arbitrary decisions that affect their daily lives, and everyday practices that they consider abusive,” and which disproportionately affect those who are most vulnerable.

Although they condemned the violence, the bishops said it is important to understand its roots and “work with urgency to prevent it, stop it and create peaceful ways of taking charge of conflicts.”

The bishops urged Chileans to “avoid physical and verbal violence” and seek the common good, but they noted that government officials had a particular responsibility to “serve their country, protect those who live there and work to create conditions for a well-being based on justice and peace.”

They said it is important to understand how Chilean society has changed over time and respond to the “complex and new realities that characterize today’s society.”

Before closing with a prayer for “mutual understanding,” the bishops called for “authorities, political parties, civil society and its organizations, universities and intellectuals” to “dialogue about the country we want,” and to build a society in which everyone feels they belong and which inspires people to safeguard the common good.

PREVIOUS: They come at night: Syrians flee to Iraq as cease-fire set to expire

NEXT: Vatican confirms election of Msgr. Peter Vaccari to be president of CNEWA