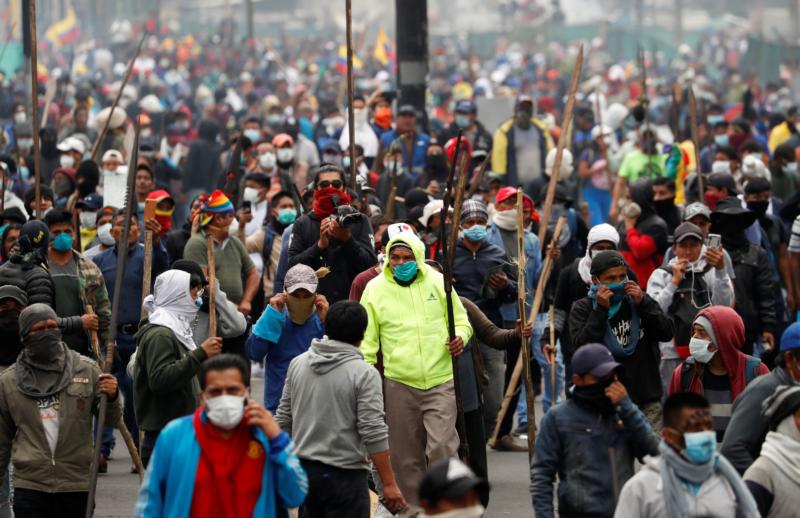 Demonstrators hold spears as they take part in a protest against Ecuadorian President Lenin Moreno’s austerity measures in Quito, Ecuador, Oct.1, 2019. Ecuadorian observers at the Synod of Bishops for the Amazon at the Vatican are keeping an eye on massive protests that have claimed the lives of at least five people in their country. (CNS photo/Carlos Garcia Rawlins, Reuters)

ROME (CNS) — Ecuadorian President Lenin Moreno met with indigenous leaders and agreed to roll back austerity measures that had sparked 10 days of protests.

The Catholic Church and the United Nations worked together to bring the parties to the negotiating table, according to a statement posted on the website of the Ecuadorian bishops’ conference.

The announcement came hours after Pope Francis, at his Oct. 13 Angelus prayer, urged Ecuadorians to “seek social peace, especially for the most vulnerable and the poor.”

He said he and the bishops meeting in the Synod of Bishops for the Amazon were following the events in Ecuador “with concern” and were “united with (Ecuadorians) in sorrow” for people killed and injured in the protests and those who are still missing.

Moreno agreed to rescind a decree he had announced the night of Oct. 2, which eliminated a $1.4 million annual fuel subsidy as part of a multibillion-dollar loan deal with the International Monetary Fund. Government officials said the cheap fuel had benefited criminal groups operating a lucrative cross-border trade in contraband gasoline to Peru and Colombia.

After the subsidy was eliminated, however, diesel fuel prices nationwide more than doubled, and gasoline prices rose by about 30 percent. The sudden increase in transportation costs was expected to increase the costs of other products.

In a statement Oct. 9, Ecuador’s bishops called on the those involved “to keep working toward a final agreement that makes possible a return to calm and the strengthening of democracy.” Bishops from Peru, Venezuela, Colombia, Bolivia and Brazil who are participating in the synod added their support Oct. 12 in a letter to the president of the Ecuadorian bishops’ conference.

Ecuador’s economy depends heavily on oil exports, but revenues have fallen in recent years because of lower prices on the international market, leaving the country with mounting debt.

Diesel fuel prices more than doubled overnight, and gasoline prices rose by about 30 percent. The sudden increase in transportation costs is expected to increase the costs of other products.

The president declared a state of emergency Oct. 4, moved the government from the capital of Quito to the coastal city of Guayaquil, and imposed a curfew, but protests by transportation workers, young people, unions and indigenous organizations continued.

In a statement issued Oct. 9, Ecuador’s bishops called on the those involved “to keep working toward a final agreement that makes possible a return to calm and the strengthening of democracy.” They added their prayers “for reaching common ground that returns peace to our nation and for progress in the quest for sustainable justice for life and human dignity.”

Besides anger over fuel prices, the protests reflect frustration that has been bottled up for the past few years, as Ecuadorians have seen successive governments break promises to improve economic conditions, said Capuchin Brother Txarly Azcona, who works in Puyo, in Ecuador’s central Amazon region.

Many Ecuadorians lack stable employment, he said, “so when prices go up, how are people supposed to support themselves?”

Cesar Licuy, an indigenous catechist from Sucumbios province, called the lifting of the fuel subsidy unjust.

The move “only benefits those in power. It does not benefit indigenous people,” he told CNS.

The Amazon is the source of the country’s petroleum, but the region’s people receive no recognition from the government, he said after the Oct. 11 morning session of synod discussions.

Licuy said he hoped the synod would result in a call for an end to oil drilling, mining and indiscriminate logging in Ecuador. Stripping the mountains of trees, he said, robs indigenous communities of the water and clean air they need to survive.

Destruction of Amazonian ecosystem has been one of the priority issues at the synod. Ecuador’s indigenous organizations are calling for an end to oil drilling, as well as to the large-scale mining that has begun in Ecuador in recent years. Government officials say mining is necessary to increase revenue, especially since the drop in oil prices.

“The poorest people are demanding a decent life” and a country that “reflects the dreams and the hopes of all Ecuadorians,” he said. “It is the responsibility for all of us to build a country that’s inclusive, where the rights and identities of indigenous peoples are respected.”

NEXT: Syriac Catholic patriarch pleads for peace in northeastern Syria