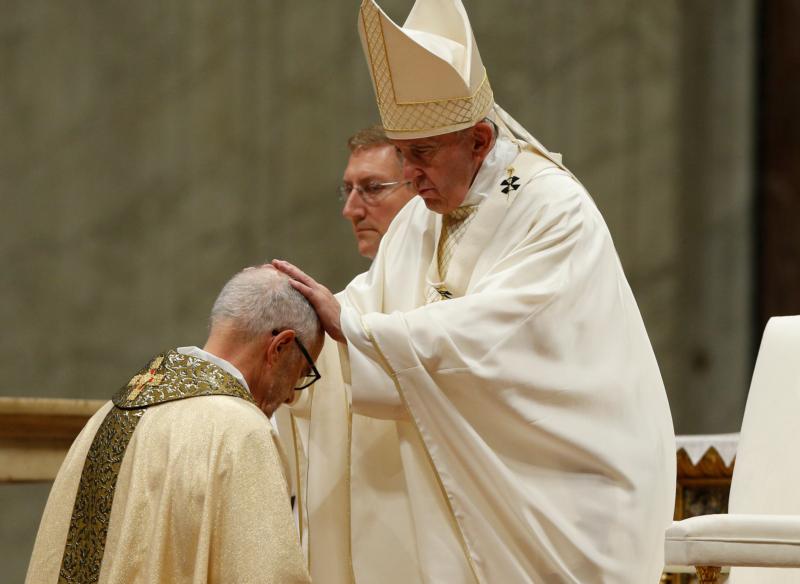 VATICAN CITY (CNS) — Ordaining four new bishops, Pope Francis reminded them that a bishop is first and foremost an apostle, not an administrator who doles out dull discourses.

“Proclaim the true word, not boring speeches that no one understands. Proclaim the word of God,” the pope said in his homily Oct. 4 at the Mass in St. Peter’s Basilica.

“Remember that according to Peter, in the Acts (of the Apostles), the two principal tasks of the bishop are prayer and proclaiming the word. Then the other administrative (tasks), but these two are the backbone,” he said.

The pope presided over the Oct. 4 ordination Mass of the new bishops, including Canadian Cardinal-designate Michael Czerny, who will be created a cardinal at the Oct. 5 consistory.

Since church law requires that only an ordained bishop can receive a red hat, Cardinal-designate Czerny was assigned as bishop of the “titular” diocese of Beneventum, a defunct diocese in what is now Tunisia. He will hold the title for 24 hours; once he becomes a cardinal, he will have a titular church in Rome.

The three other candidates ordained were archbishops: Italian Paolo Borgia, an official at the Vatican Secretariat of State; Maltese Antoine Camilleri, Vatican deputy foreign minister; and Italian Paolo Rudelli, who has served as the Vatican’s representative to the Council of Europe.

During the Mass, Vatican firefighters evacuated people seated in the north transept of the basilica. However, the Mass continued as normal.

A guard at the basilica told Catholic News Service a very small piece from the ceiling, described as a “cartone” (canvas) fell. He said firefighters evacuated people as a precautionary measure.

Pope Francis anointed each new bishop with oil and gave them each the signs of their ministry: a ring that represents faithfulness to Christ’s church, the miter that reminds them of their call to holiness and the crosier as a sign of their ministry as shepherd.

As is customary, the pope used the homily prescribed for the occasion by the Italian bishops’ conference, but he also added a few personal words of advice to the new bishops.

The pope reminded the four prelates that, as bishops, they have been entrusted the be “faithful guardians and dispensers of the mysteries of Christ.”

Bishops, he said, are called to follow the “example of the Good Shepherd, who knows his sheep, who is known to them and who did not hesitate to give his life to them.”

Speaking off-the-cuff, the pope also reminded them of the threefold task “of closeness” of bishops: closeness to God in prayer, closeness to priests and closeness with the people of God.

“Do not forget that you have been taken, chosen from the flock. Do not forget your roots, of those who have transmitted the faith to you, who have given you your identity. Do not reject the people of God,” he said.