Guatemalan prelate says his remarks are based on what he experiences 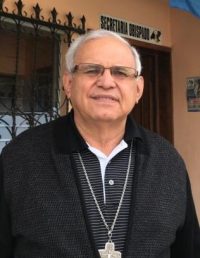 HUEHUETENANGO, Guatemala (CNS) — Cardinal-designate Alvaro Ramazzini Imeri offered prayers for Central American migrants Sept. 29, while celebrating Mass on World Day for Migrants and Refugees in this downtrodden Guatemalan department, epicenter of an ongoing outflow of migrants toward the United States.

He prayed for the migrants transiting Mexico, the migrants living without the proper papers in the United States and for the many deportees who find few economic opportunities after returning to rural Guatemala. He also prayed “that there’s a change of heart” with the U.S. president and with his policies toward migrants, which he called ” inhumane.”

Cardinal-designate Ramazzini, who will join the College of Cardinals Oct. 5, has found unexpected fame, especially at home, for denouncing injustices in oft-forgotten corners of Guatemala. His homilies, public statements and protests against the excesses of foreign mining companies received national and international attention, but have brought accusations of being a communist, along with death threats.

As a cardinal, his voice is expected reach even further in this highly centralized country, even though he will remain in Huehuetenango, an impoverished pocket of the country populated by indigenous Maya peoples and very much on the periphery of Guatemalan society.

Cardinal-designate Ramazzini cited his elevation as another example of Pope Francis putting the periphery at the center, saying, “(People) think being archbishop of Guatemala City is more important than (being bishop) of Huehuetenango. But it’s not like that.”

He added, “I think the pope is trying to change the idea that being a cardinal is something that gives you power and prestige.”

Cardinal-designate Ramazzini, 72, travels winding roads to coffee- and corn-farming villages hidden in the hills of Huehuetenango, a department, or state, of roughly 1.7 million people on the border with Mexico.

His travels inform his opinions, he says, including when he hears stories, such an anecdote he shared at Mass. He said a farmer whose son was recently deported was returning with debts of $9,500 owed to a coyote, or smuggler.

“What I say is based on what I experience,” he said in an interview at his parish office in Huehuetenango. “What I experience is being in very poor communities, communities migrating to the United States, with scandalous levels of child malnutrition.

“What I experience is a reality in which I see people’s fundamental rights not being respected: the right to nutrition, the right to a dignified life, the right to well-paid work. … I cannot stop speaking out on that because it is what I am experiencing.”

He cited poverty numbers: 70 percent of people in Huehuetenango are considered poor, while 22 percent live in extreme poverty. Migration is often people’s only option, although he attributed a surge of outward migration in recent years to coyotes spreading the idea that children arriving at the U.S. border will be allowed passage. It’s an easy sell, he said.

“The underlying reason continues being poverty and the need to work. There are no jobs or poorly paid jobs,” he said. “(Also) many people started going to the United States and resolving their economic problems. The proof of this is the increase in remittances each year.”

The bishop will become a cardinal as the Catholic Church in Central America is losing followers to evangelical congregations.

Migration is surging, even as Guatemala acquiesced to U.S. pressure and signed a safe third country agreement. The ruling elites — who have attacked the cardinal-designate as a communist — forced out an international anti-impunity commission known as the CICIG, which put many of them under scrutiny. Rural Guatemala continues suffering abandonment, too.

“The current government really hasn’t focused on solving the chronic structural problems of this country. The previous government didn’t do it either,” Cardinal-designate Ramazzini said.

His critics have spoken against his elevation and even started a petition calling for Pope Francis to reverse his decision. But the Guatemalan prelate has heard criticism throughout his 30 years as a bishop and appears unfazed.

“The only thing I can say is: I try to be a faithful follower of the Gospel and the Lord Jesus Christ and church social doctrine,” he said. “These are the points that guide my decisions on social matters.”

Cardinal-designate Ramazzini never set out to be so outspoken. He was born in Guatemala City, studied canon law in Rome and served as seminary rector. St. John Paul II named him bishop of San Marcos in western Guatemala in December 1988. By his own confession, he was ” ignorant” to the Guatemalan reality, having lived in the capital and ” visited a marginalized area once.”

But arriving in San Marcos “changed my life,” he said. The cardinal-designate remembered seeing “a whole family die of measles … seeing people in villages who ate once a day, seeing the distances people walked to take a sick person (for help,) seeing people work on coffee farms as if they weren’t people.”

He later took on a Canadian mining company, Goldcorp, telling Catholic News Service in 2008 that the company was “earning millions and millions of dollars, and none of it is helping the people of San Marcos.”

As he moves into a higher-profile church position, Cardinal-designate Ramazzini said he had no plans to change his pastoral approach or stop speaking out.

“I’m 72,” he said. “If during my entire life I’ve maintained these positions, in the final years, I’m not going to abandon them.”