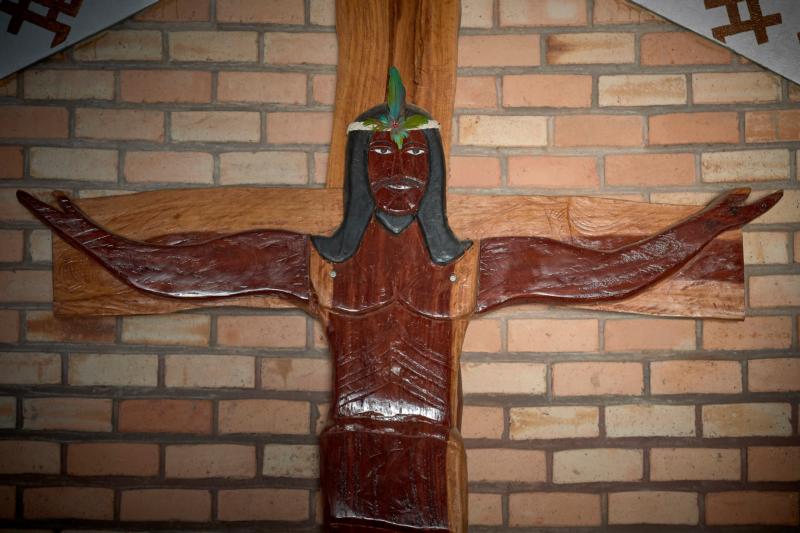 Amerindian Christ is seen in the sanctuary of the Catholic Church in St. Ignatius Village outside Lethem, Guyana. It was carved by Lloyd Fredericks, a carpenter in the nearby village of Shulinab. (CNS photo/Paul Jeffrey)

VATICAN CITY (CNS) — Proposals at the Synod of Bishops for the Amazon for indigenous- or Amazonian-rite ceremonies are meant to enhance and enrich the liturgy with cultural signs and gestures, not change what is essential for Catholics, a bishop said.

Spanish-born Bishop Rafael Escudero Lopez-Brea of Moyobamba, Peru, said Catholics are not asking for a new “liturgical rite,” but want to maintain the essential elements “received by the Lord and the apostles in the Eucharist” while introducing cultural elements.

“When we speak of this possibility, it means to introduce some symbols into the Eucharist, some rites that do not affect what is essential in the Eucharist because if not, we would ruin the sacrament and go against that revelation,” Bishop Escudero told journalists Oct. 15.

During that morning’s session of the synod, several participants addressed the theme of inculturation which, according to a Vatican News summary, would “open the church to discover new paths within the rich diversity of Amazonian culture.”

At a briefing at the Vatican press office, Bishop Escudero said the idea of incorporating local traditions and cultural elements in the liturgy is not new, offering the examples of the Eastern Catholic churches and of Latin-rite Masses in Africa.

“If we study church history, we can see that before everything was unified under the Roman rite, a multiplicity of different rites existed according to the area,” he said.

Italian-born Bishop Eugenio Coter of Pando, Bolivia, explained that certain symbols and gestures used in the Latin rite can have entirely different meanings depending on the country or culture.

“A bishop told me that a change was asked for the liturgy in Japan because the gesture of beating one’s chest is a gesture of pride, of affirmation, as if saying ‘I matter,’ and placing it during the ‘Confiteor’ (‘I confess’) has an entirely different meaning. An adaptation must be made,” Bishop Coter said.

Another example, he continued, is that for some indigenous groups in the Amazon, the use of incense, which “is a sign of God’s presence” in the Latin rite, signifies prayers rising to God in heaven.

Thus, he said, in a eucharistic celebration with indigenous Catholics, “incense is used during the prayers of the faithful,” and the person reading the prayer sprinkles the incense to show that “the prayer rises to heaven.”

The Italian bishop said he supported the idea of setting up a commission of experts who can recommend ways to incorporate “the language, signs, gestures, music and local culture of every ethnic group while safeguarding that which the word of God and faith tells us” regarding Christ’s institution of the Eucharist.

“That is why there are structural elements of the Eucharist that have not changed in 2,000 years,” Bishop Coter said. There are other elements, however, “that can be done — through a commission that has studied the issues — in a way that speaks to the people who live it.”

NEXT: Pope: Evangelization must help, not hinder, people getting closer to God