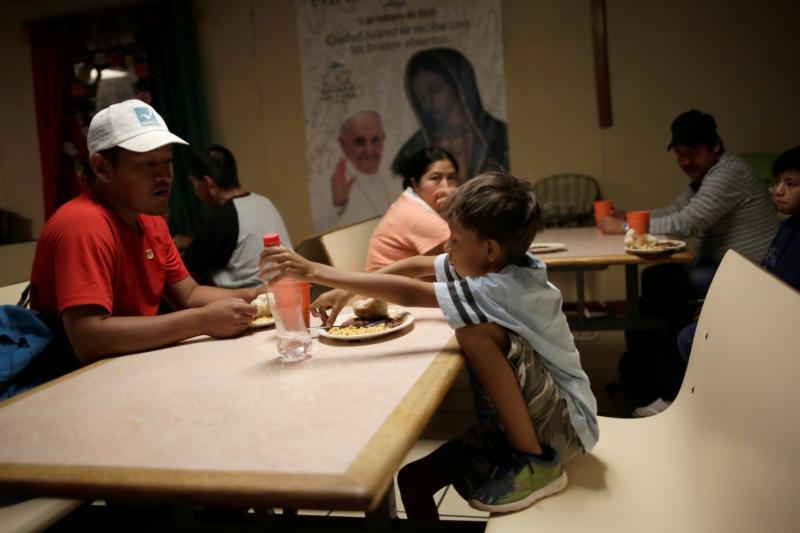 Central American migrants who were returned to Mexico from the U.S. under the Migrant Protection Protocols eat breakfast at a Catholic-run shelter in Ciudad Juarez, Mexico, Sept. 12, 2019. A Mexican priest and migrant shelter operator suffered an extortion attempt and later a violent robbery at his parish residence on the same day. (CNS photo/Jose Luis Gonzalez, Reuters)

GUADALAJARA, Mexico (CNS) — A Mexican priest and migrant shelter operator suffered an extortion attempt and, later the same day, a violent robbery at his parish residence.

It was another example of the violence impacting priests in Mexico and how migrant defenders are coming under attack. The robbery came amid a wave of assaults on parishes — often during Mass — in Mexico’s second-largest city.

In a statement issued Oct. 24, the Migrant and Refugee Shelter in in the Guadalajara suburb of Tlaquepaque said shelter staff received a phone call that day, saying Father Alberto Ruiz Perez had been in an accident. The caller asked that money meant for construction at the shelter be given to an unnamed priest, who would come to collect it.

There was no accident and “when Father Ruiz arrived, (the staff) realized there had been a robbery via false notification.”

Later that night, after finishing duties in his parish, a couple arrived at the parish residence asking for “a religious service.” The male then pushed Father Ruiz, pulled a gun on him, and five other armed individuals stormed the residence, stealing personal items and approximately $1,050, according to the statement.

In recent years, Mexico’s Catholic parishes have become targets for thieves, despite the 83% of the country professing Catholicism, according to the census.

At least 27 priests have been murdered in Mexico since 2012, according to the Catholic Multimedia Center. Church leaders have been unable to find a common thread in the murders of priests, though robbery is sometimes cited as a motive.

The newspaper Milenio reported Oct. 12 that at an armed group in Guadalajara had assaulted four parishes over a two-week period, entering during Mass and demanding attendees turn over their wallets, money and cellphones.

Migrant defenders have also felt vulnerable in recent months as the Mexican government steps up enforcement on the undocumented migrants transiting the country.

The enforcement has led to police and National Guard members to attempt to enter migrant shelters — including some operated by dioceses, parishes and religious — or intimidate migrants in the vicinity of shelters. Mexico’s immigration law of 2011 forbids migration officials to enter shelters without permission.

NEXT: Ukrainian Catholic Church urges victims of abuse to not be silent