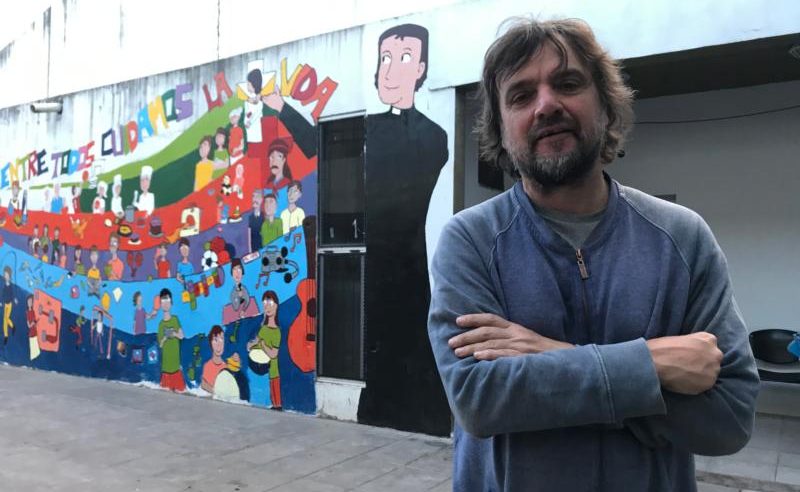 BUENOS AIRES, Argentina (CNS) — Elections in Argentina brought the Peronist political movement back to power as voters in the South American country — home of Pope Francis — expressed anger over an economic crisis that has impoverished millions.

The election of longtime political operative Alberto Fernandez as president surprised few, including the priests at the St. Cajetan shrine, where jobless Argentines have flocked to seek intervention.

“We didn’t need polls. Our polls took place in the confessionals, with the people coming for blessings, coming to the shrines,” said Father Miguel Angel Moreyra, priest at the shrine. “People came angry, with rage, with anger, insulting the president and government, something which is rare to hear.”

With 97% of the votes counted, Fernandez claimed 48.1% support, nearly eight points better than President Mauricio Macri, whose relationship with Pope Francis appeared frigid. Some of Macri’s supporters saw the pope as a political opponent.

During his four years in office, Macri promoted pro-market policies, such as scrapping capital controls and cutting subsidies. But Argentina’s economy has stalled in recent years. Its currency dropped precipitously in 2019, and the annual inflation rate is running at more than 50%.

The Argentine bishops’ conference has urged the government to call a food emergency. The Social Debt Observatory at the Pontifical Catholic University of Argentina says the poverty rate surged from 29% in 2015 to 35% in 2019.

At the St. Cajetan shrine, Father Moreyra said he saw three types of people in 2018, “people looking for work for the first time, people who had been laid off and people who were scared of losing their jobs.” But this year, “We’re hearing requests for work from these people who were fearful because they really did lose their jobs.”

Parishes throughout Argentina have stepped in to serve the needy. St. John Bosco Parish in suburban Jose Leon Suarez offers six meal times to residents of a “villa miseria” — as shanties in the Argentine capital are known.

Father Jose Maria Di Paola, better known as “Padre Pepe,” says the downturn has hit the poor hard as many survived by performing odd jobs as maids, handymen and carpenters for the middle class, who now lack the money to hire help.

Many in the shanties said they planned to vote Peronist, he said, explaining people there remember having a little more money in the wallets and recall a robust recovery from the 2001 crisis, when Argentina defaulted.

“They have expectations and a lot of passion for Cristina,” Father Di Paola said, referring to former President Cristina Fernandez de Kirchner, who led a populist government from 2007 to 2015 and whose late husband, Nestor Kirchner, preceded her in office.

Fernandez de Kirchner — who clashed with then-Archbishop Jorge Mario Bergoglio of Buenos Aires during her presidency, but has since made amends with Pope Francis — was expected to run in 2019, but orchestrated a move in which Alberto Fernandez — no relation — would instead run for president, and she would be his running mate.

She also faces corruption accusations, but will enjoy immunity from prosecution as vice president, something Father Di Paola says shanty dwellers are not worried about.

“People (here) don’t make these analyses,” he said. “They make the analysis that they were doing better with the previous government.”

Daniel Bataglia, an electrician making a pilgrimage to the St. Cajetan shrine, planned to vote Peronist, saying they “always deliver for the people.” Macri, he added, promised “zero poverty,” but in the end “made more poor people.”

“When the ability to finance it with debt is exhausted, generally they start to finance it by printing more money,” which triggers inflation, he said.

“The promise of a future Peronist government is to lower taxes, raise salaries and stop price increases, which is impossible: the three things don’t go together,” said Jose Maria Poirier, editor of the magazine Criterio. “Argentina is a country that is used to spending more than it can.”

Pope Francis loomed over the elections from afar, but did not interfere.

“The pope has a lot influence, and there are bishops and the majority of the clergy who clearly sympathize with Peronism,” said Mariano De Vedia, a political editor and religion writer at the newspaper La Nacion.

The Argentine church has lost influence on moral matters, De Vedia said, but with “poverty and hunger, in this area the church’s word has weight. … (It) has a strong presence in the poorest areas.”

NEXT: Mexican priest who runs migrant shelter attacked in rectory