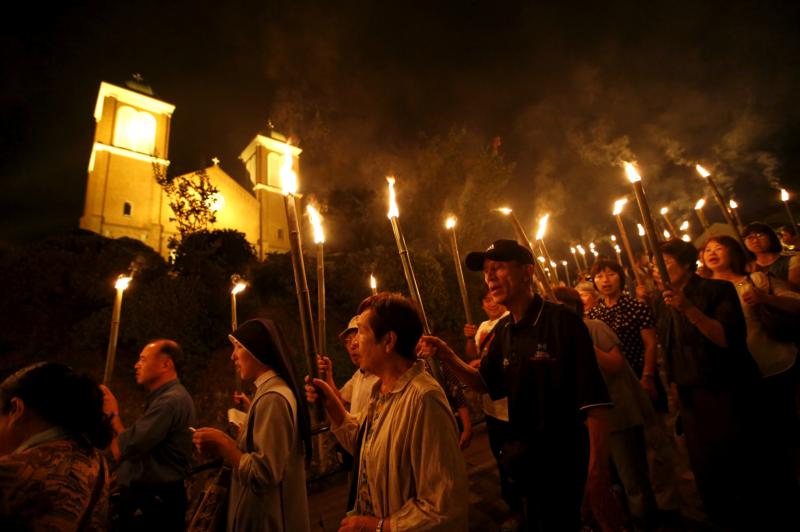 Catholics holding torches leave Urakami Cathedral in Nagasaki, Japan, Aug. 9, 2015, after praying for victims of the 1945 atomic bombing. Pope Francis will finally fulfill his desire to be a missionary to Japan when he visits the country, as well as Thailand, Nov. 20-26, 2019, the Vatican announced Sept. 13. (CNS photo/Toru Hanai, Reuters)

VATICAN CITY (CNS) — After spending most of October at the Vatican working with the Synod of Bishops for the Amazon and dedicating the first two weeks of November to “ad limina” visits with bishops from the United States, Pope Francis will travel to Thailand and Japan in late November.

The Vatican had released Oct. 2 an initial version of the pope’s schedule for the trip Nov. 19-26. The updated schedule adds no new events but provides specific times for most of the activities on the pope’s itinerary.

Here is the updated schedule released by the Vatican Oct. 28, which does not include times for some meetings in Japan. Times listed are local, with Eastern Time in parentheses:

— 10 a.m. (10 p.m. Nov. 20) Visit with the Buddhist supreme patriarch of Thailand at the Wat Ratchabophit temple. Greeting by pope.

— Noon (12 a.m.) Private visit with the patients and people with disabilities. Greeting by pope.

— 11 a.m. (11 p.m. Nov. 21) Meeting with the bishops of Thailand and with members of the Federation of Asian Bishops’ Conferences at the Shrine of Blessed Nicholas Bunkerd Kitbamrung. Speech by pope.

— 3:20 p.m. (3:20 a.m.) Meeting with Christian leaders and the leaders of other religions at Chulalongkorn University. Speech by pope.

— Lunch at the archbishop’s residence.

— Private meeting with Emperor Naruhito at the Imperial Palace.

— Lunch with the papal entourage in the apostolic nunciature.

— Meeting with the prime minister at the Kantei.

— Meeting with government authorities, civic leaders and members of the diplomatic corps at the Kantei. Speech by pope.

— 7:45 a.m. (5:45 p.m. Nov. 25) Private Mass with members of the Society of Jesus in the Kulturheim Chapel of Sophia University, followed by breakfast.