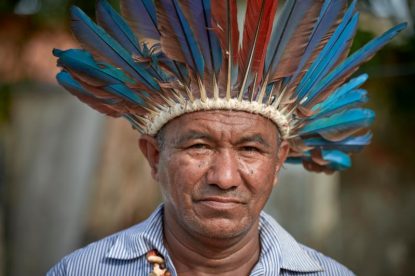 Augusto Miranha, a leader of the “Indigenous Nations” neighborhood in Manaus, Brazil, is pictured in an March 30, 2019, photo. In remarks made Oct. 11, Archbishop Bernardito Auza, the Vatican’s permanent observer to the United Nations, called it welcome news that several nations around the world “have taken active steps to recognize the right to autonomy or self-government of indigenous peoples.” (CNS Photo/Paul Jeffrey)

UNITED NATIONS (CNS) — The Vatican’s nuncio to the United Nations called it welcome news that several nations around the world “have taken active steps to recognize the right to autonomy or self-government of indigenous peoples.”

Such “concrete actions provide a mutually beneficial framework for the engagement between the state government and the indigenous people,” said Archbishop Bernardito Auza, the Vatican’s permanent observer to the United Nations, in remarks Oct. 11.

“They also contribute to the recognition and realization of the rights of indigenous peoples, their extraordinary cultural and spiritual patrimony, and their valuable contribution to broader society and the common good,” he added.

His statement was issued in reaction to a recent report from the “special rapporteur” on the rights of indigenous peoples. His remarks were addressed to the Third Committee of the 74th session of the U.N. General Assembly for its agenda item on the “Rights of Indigenous Peoples.” They were delivered by Msgr. Fredrik Hansen, first secretary at the Vatican’s U.N. permanent observer mission.

Quoting Pope Francis, the archbishop said: “It is essential to show special care for indigenous communities and their cultural traditions. They are not merely one minority among others, but should be the principal dialogue partners, especially when large projects affecting their land are proposed.”

Indigenous peoples are the ones who can “care best for their own patrimonial land and living traditions,” Archbishop Auza said, but in some places they “are under tremendous pressures to sell their ancestral land.”

“Or, in some cases,” he continued, “they are forced by outside interests to abandon their homes without their ‘free, prior and informed consent,’ as called for in the United Nations Declaration of the Rights of Indigenous Peoples.”

Formal recognition of the rights of indigenous peoples to autonomy or self-government “greatly contributes to promoting and pursuing” objectives of this U.N. declaration, Archbishop Auza said.

Noting that 2019 is the International Year of Indigenous Languages, the archbishop also said the preservation of these languages is important not only for the indigenous peoples but also for the cultural heritage of the whole human family.

In declaring the yearlong observance, the U.N. General Assembly resolution called “on the international community to advance efforts ‘to preserve, promote and revitalize’ indigenous languages, so often in danger of extinction,” Archbishop Auza said.

The U.N. Declaration of the Rights of Indigenous Peoples acknowledged, he stated, that “indigenous peoples have the right to revitalize, use, develop and transmit to future generations their histories, languages, oral traditions, philosophies, writing systems and literatures.”

NEXT: Indigenous woman brings message from her elders to pope as church elder