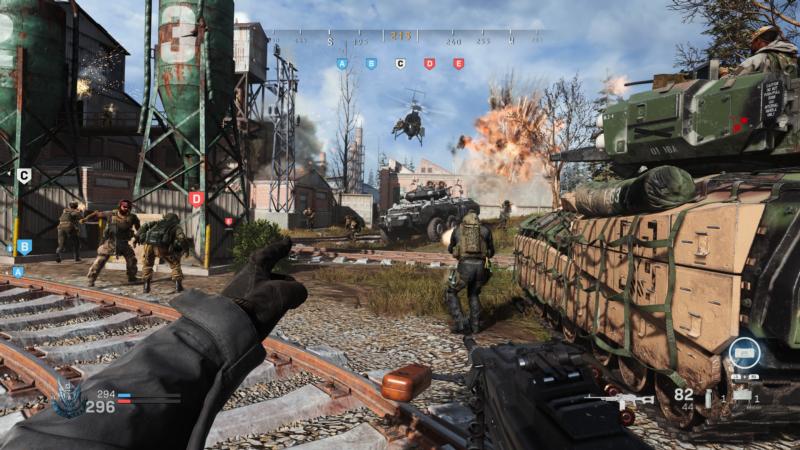 This is a scene in the video game “Call of Duty: Modern Warfare.” (CNS/Activision)

Like other titles in the series, “Call of Duty: Modern Warfare” is a first-person shooter involving graphic scenes of combat. This iteration is loosely based on the Gulf War.

There is no overt sexual content, but there are cartoon images of female nudity. The dialogue, moreover, is loaded with vulgarity. While drug use is not explicit, there are depictions of marijuana leaves on gear, along with the consumption of tobacco and alcohol. Taken together with the fighting, these elements suggest that even many grown-ups may want to seek their entertainment elsewhere.

Players predominantly operate either as a CIA agent or a British SAS (Special Air Service) officer. They’re working together to recover chemical gas stolen by a terrorist group headed for the fictional country of Urzikstan.

Despite the excessive mayhem in “Modern Warfare,” it does well in several areas. The game shines with its exceptionally stunning graphics, which are so beautifully detailed and realistic, it almost feels like a movie.

There are multiple difficulty levels allowing players to adjust gameplay to fit their skills. The mechanics are such that gamers must approach situations with more strategy and thought than in previous titles, where going in guns blazing was an acceptable tactic. This time, enemies aren’t so noticeable and can blend in with innocent civilians.

At the end of every level, players are graded on the choices they made in what is called a threat assessment. This score is based on how many civilians were injured or killed during the mission. Higher scores are gained from fewer civilian deaths — which results in better rewards.

As with many of its predecessors, the campaign isn’t necessarily the biggest draw in “Modern Warfare.” Rather, it’s the multiplayer aspect.

There are several multiplayer options from which to choose, ranging from two vs. two up to a new mode called Ground War, which supports up to 100 players. “Modern Warfare” also contains a new tactical and cooperative Special Ops mode instead of the typical Zombie mode the games have featured in the past.

These options present the possibility of gamers being exposed to unsuitable content by other players.

Within the campaign, players kill other human characters, military or civilian, using rifles, machine guns, grenades, rocket launchers, tanks and more. There are relentless blood effects, along with depictions of torture, executions and mass bombings. Some of the violence can be adjusted in the initial game settings, but most is unavoidable.

In an interview with the Official PlayStation Magazine, Activision’s developers claimed that “Modern Warfare” would address how warfare can be “morally gray.” But they have clearly chosen to make Russia the monster, with no shading about it.

“Modern Warfare” takes liberties with history, pushing a very strong anti-Russian sentiment not by invoking any Russian war crimes, but by rewriting as Russian activities actions carried out by the United States and its allies. This demonization of Russians serves to obscure an awareness of the truth — and hinders important moral self-reflection.

One such incident is on a level called Highway of Death, where players assume the role of a CIA operative. The game states that the Highway of Death resulted from a horrific attack committed by Russian forces decades ago against people fleeing a besieged town in Urzikstan.

In reality, the “Highway of Death” was a U.S.-led attack during the 1991 Gulf War on defeated Iraqi military personnel withdrawing from Kuwait. It probably resulted in hundreds of deaths — some of them among hostages and civilian refugees from Kuwait. Including an altered version of it in a game is, accordingly, both misleading and disrespectful.

Playable on PlayStation 4, Xbox One and Windows PC.

PREVIOUS: ‘Playing With Fire’ ends up all wet