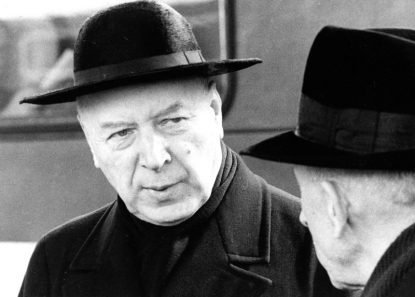 Cardinal Stefan Wyszynski of Poland, pictured in an undated photo, will be declared blessed, a step on the way to sainthood, June 7, 2020, at an open-air Mass in Warsaw. (CNS files)

WARSAW, Poland (CNS) — When plans were announced in October for the beatification of Cardinal Stefan Wyszynski, fresh tributes poured in for the man who steered Poland’s Catholic Church through dark years of communist rule.

The former primate will be declared blessed — a step on the way to sainthood — June 7 at an open-air Mass in Warsaw. While supporters are recalling his personal strength in defending the church against relentless opponents, they also are stressing his sanctity as a figure of prayer and devotion.

“We must see him not just as a statesman who led church and society, like Moses, through the red sea of communism, but also as a fervent believer in God who served people,” said Capuchin Father Gabriel Bartoszewski, vice postulator of the cardinal’s process.

“He was widely admired as a saint at his death, with noble, heroic qualities obvious to those around him,” Father Bartoszewski added.

Born Aug. 3, 1901, in Zuzela, Poland, Stefan Wyszynski was ordained in 1924, serving as a chaplain to Poland’s underground Home Army, the AK, under wartime German occupation.

He was named bishop of Lublin by Pope Pius XII in 1946, becoming the country’s youngest prelate, and was elevated to archbishop of Warsaw-Gniezno two years later.

Raised to cardinal in 1953, three years after signing a controversial “understanding” with the communist regime, he was forcibly prevented from receiving his red hat until 1957.

Cardinal Wyszynski died May 28, 1981, during strikes by the Solidarity movement, and his Warsaw funeral was attended by tens of thousands of Catholics in a show of anti-communist defiance.

Earlier this fall, the president of the Polish bishops’ conference, Archbishop Stanislaw Gadecki of Poznan, said Cardinal Wyszynski had “never held back from proclaiming the Gospel and recalling the truth, even at risk to his freedom and life” during 33 years as Poland’s primate.

Cardinal Kazimierz Nycz of Warsaw told Poland’s Catholic Information Agency, KAI, that Cardinal Wyszynski’s teachings remained a “clear and transparent reference point” for older Poles but could also be seen as “relevant and timeless” at a new time of deep social divisions.

Father Bartoszewski said he thinks “undimmed spirit of resistance and hopefulness” shown during Cardinal Wyszynski’s imprisonment were key to understanding his saintly qualities.

“Despite the hardships inflicted on him, he was still able to greet his guards and those watching him, always maintaining his dignity as a priest and bishop, and practicing the Christian virtues of faith, hope and love,” he told Catholic News Service.

“This courageous testimony enabled him to talk to his persecutors and clarify many things. While the communists went on harassing him, they also relied on his stature and integrity.”

Although allowed to attend the Second Vatican Council from 1962 to 1965, Cardinal Wyszynski was constantly shadowed by Poland’s secret police and monitored by the Soviet Union’s KGB. He criticized Vatican attempts to use diplomacy with Eastern Europe’s regimes and dashed the hopes of some Catholic groups who hoped to modify communism by “working within the system.”

Yet he remained open to patient negotiations and left a detailed record of his thoughts and actions in counseling against militancy and violence at times of unrest.

Following his October 1978 election to the papacy, having weathered communist attempts to sow tensions between them, St John Paul paid tribute to Wyszynski’s faith and endurance “in face of prison and suffering,” telling the primate there would have been “no Polish pope in the see of Peter” without him.

The Vatican in September confirmed a miracle to his intercession: the inexplicable recovery of a dying 19-year-old Polish cancer patient in 1988.

Historian Jan Zaryn told CNS he hoped the June beatification would encourage new interest in Wyszynski among younger Poles, but also offer “important insights” to the church outside Poland on “what it means to be European” and how to “combine openness to others with pride in one’s own inheritance.”