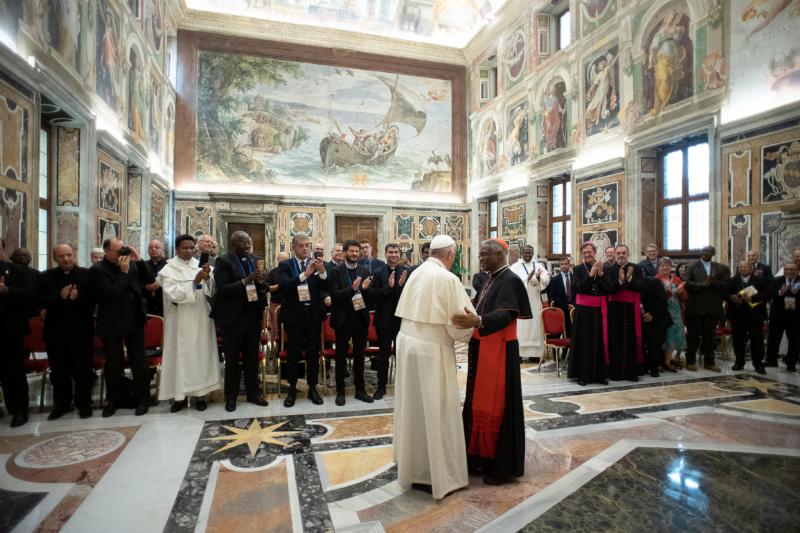 Pope Francis greets Cardinal Peter Turkson, prefect of the Dicastery for Promoting Integral Human Development, at the beginning of a Nov. 8, 2019, meeting of national and regional directors of Catholic prison ministries from around the world. (CNS photo/Vatican Media)

VATICAN CITY (CNS) — Visiting the imprisoned is an act of mercy that has implications for all Christians and not just those involved in prison ministry, Pope Francis said.

Speaking Nov. 8 to participants at an international meeting of national and regional directors of Catholic prison ministries, Pope Francis urged greater efforts to reform prison systems, address the root causes of crime and ensure acceptance and reintegration once a person completes his or her sentence.

“The whole church in fidelity to the mission received from Christ” is called to show the most vulnerable people the mercy of God, the pope said. “We will be judged on this.”

While not arguing against all prison sentences, Pope Francis urged Catholics to reflect on sentencing guidelines and the motivations behind them to ensure they do not promote “a throwaway culture.”

“Many times,” he said, societies “in a supposed search for good and for security, seek the isolation and imprisonment of those who act against social norms,” believing that locking them up is “the ultimate solution to the problems of community life.”

In that way, he said, people think it “is justified that large amounts of public resources are destined to repress offenders instead of truly seeking to promote the integral development of people, which reduces the circumstances that favor committing illegal acts.”

“It is easier to repress than to educate and, I would say, it is more comfortable too,” Pope Francis told the group. “Denying the injustice present in society and creating these spaces to put offenders is easier than offering equal development opportunities to all citizens.”

The aim of a prison sentence should be to educate and prepare people to return eventually to society as law-abiding and contributing citizens, he said, but that often is not the case because of a lack of “resources to address the social, psychological and family problems experienced by detainees.”

“You cannot talk about paying a debt to society from a jail cell without windows,” Pope Francis said. “There is no humane punishment without a horizon. No one can change their life if they don’t see a horizon. And so many times we are used to blocking the view of our inmates.”

A related area that requires much more attention from the church and its members, he said, is helping people after they have been released from prison.

“Often when leaving prison, the person finds himself in a world that is alien to him and that does not recognize him as trustworthy, even excluding him from the possibility of working to obtain a decent livelihood,” the pope said. “By preventing people from regaining the full exercise of their dignity,” they are exposed again to the lack of opportunity that often contributed to their committing a crime in the first place.

Pope Francis concluded his talk by sharing a story he has told before about driving to or past a prison near Buenos Aires and seeing the line of people waiting outside to visit an inmate.

Particularly striking were the mothers of the detainees who would arrive early and “undergo often humiliating security checks,” he said. “These women were not ashamed that the whole world saw them. ‘My son is there’ and they showed their faces for their sons.”

“May the church learn motherhood from these women and learn the gestures of motherhood that we must have for our brothers and sisters who are detained,” the pope said.

PREVIOUS: English cardinal: Priests would die rather than break seal of confession