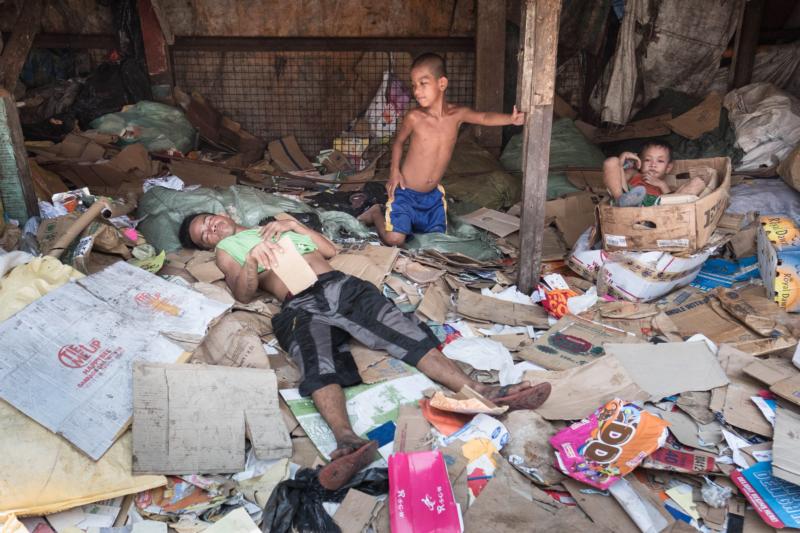 Young people living on the streets of Manila, Philippines, are seen amid garbage May 3, 2019. A Catholic bishop in the Philippines said an increasing number of child workers are exposed to dangerous working conditions. (CNS photo/Stefan Rousseau, Reuters)

MANILA, Philippines (CNS) — A Catholic bishop in the Philippines said an increasing number of child workers are exposed to dangerous working conditions.

Ucanews.org reported that Bishop Roberto Mallari of San Jose, chairman of the bishops’ Commission on Catechism and Catholic Education, said the situation was alarming and sad.

“The root of this sad reality is poverty and lack of livelihood options,” he said, adding that children have the right to the basic necessities of life that society has failed to provide.

“The situation of the suffering children and those who are deprived of their rights and dignity leaves a great challenge to us as a church and as a society,” Bishop Mallari said.

The Labor Department, in a recent report, said there are more than 7,000 child workers, ranging from ages 4 to 17, in and around the capital, Manila.

The report said most of the children work as street vendors, while others are engaged in waste management, construction, transportation, domestic work and manufacturing.

The report also showed that 24 percent of child laborers are not attending school due to lack of financial support or are not interested in education at all.

Meanwhile, estimates put the number of child laborers across the Philippines at more than 2 million.

A study by the International Labor Organization found that about 95 percent of these child laborers are engaged in hazardous work.

Bishop Mallari called for a cooperative effort in solving the problems that lead to child labor.

“God entrusted to us his beloved children,” he said. “Ours is a task of taking care of them and being with them in their values formation.”

In 2018, the U.S. Labor Department warned in a report that a large number of children in the Philippines are still forced into sexual exploitation and drug trafficking.

The report, however, noted that the Philippines had made “a moderate advancement in efforts to eliminate the worst forms of child labor.”

It noted that the government had started a process of profiling child laborers and introduced guidelines to remove them from child labor and connect them with the services they need.

NEXT: Letters foster one young woman’s gratitude for veteran’s years of service