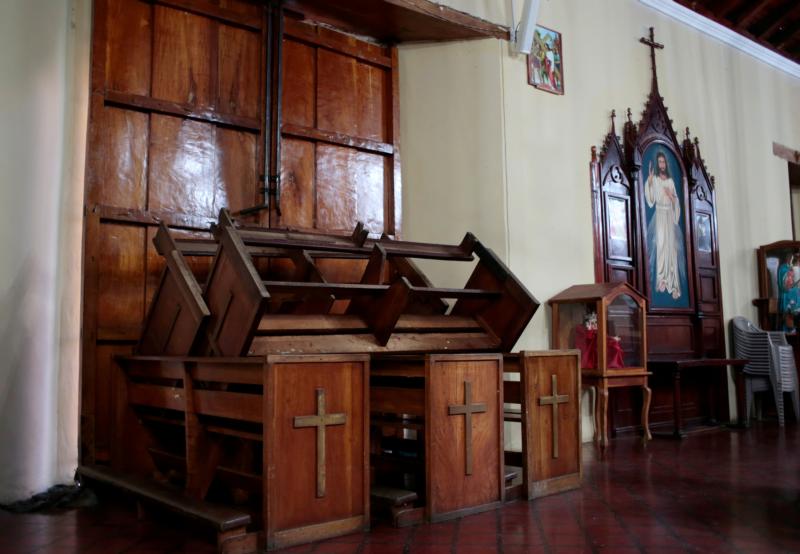 Pews of St. John the Baptist Church in Masaya, Nicaragua, are seen Nov. 21, 2019, after churchgoers were forced to barricade the doors when supporters of Nicaraguan President Daniel Ortega tried to enter the church located south of Managua, the capital. (CNS photo/Oswaldo Rivas, Reuters)

On Nov. 21, Ortega supporters tried to enter St. John the Baptist Parish in Masaya, south of Managua, the capital, forcing churchgoers to barricade the doors with pews.

Some churchgoers and altar boys were struck by the mob, according to media reports, though neighbors intervened and protected those inside as they left the building.

The churchgoers were participants in a pilgrimage organized to support mothers who have waged a hunger strike to pressure the government to release their political-prisoner children.

“They’re asking for a change of priests in Masaya and if we do leave, our consciences will not have been bought,” Father Harvin Padilla said of the government in a video uploaded to social media. “We are free and we will act like pastors.”

Father Padilla also told the churchgoers that the mob was acting like “hyenas” and, in reference to Ortega and his wife, Vice President Rosario Murillo, “We don’t follow a dictator nor a crazy woman. Hence, we’re not afraid.”

The Ortega regime has sowed fear in Nicaragua over the past 18 months. It has violently suppressed protests, which started over objections to a reform of the Central American country’s social security program but morphed into demonstrations demanding Ortega’s ouster.

Human rights groups estimate the crackdown on protests has cost more than 300 lives. The government, meanwhile, has branded the opposition and the Catholic Church as “terrorists” and “coup mongers.”

Nicaragua’s bishops’ conference has tried to broker a national dialogue, but the process has stalled because the government has refused to accept calls for new elections to end the crisis, said Msgr. Carlos Avilez, conference spokesman.

“It’s due to political arrogance,” Msgr. Avilez said of the government’s response to the church support for hunger strikers. “They have economic power, they have a lot of money and they have the power of the army and police on their side. (Yet) out of fear they won’t allow any protests to start.”

The raid in Masaya came as police continue to circle another parish in the city, where hunger strikers have taken refuge inside with a priest. People bringing provisions to St. Michael Parish or stopping by to pray have been arrested or forced away.

It also followed an incursion into the Managua cathedral, which was also hosting hunger strikers.

The Archdiocese of Managua called for a day of prayer and reparation Nov. 21, the day after retaking control of the cathedral.

The United Nations and some governments have called for an end to the harassment of churches in Nicaragua.

“The Ortega regime’s siege of a place of worship is unacceptable, as are the arrests of more than a dozen individuals who were attempting to aid the hunger strikers,” U.S. Department of State spokeswoman Morgan Ortagus said in a statement.

Bishops’ conferences in the region also have sent expressions of solidarity.

“We express our solidarity, accompaniment in prayer and raise our voice of censure for the violation of fundamental human rights,” the bishops’ conference of neighboring Costa Rica said in a statement. “We recognize the role of the Catholic Church (in Nicaragua) in the sense it is giving a testimony of perseverance and hope for those people who don’t have a voice.”

The Latin American bishops’ conference, known as CELAM, also denounced “the violation of fundamental human rights,” and, in a statement, called for international action “so that in Nicaragua, democracy prevails.”

NEXT: Pope arrives in Japan — decades later than he’d hoped