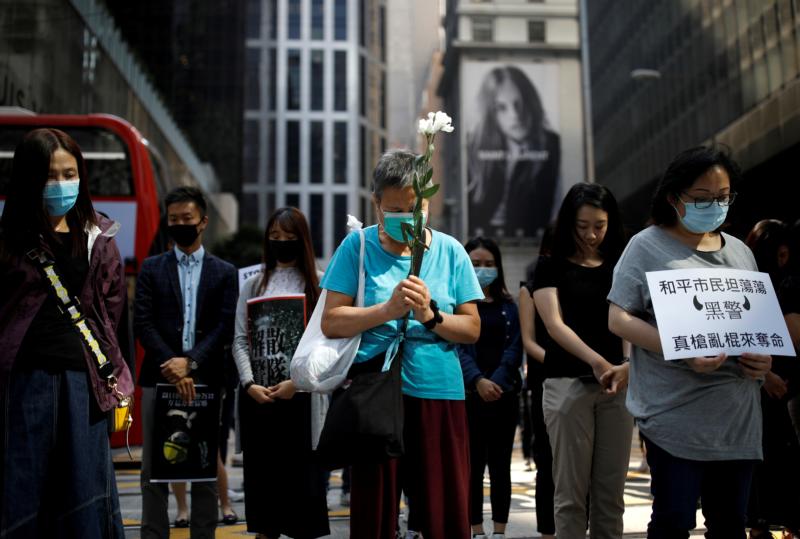 HONG KONG (CNS) — A bishop is calling on the Hong Kong government to set up an independent inquiry into the death of a student during the latest pro-democracy riots.

Ucanews.org reported Auxiliary Bishop Joseph Ha Chi-shing of Hong Kong made his call during a prayer meeting to mourn Chow Tsz-lok, who died Nov. 8 after a suspicious fall at a protest venue.

Chow, 22, a student at the Hong Kong University of Science and Technology, was found injured in a parking lot Nov. 4 as police clashed with protesters. He fell into a coma while being treated at the hospital and died four days later.

“This is something that no civilized society should accept, and anyone with conscience would not accept,” Bishop Ha said at a Nov. 10 prayer service organized by various Christian groups, including the Justice and Peace Commission of Hong Kong, Hong Kong Federation of Catholic Students and the Diocesan Youth Commission.

Chow’s cause of death remains unclear and an investigation should be held to find out the truth, Bishop Ha told the Nov. 10 prayer meeting attended by more than 1,000 citizens at Chater Garden in central Hong Kong.

Ucanews.org reported media say Chow fell from the third floor to the second floor of a parking garage, but what he was doing there in the first place is unknown. His death is believed to be the first fatality linked to police action during the anti-government and reform demonstrations, which have been going on for five months.

Bishop Ha said he hopes the Hong Kong government will commit to establishing the cause of Chow’s death and then reveal it to comfort his grieving family.

The bishop said violent incidents were continuing to occur and the police and demonstrators were increasingly polarized, making the conflict more and more difficult to resolve.

“I have seen a lot of public properties being destroyed, but what I could not see was that countless souls, especially the hearts of young people, were eroded and tortured,” the bishop said.

He also cited international experts as saying that the Independent Police Complaints Council lacked the power and objectivity to conduct the inquiry, so an independent committee needed to be set up immediately.

“Everyone has emotions, and the slogan is also part of the emotion, but we will know that this is not correct when we have calmed down and thought twice about it,” said the bishop. “The truth will set us free and enable us move forward. No one can live in a lie.”

He called for protesters to keep the faith and for authorities to refrain from trying to resolve the crisis by threatening the freedom of others.

“This prayer is not only to mourn his death but also a chance to heal our hearts and pain,” Yuen Tin-yau, former president of the Hong Kong Methodist Church and a retired pastor, told ucanews.org Nov. 10.

He said he believes the death has had a definite impact on the protest movement.

“Whether it was a demonstrator or a police officer, if it was due to conflict, it will definitely cause greater tension in society,” he said.

He called on the government to prevent the conflict from escalating and added that setting up an independent investigation committee would be a big help. “The government will be responsible for expanding the conflict if it doesn’t,” he added.

PREVIOUS: Bolivian bishops say Morales’ resignation was not a coup